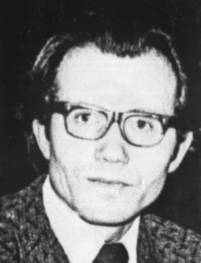 Specialist in Literature, publicist, author of the political work “Pravo zhyty” [“The right to live”] – a pivotal work on the national and political position of the Ukrainian nation within the USSR and the totalitarian basis of “real socialism”, a former political prisoner

Yury Badzio was born into a large peasant family.  In 1958 he graduated from the Faculty of Ukrainian Language and Literature of Uzhhorod University, after which he worked for three years, first as a school teacher, then as director of a school in Transcarpathian villages. At the end of 1961 he moved to Kyiv to begin his PhD in the Institute of Literature of the Academy of Sciences of the Ukrainian SSR, which he successfully defended in 1964, staying on to work as a research assistant in the Institute.

From his arrival in Kyiv, Badzio became actively involved in both academic and civic activity. He published a number of substantial works in literary criticism which were commented upon in the press, while from 1961-64 he was a member of the Council of the Kyiv-based “Klub tvorchoyi molodi” [“Club for Creative Young People” (CCY)] – Ukraine’s first informal organization with a national patriotic philosophy during the period of the “Thaw” under Khrushchev.

In 1965 Badzio took part in the public protest against the arrests of members of the Ukrainian intelligentsia (the events that took place in the Kyiv cinema “Ukraina” on 4 September at the preview showing of S. Paradzhanov’s film “Shadows of forgotten ancestors”).  As a result of this, and for refusing to renounce his views, Badzio was expelled from the Communist Party, dismissed from the Institute of Literature, and gradually deprived of the opportunity of working not only in his field, but in any field requiring an education, and subjected to administrative penalties.  For the five years preceding his arrest, Badzio worked as a loader in a bakery.

In 1971 Badzio sent a letter to the Sixth Congress of the Union of Writers of Ukraine (UWU) in which he addressed the issue of the unequal position of Ukrainian culture in conditions of national and political lack of freedom.

In 1972, as a response to the second wave of political arrests, Badzio began writing his work “Pravo zhyty” [“The Right to live”].  The first version of his study which came to 1400 pages of manuscript and which took him five years to write was stolen from the flat of a friend. Badzio is convinced that this was the work of the KGB.  Badzio began work again on his study, only to have 450 pages of the second unfinished version confiscated during a search in February 1979. Two months later, on 23 April 1979, Badzio was arrested. In the period between the search and his arrest, he had written “An open letter to the Presidium of the Supreme Soviet of the USSR and the Central Committee of the Communist Party of the Soviet Union”, as well as “An open letter to Ukrainian and Russian historians”, in which he presented the key ideas of “Pravo zhyty” in brief.

His trial took place from 19-21 December 1979, with only “a special audience” being admitted into the courtroom.  Badzio was charged on the basis of his manuscript “Pravo zhyty”, with keeping and distributing the “Program for assimilation of Ukrainians and Belorussians in Poland”, published in Lviv in 1937 and the manuscript “Economic monologues” by M. RUDENKO, as well as with speeches made at Party meetings in 1965 with regard to the protests against political repression. Badzio denied any guilt, and his wife, Svitlana KYRYCHENKO refused to testify. He was sentenced by the Kyiv City Court under Article 62 § 1 of the Criminal Code of the UkrSSR (“Anti-Soviet agitation and propaganda”) to the maximum term – 7 years of harsh regime labour camp and 5 years exile. The Supreme Court of the UkrSSR refused to change the sentence, and on 21 March 1980 Badzio was taken to Camp No. ZhKh-385/3-5 in Mordovia (one of the Mordovian political labour camps).

Badzio was to continue his struggle from his imprisonment: he took part in a political strike during the Moscow Olympic Games, held hunger strikes as a form of protest, and wrote hard-hitting political statements to higher State authorities criticizing the regime. In July 1980 Badzio’s protest against Soviet troops having been sent into Afghanistan was published in the West.  From time to time other statements were also published in the Western press.

As punishment for this, Badzio was on many occasions not allowed visits from relatives, put in a punishment cell, and his wife and children were subjected to persecution. During Badzio’s captivity, his wife S. KYRYCHENKO (who in the 1960s had been a research assistant in academic institutes of literature and philosophy) was dismissed from 11 places of work, even from jobs as post woman and cleaner; in 1983, their son Serhiy was expelled from the Komsomol, and subjected to a shameful parody of a trial where they demanded that he renounce his parents.

In 1986, Badzio arrived at his place of exile in the village of Khandyga, Yakutia. At the beginning of 1987 he refused to request a pardon (the Gorbachev initiative), and was freed at the initiative of the authorities in December 1988.

Yury Badzio has lived in Kyiv since January 1989, and is actively involved in political and civic life. He has given numerous interviews and published articles analysing the political situation in Ukraine, and spoken at many political rallies.  In spring 1990 he was part of an initiative group aimed at creating a political party in opposition to the Communist Party of Ukraine which issued its “Manifesto of the Democratic Party of Ukraine” which Badzio wrote in May of that year. In December, at the Founding Congress of the Democratic Party of Ukraine, Badzio was elected its leader. However at the second congress, Badzio stood down in order to return to his academic activities which he had been forced to abandon thirty years earlier.  He presently works in the Institute of Philosophy, and continues to write publicist articles on political issues. After Ukraine’s declaration of independence, the regime returned Badzio the manuscript of “Pravo zhyty” which had been confiscated in 1979.  This was published as a separate monograph in 1996.