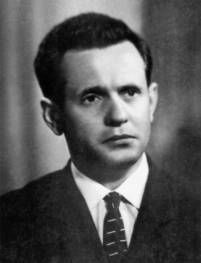 Active in the national liberation and religious movements of Ukraine, prepared and distributed samizdat material, twice a political prisoner

Hel’s father was a former fighter in the Ukrainian Resistance Army (UPA), and later the chairperson of the cultural and educational association «Prosvita» [“Enlightenment”] in his village.  After 1939 he became the head of a collective farm while at the same time working for the underground of the Organization of Ukrainian Nationalists (OUN). Hel’s mother was from an old family of the Ukrainian intelligentsia with deep roots in the national liberation struggle.

In 1950 Hel’s father was sentenced to 20 years deprivation of liberty for helping the OUN. Hel’s first encounter with the Soviet authorities was at the age of thirteen, when during the arrest of his father, the MGB (earlier name of the KGB) officers beat up both his mother, and then Ivan when the latter tried to protect his parents.

Hel’s first conscious act of civic disobedience was his public refusal to join the Komsomol, for which in 1952 he was expelled from school after completing the first term of his tenth (final) grade. After finishing evening school he attempted to apply for a place at Lviv University, however his application papers were not accepted, the grounds being given that he was the son of a Bandera-supporter[1]. He found himself a job as a mechanic in a Lviv factory for loading vehicles.

From 1956 – 1959 Hel served in the army. After demobilization he again tried to get into university, this time applying for the Law Faculty, however the doors for him were closed. He then entered the external department of the History Faculty of Lviv State University. In his second year he transferred to the evening section and began working as a mechanic at the Lviv electrovacuum factory.  It was around this time that he became involved in civic activity.

In 1961, on the hundredth anniversary of the death of the great poet, Taras Shevchenko, Hel and his friend laid a crown of thorns at his monument in Kyiv.

It was at that time that Hel met M. HORYN, who was already in contact with the Kyiv Sixties activists I. SVITLYCHNY, I. DZIUBA, Y. SVERSTYUK, V. SYMONENKO and others.

Hel now began to actively type out and use photographic means to duplicate samizdat material which he then distributed. These included “Stan i zavdannia ukrainskoho vyzvolnoho rukhu” [“The present state of the Ukrainian Liberation Movement and the tasks ahead”] by Y. PRONYUK, “Shcho take postup?” [“What is progress?”] written by Ivan Franko in 1903, with its criticism of the program created at that time by Vladimir Lenin’s party, “Vyvid prav Ukrainy” [“The Bases for the rights of Ukraine”] and “Ukraina i ukrainska polityka Moskvy” [“Ukraine and Moscow’s Ukrainian policy”].  At the same time, he and M. HORYN formulated their program as being “the struggle for Ukrainian Statehood”.

On 24 August 1965, in his sixth year of studies, Hel was arrested together with other Ukrainian dissidents. He was sentenced on 25 March 1966 by the Lviv Regional Court under Articles 62 § 1 (“Anti-Soviet agitation and propaganda”) and 64 of the Criminal Code of the Ukrainian SSR to 3 years harsh regime labour camp for distributing Ukrainian samizdat and for “organizational activity”.

He served his sentence from 1966 – 1968 in the Mordovian political labour camps where he met many representatives of the democratic movement in the USSR.

In 1967 he wrote letters on two occasions to the Presidium of the Verkhovna Rada of the UkrSSR in defence of the Ukrainian Greek-Catholic Church and demanding the abolition of Article 62 of the Criminal Code.

Following his release, Hel was not allowed either to return to his studies at the university or to get registration in Lviv. He lived in the town of Sambir in the Lviv region.

He printed in samizdat and distributed 11 books, among them “Sered snihiv” [“Amid the snow”] by V. MOROZ, which included all the latter’s publicist writing and poetry (the preface to the book was an article by Hel himself, entitled: “Totalitaryzm, ukrainsky rukh i Valentyn Moroz” [Totalitarianism, the Ukrainian movement and Valentyn Moroz”]), the work by I. DZIUBA “Internatsionalism ili rusifikatsiya?” [“Internationalism or Russification?”] and a selection of poems by Mykola Kholodny “Kryk z mohyly” [“Cry from the grave”], as well as many articles.

In November 1970 Hel sent a letter of protest to the Supreme Court of the UkrSSR in connection with the sentence meted out to V. MOROZ.  On 7 December of that year Hel spoke at the funeral of A. HORSKA, calling the murdered artist a faithful daughter of the Ukrainian renaissance of the 1960s and comparing her fate with that of her people.  In retaliation he was issued with a severe reprimand for alleged unexplained absences from work.

Hel was arrested on 12 January 1972 and in August was sentenced under Article 62 § 2[2] of the Criminal Code of the UkrSSR to 10 years special regime labour camp and 5 years exile.

He served this sentence both in the Mordovian and the Perm political labour camps, and the period of exile in the village settlement Mylva, in the Troitsko-Pechersk district of the Komi Autonomous Soviet Republic.
In the camps Hel took part in many human rights protest actions and hunger strikes, in particular, a hunger strike demanding political prisoner status. One of his hunger strikes lasted 100 days: he was demanding the registration of his marriage to his common-law wife and the mother of his daughter. The marriage was formally registered in 1975. In all Hel was on hunger strike for over 300 days.

In 1977 in the Mordovian special regime camp (the station of Potma) conflict arose in connection with the extreme nationalism and anti-Semitism of certain prisoners, including V. MOROZ, which led to the latter being ostracized. Hel defended MOROZ, and was also criticized.

Hel is the author of the book “Grani kultury” [“Facets of culture”], written in the 1970s during his captivity. The book was distributed through samizdat and smuggled abroad, where it was first published under the pseudonym Stepan Hoverl in London 1984 by the local Ukrainian Publishing Association. In Ukraine the book was first published with the name of its real author in Lviv in 1993.

He returned from exile to Ukraine on 17 January 1987 during the period of “perestroika”. He lived for a year in his native village working as a shepherd. In spring 1987, together with V. CHORNOVIL, M. HORYN and P. Skochko, he joined the editorial board of the restarted journal “Ukrainsky visnyk” [“Ukrainian Herald”].

From 1988 he played an active role in public life (as leader of the Committee in defence of the Ukrainian Greek-Catholic Church, editing the journal “Khrystiyansky holos” [“Christian voice”] and was involved in the creation of the organization “Memorial” and the Narodny Rukh Ukrainy [The Popular Movement of Ukraine] (Rukh)

From 1990 – 1994 he was the first deputy to the Leader of the Lviv Regional Council of Deputies. He is now chairperson of the regional committee on restoring the rights of victims of repression.

[2]  Also “Anti-Soviet agitation and propaganda”, but Part 2 was applied when the person was charged a second time.  The sentence was much harsher, and the person was designated a “particularly dangerous repeat offender”. (translator’s note)