Marynovych was brought up in a religious family, and his grandfather was a priest. After finishing secondary school in Drohobych with a gold medal, he worked for a year in Drohobych. The first entry in his employment record book reads: “dismissed secretary of the Komsomol committee of the factory”.

In 1967 he entered the Lviv Polytechnic where he was to speak out with criticism of Soviet politics, while defending communist ideals. This led in 1970 to his first run-in with the KGB. Marynovych was deprived of his ‘access’ (to secret information) and removed from the military part of the faculty, this meaning that he did not receive officer rank and after graduation had to serve as a rank and file soldier in the army. He graduated from the Lviv Polytechnic in 1972 and worked for a year as an English translator at the Ivano-Frankivsk factory “Positron”.  It was around this time that he met Lviv and Kyiv dissidents. On 22 May 1973 he was detained by the police and searched while placing flowers at the memorial to Taras Shevchenko.

From 1973 – 1974 he did his military service in Vologda.   At the end of his service in 1974 Marynovych moved to Kyiv. He worked there as technical editor for the journal ‘Pochatkova shkola’ [‘Elementary school’], as well as in the publishing company ‘Tekhnika’, from which he was dismissed following a ‘directive’ from the KGB. He was unemployed for some time, managing to find work pasting playbills just before his arrest. On 9 November 1976 Marynovych, together with a friend, M. MATUSEVYCH, were among the founding members of the Ukrainian Helsinki Group (UHG).  He was to help in drawing up all UHG documents and beginning with the initial UHG Declaration, he signed all UHG Memoranda issued before his arrest.
From that time on Marynovych was kept under close scrutiny by the KGB. He was detained by the police on several occasions in Kyiv and Serpukhiv, while in Drohobych searches were carried out, and he himself was constantly threatened.

In March 1977 at an evening dedicated to Taras Shevchenko at the Kyiv Philharmonia, Marynovych and M. MATUSEVYCH, ignoring the protests of the evening’s organizers, appeared without warning on the stage and called on those present to sing Shevchenko’s ‘Zapovit’ [‘Testament’][1].

On 23 April Marynovych was arrested. He and M. MATUSEVYCH were both charged with “anti-Soviet agitation and propaganda” under Article 62 § 1 of the Criminal Code of the UkrSSR and Article 70 § 1 of the Criminal Code of the RSFSR. The investigation lasted 11 months, during which Marynovych refused to give any evidence and did not even familiarize himself with the case documents.  At the trial held between 22-27 March 1978, where he denied any guilt, he was sentenced by the Kyiv Regional Court in the town of Vasylkiv to the maximum period of imprisonment – 7 years harsh regime labour camp and 5 years exile.

Marynovych served his sentence in the Perm political labour camps, Camp No. VS-389/36 [“Perm-36”].. There he took part in all human rights actions, signing numerous letters and appeals from political prisoners, holding protest hunger strikes, including one lasting 20 days, and smuggled to the outside world a chronicle of the camp. Over the entire sentence, he was held for around 150 days in the SHIZO punishment cell and approximately a year and a half in a PKT  (these were two types of punishment cells). In 1978 Amnesty International declared Marynovych one of their prisoners of conscience. From April 1984 he lived in exile in the village of Saralzhyn, Wilsk district of the Akhtyubinsk region of Kazakhstan where he worked as a joiner.  His wife, herself from Kyiv, Lyuba Kheina, joined him in exile. In February 1987 during the Gorbachev campaign he refused to ask for a pardon. He returned to Ukraine in May 1987. He found work as an operator in a petroleum refinery in Drohobych, then in 1990 began working as correspondent of a local newspaper ‘Halytska zorya’ [‘Halychan dawn’].

In 1990 Marynovych’s work ‘Yevangeliye vid yurodyvoho’ [‘The Gospel according to God’s Fool’], written in the labour camp, was published. In Drohobych his book ‘Ukraina na polyakh Svyatoho Pysma’ [‘Ukraine on the margins of the Holy Scripture’] came out in 1991, followed in 1993 by ‘Spokutuvannya komunizmu’ [‘Atoning for communism’], ‘Ukraina: doroha cherez pustelyu’ [‘Ukraine: a long way through the desert’].

Marynovych was the founder of the first Amnesty International group in the USSR in 1991, and of the Ukrainian Association of Amnesty International (UAAI), serving as chairperson of the National Committee of the latter from 1993 to 1998.  Marynovych is a member of the civic council of the Ukrainian-American Bureau for Protection of Human Rights and was awarded a prize from the journal Suchasnist for his work ‘Spokutuvannya komunizmu’ and the Valery Marchenko Prize in 1995.  He has taken part in many Ukrainian and international conferences on human rights and religious studies, lectured in the history of Christianity in the Drohobych Teachers’ Training Institute, and works for the Institute of East European Research. Since 1997 Marynovych has been the Director of the Institute of Religion and Society of the Lviv Theological Institute (now the Ukrainian Catholic University) and a member of the Ukrainian Theological Academic Association.

[1]  It was in keeping with this poetic ‘testament’ that students carried Shevchenko’s body back from exile in Russia and buried him high above the Dnipro river in Kaniv.  The testament is, however, about much more, calling on the poet’s countrymen and women to rise and break free of the fetters binding them. (translator’s note) 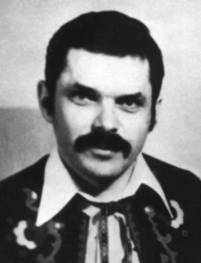