Historian and prominent figure in the Ukrainian national movement, one of the most radical of its representatives, twice a political prisoner

Moroz was born into a peasant family. On finishing school, he entered the History Faculty of Lviv University, graduating in 1958. He was not accepted on the regular course and forced to study for his PhD as an external student due to a bad grade in the history of the Communist Party of the Soviet Union. His general area of research was the history of the Ukrainian national movement in the twentieth century. He worked as the head of studies and teacher in a village school, then from 1964 as lecturer in the Lutsk, and later Ivano-Frankivsk Teachers’ Training Institutes.

Moroz was arrested on 1 September 1965 and sentenced by the Volyn Regional Court under Article 62 of the Criminal Code of the Ukrainian SSR (“anti-Soviet agitation and propaganda”) to 4 years labour camp. He was accused of “bourgeois nationalism” supposedly demonstrated by his belief that Ukraine should not be part of the USSR and his protest at the Russification of Ukraine, as well as by his distributing samizdat material. He served his sentence in camp No. ZhKh-385-17-A in the Mordovian political labour camps, from where his “Reportazh iz zapovednika imeni Beriya” [“Report from the Beria reserve”] was smuggled out and circulated in samizdat.  It was addressed to V. CHORNOVIL who in turn directed it to Deputies of the Verkhovna Rada of the UkrSSR. The work gave a searching analysis of the Soviet system and the nature of Soviet despotism. One of the main ideas of the article was the devolution of human life within the Soviet system, the destruction of the individual and the subsequent appearance of ‘hollow people’.

“Reportazh iz zapovednika imeni Beriya” was published anonymously abroad and received considerable publicity. An investigation was started, but Moroz’s authorship could not be proven. For taking part in protest actions within the camp, however, Moroz was sentenced to three years in Vladimir prison.

Moroz believes that the sixties were the first wave of Ukrainian rebirth after the long winter of Stalinism, a revolution, so to speak, of poets. The main figures of this rebirth he considers to have been I. DZIUBA, Y. SVERSTYUK and A. HORSKA. This first wave gave forth its creations in the form of samizdat, the crown form of which and the whole memorandum of the generation was I. DZIUBA’s book “Internatsionalism ili rusifikatsiya?” [“Internationalism or Russification?”].

After his release in 1969 he wrote the articles “Sered snihiv” [“Amid the snow”], “Khronika oporu” [“Chronicle of resistance”] and “Moisey i Datan” [“Moses and Dathan”] which appeared in samizdat and received a mixed response from the Ukrainian intelligentsia (particularly his damning condemnation of I. DZIUBA’s recantation, and also his thinking on the issue of national identity).

However his new arrest on 1 June 1970, particularly the trial behind closed doors with violations of the law, as well as the harsh sentence (14 years) under the same Article 62 § 2 of the Criminal Code, elicited sharp criticism not only in Ukraine, but abroad.

Moroz was charged with the above-mentioned articles which were labelled “anti-Soviet”.  It should be mentioned that in 1969 the KGB had suspended their investigation into “Reportazh iz zapovednika imeni Beriya”, yet now Moroz was charged on the basis of this work.
When on 17 November 1970, the trial began in Ivano-Frankivsk and it became clear that nobody was to be admitted into the courtroom, Moroz expressed protest at the illegal holding of a trial behind closed doors and under such conditions refused to have any part in it, to answer any questions or give any explanations.  The witnesses V. CHORNOVIL, I. DZIUBA and B. ANTONENKO-DAVYDOVYCH also refused to give testimony in an illegal trial, stating that they would have been able to give important evidence since their testimony during the pre-trial investigation had been misrepresented. Moroz’s close friends were not allowed to be present even at the reading out of the sentence.  He was sentenced to a 6 year prison term, followed by 3 years special regime labour camp and 5 years exile, with Moroz being declared a particularly dangerous repeat offender. The Ukrainian intelligentsia was vehement in its condemnation of the unlawfulness and ferocity of the court, with over 40 protests being addressed to the Supreme Court of the UkrSSR, while in the USA and Canada there were protest demonstrations near Soviet embassies and consulates.

Moroz served the prison sentence in the Vladimir Prison where he was held in a cell with those imprisoned for actual crimes who tortured him, with one stabbing Moroz in the stomach so badly with a sharpened spoon that he had to be taken to hospital and given stitches. After this, at both his request and that of his wife, he was placed in a solitary cell where he spent almost two years. On 1 August 1974 Moroz began an indefinite hunger strike demanding that he be transferred from the prison to a camp. Despite a torrent of protest and appeals on behalf of Moroz both in the USSR, and abroad, KGB representatives told his wife that he would serve his prison sentence to the end.

On 22 November 1974 Moroz ceased his hunger strike and informed his wife that he had been moved from solitary confinement, and given a decent cellmate.

At the end of his prison sentence, Moroz was sent to the special regime camp in Mordovia where he took part in hunger strikes and protest statements on the anniversary of the beginning of repressions in Ukraine and on other dates. Extremely intolerant views and behaviour from certain prisoners, including Moroz, led to the creation (as an informal initiative from other prisoners) in 1977 at the Mordovian special regime camp (station Potma in the settlement Sosnovka) of a three-person committee – the Priest V. ROMANYUK, E. KUZNETSOV and D. SHUMUK. The committee’s objective was to bring about an improvement in the relations between political prisoners, to foster unity between different nationalities and mutual respect and recognition of the human rights of each individual among prisoners with different ideological positions who had been sentenced on the basis of their ideological convictions. The committee’s objective was also to oppose the anti-Semitism of some political prisoners.

The committee issued a sharp reprimand to Moroz for behaviour not in keeping with the status of a political prisoner. He was accused of stirring up national enmity (in particular, towards Russians and Jewish people) and of showing a lack of respect for the views of his comrades in adversity. The anti-Semitic position taken by Moroz was to cast a shadow over Ukrainian dissidents who were in the majority in the camp and generally damaged the democratic movement since Moroz had been much supported in the West. The committee called for a general boycott of Moroz and for his name not to be mentioned in samizdat and other material.

Finally, after a five-month hunger strike in 1979 and under pressure from the world community, the Soviet authorities were forced to exchange Moroz, as well as four other dissidents, for two Soviet KGB agents.

In the night from 27 to 28 April 1979 at the JFK Airport in New York representatives of the Soviet authorities handed over five political prisoners – A. Ginsburg, G. VINS, V. MOROZ, M. Dymshyts and E. KUZNETSOV in exchange for Soviet citizens Cheryaev and Enger, former UN employees, sentenced in the USA to long terms of imprisonment on charges of spying. None of the prisoners had known anything about the planned exchange nor been asked for their assent – the action was formally organized as deprivation of citizenship and deportation from the country. The labour camp part of Moroz’s sentence had been scheduled to end at the beginning of June, with 5 years exile after that.

Abroad Moroz was greeted as a hero. He settled at first in America and lectured at Harvard University. However his controversial behaviour, eccentricity and uncompromising stand antagonized western society. It would seem, however, that over the years, judging by an interview given in 1991 at any rate, he has become less militant and more tolerant.

He lived in Canada working as a radio journalist, and visited Ukraine giving lectures on “Ukraine in the 20th century”. Since 1997 he has lived permanently in Lviv and lectures in the university. 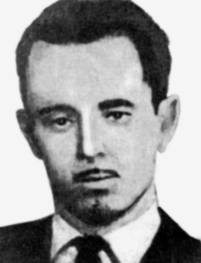