Archbishop-Major, Cardinal and Metropolitan of the Ukrainian Greek-Catholic Church (UGCC), he spent 18 years in the labour camps and in exile

In 1911 he entered the Lviv Holy Spirit Seminary and was ordained in 1917.  He took the name “Slipy” (meaning “blind”) after the village nickname for his grandfather. He continued his theological education in Innsbruck where in 1918 he received his Doctorate in Theology, as well as in Collegio Angelico and the Gregorian University in Rome. From 1922 he was Professor of Dogmatic Theology at Lviv Holy Spirit Seminary, then from 1925 the Rector of the Seminary. It was through Slipy’s efforts that in 1928 the Lviv Greek Catholic Theological Academy was created, with Slipy appointed its first Rector in 1929.  He took an active part in the organization and running of Uniate (Greek-Catholic) Church congresses, calling for the union of the Churches of East and West.

On 25 November 1939 he was appointed Archbishop by Metropolitan Sheptytsky. During the War and occupation of Halychyna by the Nazis, Slipy continued to carry out his pastoral duties which he believed lay first and foremost in protecting Ukrainian young people from being killed either in the War or in internecine fighting (between different ideological groups). After the return in 1944 to Lviv of the Soviet Army, the UGCC was accused of having collaborated with the Nazis, with supporting the nationalist underground and so forth.

On 1 November 1944 Slipy became Metropolitan of Halychyna – the last Metropolitan of the Ukrainian Greek-Catholic Church (UGCC) before it was effectively banned by the regime.

On 11 April 1945 Slipy was arrested, together with the entire episcopate (in all, over 800 members of the clergy), and for almost a year was interrogated, with the authorities trying to force a “confession” of “guilt” out of him and a renunciation of the “non-existent” Church.  He was accused of being an agent of the Vatican, as well as of the German intelligence service, and of being a leader of an anti-Soviet nationalist underground movement. Slipy did not in any way deny his commitment to Catholicism and the Vatican, even stressing that the Vatican fought “against materialistic ideology and communist ideas”.  No real evidence was presented by the prosecution.

In addition, Slipy was charged with having written before the beginning of the Second World War for the journals “Meta” [“Goal”], “Dzvony” [“Bells”] and “Nyva” [“Cornfields”], as well as his activity as Rector of the Seminary and Academy, and his participation in the organization “Council of Senators” which supported Ukrainian autonomy. Supposedly, Slipy had supported the Ukrainian National Republic, proclaimed in Lviv on 30 June 1941, and headed by Stetsko, and when the latter’s government was arrested by the Nazis, religious and political figures in Lviv had decided to create a “Ukrainian National Council”.  The charges also mentioned the brochure written by Slipy; “Holovni pravyla suchasnoho dushpastyrstva” [“Main rules for the modern priesthood”] from 1940, however the actual brochure was not included in the case file and the military tribunal did not study its content.

On 3 June 1946 He was sentenced by the Military Tribunal of the Forces of the Ministry of Internal Affairs Kyiv Military District under Article 54-1 of the Criminal Code of the UkrSSR (“Treason against the homeland”) to 8 years labour camps and 3 years loss of civil rights.

He served his sentence in Dubravlag - the Mordovian political labour camps. At the end of the term of imprisonment, permanent exile was imposed which he began in the village of Kuzminki, 300 kilometres from Krasnoyarsk. From there he wrote religious-philosophical works for his priests, academic papers, and correspondence with the authorities with regard to the rehabilitation of the UGCC and other matters.

After Stalin’s death, it did look as though the regime would reconsider its position of the UGCC. The Soviet Union had decided to establish diplomatic relations with the Vatican, and the latter had made the rehabilitation of the UGCC one of its conditions. Since the Kremlin knew little about this Church it decided to get an “expert assessment”, and for this they, naturally, chose Metropolitan Slipy.

In May 1953 Slipy was taken to Moscow where high-ranking representatives of the Ministry of Foreign Affairs asked him to write a history of his Church. Slipy was able, albeit under constant surveillance, to work in the Lenin Library where he was given access even to special (i.e. restricted access) collections. The Metropolitan set about this task with enthusiasm and gathered a great deal of factual material. However in the space of three months Moscow’s interest in establishing diplomatic relations with the Vatican had cooled and Slipy was sent back to Siberia, this time to a “special hospital” – a home for those with chronic illnesses or disabilities, where over the next five years he wrote 5 volumes of his work “Istoriya Vselenskoyi Tserkvy v Ukraini” [“The History of the Ecumenical Church in Ukraine”].  Slipy sent the first volume to Moscow, to those who had commissioned the study, however when he received nothing even to confirm that the manuscript had arrived, he stopped sending the volumes. He left them with various people who were later to suffer for this.

In 1958, any “thaw” in religious matters ended and on 18 June 1958 Slipy was again arrested and charged with “anti-Soviet agitation and propaganda”, the main “proof” of which was supposed to be his “Istoriya Vselenskoyi Tserkvy v Ukraini”, which had originally been commissioned by the Soviet Ministry of Foreign Affairs.  The Metropolitan was also accused of having “spurned the team” and “not taken part in civic work and labour processes”. In order to give the trial of Slipy at least some formal attributes of legality, the manuscript of his History was given to “professionals” for an expert assessment, who concluded that the work was of an “anti-Soviet and anti-scientific nature”.  Slipy again stood before a court conducted behind closed doors, and once again stood up for his Church as the only defender of the Ukrainian people.

On 17 July 1959 the Supreme Court of the UkrSSR sentenced Slipy under Article 7 §1 of the Law of the USSR “On criminal liability for State crimes” to 7 years labour camp.  He served this sentence in Ozerlag in the Krasnoyarsk area and in the Mordovian political labour camps.

On 27 September 1962 a panel of judges of the Supreme Court of the UkrSSR issued a ruling which was delivered, marked “Secret” to the camp, ordering that he be moved, as a particularly dangerous criminal, to a special regime camp.

Politicians, Catholic and other religious leading figures in the West sought to have Slipy freed. There was an appeal from 118 Deputies of the French Parliament, a personal appeal from Pope John XXIII and from US President John F. Kennedy calling for his release. As a result of these efforts, the Presidium of the Supreme Soviet of the USSR issued a resolution on 13 January 1963 “pardoning” him, and within three days he was released. Not only that, but he was allowed to leave to take up permanent residence in the Vatican where he arrived in February 1963.

Slipy became Head of the Congregation of the Roman-Catholic Church on contacts with the Eastern Churches, and in 1965 was made a Cardinal. He continued to speak out in defence of the Church and of believers, in particular, during the Andrei Sakharov Hearings in Rome in 1977, and wrote appeals to Catholic figures and to State leaders.

In 1975 Slipy created the Ukrainian Catholic University in Rome, with branches in different countries, and renewed the publication of the journal “Bohoslovya” [“Theology”].

On 27 August 1992 his body was reburied in the Saint Yury Cathedral in Lviv. 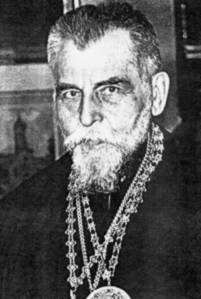