Iryna Stasiv’s family were members of the Ukrainian Greek-Catholic Church (UGCC) which was persecuted in the USSR. Her father was a worker while her mother came from a peasant family. Among her relatives there were people connected with the Organization of Ukrainian Nationalists (OUN). In the years after the War she witnessed the mass deportation of Ukrainians to Siberia. From childhood she passionately dreamed of the day Ukraine would become independent. “In school all that was most sacred was defiled but then at home explained in whispers”, she recounted later.

After finishing school in 1957, she worked for two years as a laboratory technician at a factory, and then for half a year in the Institute for Blood Transfusions.  Her student days from 1959 – 1964 at the Slavonic Languages and Literature Faculty of Lviv University coincided with Khrushchev’s “Thaw”. The social processes taking place in Hungary and Czechoslovakia kindled similar thinking among Western Ukrainian students.

Following her graduation, she worked in schools and youth clubs however was often forced to leave after telling the students about the history of the national liberation movement. From 1966 she could not find a permanent job, either being taken on as a part-time worker or to replace staff who were ill. She worked in a weaving factory and in an after-school centre (where children stayed while their parents were at work).

In 1961 she married Ihor KALYNETS.  That same year she met Yevhen SVERSTYUK, Alla HORSKA, Ivan DRACH and others at a meeting in Kyiv to commemorate the 150th anniversary of the death of the poet Taras Shevchenko. Stasiv-Kalynets gave a presentation on translations of Shevchenko’s works into Polish.

In July 1970 she was one of 9 people from Lviv who signed a letter of protest against the arrest of Valentyn MOROZ.  In the autumn of that year she and her husband sent a formal request to the Prosecutor’s office of the Ukrainian SSR for permission to be present at the court hearing into the case involving V. MOROZ.  On behalf of the latter’s relatives and friends, she wrote letters to the Head of the Council of Ministers of the USSR, A. Kosygin and to the Verkhovna Rada of the Ukrainian SSR, protesting against violations during the course of the court proceedings. In December 1971 she signed the statement announcing the creation of “the Public Committee in defence of Nina Strokata”

During a search carried out on 12 January 1972, an article by Vasyl STUS “Fenomen doby” [“Phenomenon of our time”], a samizdat book by Stasiv-Kalynets “Oranta”, western publications of her husband Ihor KALYNET’s poetry, as well as letters, photographs, were removed. She was arrested the same day. During the investigation, she went on hunger strike three times, demanding to be given a pen and paper, etc. Having received the latter she used them to write a letter of protest to the Central Committee of the Communist Party of Ukraine. While in custody she wrote a cycle of poems under the title “Poklyk” [“The Call”]. She was accused of writing anti-Soviet poetry, with the authorities particularly objecting to her collection “Doroha vyhnannya” [“The Road of exile”[, dedicated to Viacheslav CHORNOVIL, and in particular the poem “Odyssei” [“Odysseus”].  At the trial, she was also charged with copying and circulating samizdat material, as well as with verbal statements regarding the need for Ukraine to secede from the USSR.  The investigators provided no serious evidence of anti-Soviet activity, while at the trial several witnesses detracted testimony given against Stasiv-Kalynets.

The trial took place between 31.07.-2.08.1972.  She was tried by the Lviv Regional Court together with Stephaniya SHABATURA and sentenced under Article 62 § 1 of the Criminal Code of the UkrSSR (“anti-Soviet agitation and propaganda”) to 6 years labour camp and 3 years exile.

Six months later her husband, Ihor KALYNETS received the same sentence. Their small daughter was separated from her parents for 9 years.

Stasiv-Kalynets served her sentence in the Mordovian political labour camps (Camp No. ZhKh-385/3, the settlement of Barashevo, together with S. SHABATURA, N. SVITLYCHNA and N. STROKATA). She worked stoking boilers and painting, and as a seamstress, kitchen-gardener and cook. During those years her poems appeared in samizdat and were published abroad.  In 1973 a book was published by the publishing house "Smoloskyp" about the Kalynets family. Stasiv-Kalynets took part in all collective protest actions held in the women’s political prisoners’ camp. She signed a letter to the Prosecutor’s office accusing the camp authorities of preventing prisoners celebrate Easter;  a letter to the Secretary General of the UN asking that he take measures to ensure the conducting of fair trials in the presence of representatives of the UN; a collective letter in support of Andrei Sakharov, an appeal to the camp administration for permission both to make donations to the Support Fund for victims of the Pinochet coup in Chile, and to send delegates to the Congress of the International Women’s Democratic Association. She took part in a hunger strike demanding that they be given political prisoner status, refused to do hard physical labour in connection with International Women’s Year, wrote a letter to the UN Human Rights Committee protesting at the camp conditions and asking for a representative to be sent to the camp, and held hunger strikes in protest at refusals to allow visits from relatives and friends.  For such actions, she was frequently subjected to vicious repressive measures by the camp authorities.

She spent her term of exile together with her husband in the Chytynsk region, working milking cows and painting houses.

At the end of her sentence, she returned to Lviv, where the gruelling struggle to get registration (enabling her to live in the city) began. She was only able to find work following a directive from the KGB: she worked as a cashier and secretary in the regional teachers’ centre.

From 1987 Stasiv-Kalynets took an ever more active role in the revival of free cultural and civic life in Lviv. In November 1987 she and her husband became founding members of the Ukrainian Association for the independent creative intelligentsia. She gave public lectures on V. STUS, took part in organizing a Club for Young Academics, then later the “Towarystvo Leva” [“Lion Society”][1].  She was also active in creating and working with the group “Yevshan-zillya”[2] in publishing an independent cultural journal, as well as in the creation of the Association of the Ukrainian Language, “Memorial” and the Popular Movement of Ukraine (Rukh).  Stasiv-Kalynets was also involved in the movement for the revival of the Ukrainian Greek-Catholic Church (UGCC). She also published a lot of articles in periodical journals. From 1988 – 1989 virtually every day in Lviv there were some kind of rallies or meetings (prayers in memory of prominent figures who had come from Lviv , rallies in support of the UGCC, poetry evenings, meetings at the Monument to Ivan Franko, rallies to mark historical events in the life of Lviv, etc), many of which the authorities had not given permission to hold. Stasiv-Kalynets took an active part in all of these events and was on several occasions detained. On 22 January 1989 after a rally to mark the day in 1919 when the Western Ukrainian National Republic was proclaimed, she was sentenced to 10 days custodial arrest. She was also detained on the day in February 1989 when Mikhail Gorbachev visited Lviv.

In 1990 Stasiv-Kalynets was elected State Deputy of the Verkhovna Rada of Ukraine. From May 1990 she became the Head of the Lviv Regional Department of Education. She played an active role in carrying out school reform, in establishing a number of new educational institutions (different types of lyceums), creating the education newspaper “Osvita” [“Education”], as well as an International Centre for Education, Science and Culture. From 1992 to 1994 she was the chairperson of a subcommittee in the Verkhovna Rada’s Education Commission.  In Stasiv-Kalynets’ world view, the rights of the nation are given priority over the rights of the individual.

Stasiv-Kalinets is a member of a consultative council of the Lviv region executive committee in charge of humanitarian policy, the chairperson of a Round Table of heads of public educational and cultural organizations, a research assistant in the Lviv State University, Scientific Research Institute of Literature. Her area of academic interest is the history of the Slavs, in particular, of Ukraine between the fourth and twelfth centuries.

[1]  “Towarystvo Leva” [“The Lion Society”],  was a youth organization, created in 1988, whose main objective was to reconstruct the history and culture of Lviv. The lion is the city’s symbol and the main element on the city coat of arms.

[2]  Yevshan-zillya is a Steppe plant with red or purple flowers. It appears in a lot of 19th and 20th century literature and has become a symbol of Ukrainian identity and / or solidarity.  It was the title chosen for the samizdat journal mentioned above. 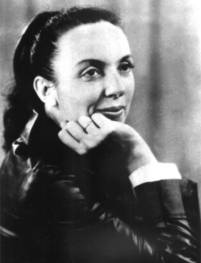