Les Tanyuk was born into a family of teachers. His early years were spent with his parents in a concentration camp in Germany. After returning to Ukraine, the family were not allowed to live in Kyiv, and moved to the town of Lutsk in the Volyn region where his father was from. There Tanyuk finished school, worked for a while casting moulds in a foundry before becoming a student of the cultural vocational college and actor in the regional theatre. He gained his higher education at the Kyiv Institute of Theatrical Arts named after I. Karpenko-Kary, graduating as “theatre and film director” (from the course run by Maryan Krushelnytsky).

From 1959 – 1960 Tanyuk was one of the founders of the “Klub tvorchoyi molodi” [“Club for Creative Young People” (CCY)] in Kyiv, the main (unofficial) organization of Ukrainian Shestydesyatnyky [Sixties activists].  Tanyuk was elected first head of the Club.  The CCY had sections focusing on literature, theatre, cinema, fine arts, architecture, music, as well as a jazz group and others. There were as around 900 people active in CCY activities, with up to 2 thousand, counting regional sections.  Those involved included Ivan SVITLYCHNY, Alla HORSKA, Ivan DRACH, Yevhen SVERSTYUK, Yury BADZIO, Vasyl STUS, Vasyl SYMONENKO, Viacheslav CHORNOVIL, Viktor Zaretsky, Volodymyr Zahoriyko, , Lyudmila Semykina, Iryna Zhylenko, Borys Necherda, Serhiy Paradzhanov, Leonid Cherevatenko, Leonid Hrabovsky, Serhiy Bilokin, Nelli Korniyenko, and others.  As well as members of the creative intelligentsia, an active role in the activities of the Club was also played by scientists, young research institute assistants, engineers, teachers, among the most prominent being the cyberneticist Oleksandr Klushyn, the mathematician Leonid PLYUSHCH, the scientist Henrykh Dvorko.  Evenings in memory of Taras Shevchenko, Ivan Franko, Lesya Ukrainka, Les Kurbas, Mykola Kulish attracted a lot of people, as did events of contemporary poetry – that of Vasyl SYMONENKO, Lina KOSTENKO, Mykola Vinhranovsky and others.  The CCY regularly organized meetings where papers were read about the work of those who had been repressed – the writers M. Khvylyovy, Hryhory Kosynka, Mykola Kulish, the artists Anatoly Petrytsky, V. Meller, M. Boichuk,  figures of the “Renaissance gunned down”[1].
It very soon became clear that the activity of the CCY went beyond official boundaries, that the exhibitions, debates, trips aimed at learning about and recording architectural and historical monuments of Ukraine, poetry evenings, theatre performances (Berthold Brecht and Mykola Kulish in Tanyuk’s production), films (for example Serhiy Paradzhanov’s ‘Tini zabutykh predkiv’ [‘Shadows of forgotten ancestors’] and „Krynytsa dlya sprahlykh” [“A Well for the thirsty”] by Y. Ilyenko and I. DRACH, and articles and books published were in an openly anti-totalitarian and protesting spirit. The activity of the CCY was supported by Maksim Rylsky, P. Tychyna, M. Bazhan, M. Stelmakh, Hryhory KOCHUR, leading Ukrainian artists and composers, with this unity spanning different generations intensifying the tension around the CCY.

In 1962 the CCY submitted to the authorities a list of churches and other historical monuments which were facing destruction with a demand that the authorities take the appropriate measures. In that same year a group of members of the CCY, led by Tanyuk, travelled to Solovky and collected material there about the repression of members of the Ukrainian intelligentsia. In autumn 1962, a committee was organized by the CCY, with Tanyuk, A. HORSKA and V. SYMONENKO, to check information about mass burials of victims of the Stalin Terror in the district of Brovariv (now Bykivnya, near Kyiv). The first thing that they saw when they arrived at the place was children playing football with the skull of a child with a clear bullet hole in it. After asking questions of local residents, a Memorandum was drawn up and sent to the authorities demanding an investigation into the events of the 1930s connected with executions at Bykivna and the burial of victims of repression on the slopes near the October Palace of Culture, in the Lukyanivsk cemetery.

It was perhaps with this that the CCY finally overstepped the limits of what would be permitted, and pressure began to be exerted on the Club. Tanyuk was removed from the leadership of the CCY, however, although V. Zaretsky was officially elected head, Tanyuk effectively continued as leader until it was finally closed in 1964.

During those years Tanyuk travelled a lot around Ukraine. He produced drama productions in Odessa, Lviv, Kyiv and Kharkiv  (the plays being later banned and removed from the repertoire). In many places, on Tanyuk’s initiative, clubs appeared which were similar to that in Kyiv.

In 1965, under pressure from the authorities, Tanyuk was forced to leave for Moscow where he worked until 1986 in the Central Drama Theatre, in MKhAT (the Moscow Arts Theatre), the Stanislavsky Theatre, the Mayakovsky Theatre, working with the directors Okhlopkov, Zavadsky and Yefremov.  His works include over 50 drama productions and several television films. He has also written books about Krushelnytsky and Kurbas, as well as a collection of poems under the title “Spovid” [“Confession”].  He has also translated works of Shakespeare, Appollinaire, Heine, Tahor, Pirandello, Brecht, a monograph of Gordon Cregg, novels by Joyce Carey and J. Kessel, as well as plays by playwrights of the countries of the former Soviet Union, Poland, Bulgaria and Rumania.

In 1986, a month after the Chernobyl disaster, Tanyuk returned to Ukraine to take up the position of Chief Director of the Kyiv Youth Theatre.  He was however, following some successful productions and a series of protest theatre evenings, dismissed at the prompting of the Kyiv City Committee of the Communist Party of Ukraine for “unsuitability for the position”, without the right to work in theatres.

He is a member of three creative unions – Theatre, Cinematographic and the Union of Theatre Figures of Ukraine, the last of which he has headed since 1992.

In March 1990 he was elected State Deputy of the Verkhovna Rada of Ukraine and was a member of the Presidium of the Verkhovna Rada and the chairperson of the Committee on Cultural Issues. He was one of the initiators of the prohibition of the Communist party of Ukraine in 1991. He was the chairperson of the People’s Council (the democratic opposition in the Verkhovna Rada) after I. Yukhnovsky (1992-1993). From 1988-89 he was the Ukrainian representative on the working group of the All-Union Association “Memorial” in Moscow and one of the organizers of the Ukrainian “Memorial” named after V. Stus, and from 1993 the chairperson of the latter.  In 1995 he headed the all-Ukrainian Committee on the preparation of the trial of the Communist party of Ukraine, called “Nuremburg-2”, and in 1996 he became the coordinator of the group of Deputies under this name in the Verkhovna Rada.
Tanyuk has been a State Deputy in the last three sessions of the Verkhovna Rada. He is a member of the Presidium of the Central Board of Narodny Rukh Ukrainy [The Popular Movement of Ukraine] (Rukh), a member of the National Committee of Ukraine on UNESCO matters, an honoured representative of the arts of Ukraine, an honorary professor of the Kharkiv Institute of Culture, and is in charge of the courses for actors and producers at the Kyiv theatre institute named after I. Karpenko-Kary.

He has published more than 600 works on art, theatre, literature, sociology and politics. He wrote the script for the film “Holod-33” [“Famine-33”] (about the Famine of 1932-1933] and has produced 12 documentaries for television on cultural figures who were victims of the Terror “Rostrilyane vidrodzhennya” [“Executed Renaissance”]

[1]  The 1920s and beginning of the 1930s were an exciting time in Ukraine, with experimentation and intense activity in all fields, including the arts. This was brutally crushed in the 1930s, with a huge number of great figures in the arts executed. The organization “Memorial” has a program called “Розстріляне відродження“ [“Rozstrilyane vidrodzhennya” – literally, the executed Renaissance]. More can be found on Memorial’s website: memorial.org.ua  (translator’s note) 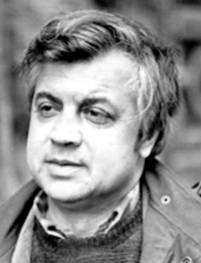