From a village family, Yakubivsky’s grandfather Herasim and great-grandfather Vitsko had everywhere taken away from them under the campaign against ‘kulaks’ (more affluent peasants), and were driven from their homes. His father, 22 years old and recently married, was mobilized into a "labour army" (compulsory work brigade, living in barracks) where, for demonstrating protest, he was convicted and sent to Siberia. Returning to Verbivka, he worked as a carpenter, then went through the war. On his return, he built a home, then fell ill and died at the age of 45, leaving his wife Domka with four children. Mykhailo was then 3 years old, however he still remembers how he helped his father in his carpentry. Yakubivsky’s mother worked for 40 years on a collective farm. She is like a classic image of Ukraine, knowing countless songs she learned from her mother.

In the fifth grade, on his schoolboy’s map, Mykhailo “separated” Ukraine from the USSR. His elder brother, Vitaly, read him with commentaries the poetry of Taras Shevchenko and V. SYMONENKO. His final work for the end of the eighth grade, an essay by Yakubivsky on Shevchenko, as well as his negative reaction to the occupation of Czechoslovakia, and his reading of the novel “Sobor” [“Cathedral”] by O. Honchar, were all deemed by the school psychiatrist and another psychiatrist to be actions dangerous for the authorities. "Let’s have the Professor examine you!" Without his relatives being informed, the 15-year-old top student was tricked and sent in September 1968 to the Kyiv Psychiatric Hospital. (“Glevakh”). There the psychiatrist “treating” him diagnosed him, on the basis of his thinking on the subject of “independent Ukraine” and his assertion that Lenin had crushed Ukrainian independence, as having “a simple form of schizophrenia”. The psychiatrist however insured himself by adding: “He has the right to enter higher educational institutions”.

In 1970 his essays at the entrance exam for Kyiv University with their mention of “Sobor” were judged to be ideologically unbalanced. He worked for a year as a literary assistant for the district newspaper “Prapor kommunizmu” [“Banner of Communism”] in the city of Chudnovo. The next year, despite holding the leaving certificate of a top student, references from the editorial offices of newspapers and a pile of cuttings with his own publications, the selection commission, having seen his diagnosis, showed him the door. It proved necessary to falsify his medical certificate, after which he studied successfully for three years in the faculty of language and literature, studying as well as his own language, Greek also. From his early years he wrote poetry.

In March 1974 on the basis of a separate comment of the Kyiv Regional Court in the case involving Y. PRONYUK, V. LISOVY and V. OVSIYENKO, at the faculty there was a Komsomol meeting which condemned Yakubivsky for his notes on the work of I. DZIUBA “Internationalism or Russification?” and for his not renouncing his positive attitude to one of the arrested men, V. OVSIYENKO, whom he had shared a room with in the hostel for a year. The Komsomol character reference for Yakubivsky says that he had "forgotten vigilance, demonstrated political immaturity in his encounters with representatives of the nationalist organization and lack of courage in keeping silent about everything". The Professor of the faculty, Margarita Karpenko, said: "You should have informed us about Vasyl, then you would have been laughing ... Now we have to take measures to clean our ranks!", while another Professor, Valentyna Povazhna stated "To share a room and not know what is happening inside the briefcase of your roommate - that, excuse me, is simply not the behaviour of a good Komsomol member!". Effectively, therefore, for not denouncing his roommate, Yakubivsky was thrown out of the Komsomol, and then on 30 March 1974, from the institute.

Yakubivsky tried to find work as a journalist in Zhytomyr, however two weeks after being taken on he was sacked as not politically sound. He found a job as a loader at a flax combine. The KGB wanted him to report to them about the mood among workers. He refused, and on the same day, 13 June 1974, they tied his hands behind his back and took him to a TDC (Temporary Detention Centre), and then to the Zhytomyr psychiatric clinic. He was prescribed strong neuroleptic (anti-psychotic) drugs (haloperidol, sulfazin, triftazin, aminazin and others). He was kept tied to his bed. The hospital assistants nicknamed him "Independent Ukraine’. It was three months before, on 5 September 1974, he was discharged, having received injections with unknown medicines for three months that it then took a year to get over. It was difficult for him to even speak. The KGB officer, Boris Zavalny, when asked why they had so tormented him replied: "It was all done out of humane considerations". Another said: "You can be thankful you’re still alive ... Otherwise we can do it another way, and you’ll be fit for no more than watching the sheep graze.

When soon after this Yakubivsky arrived in Kyiv in search of defence, he was flung into the Kyiv "Pavlivka’ (psychiatric clinic) where a "humane" doctor, Danylo Brandus confirmed the denunciation of informers that Yakubivsky had wandered naked around the hostel. He was kept with those who needed restraining.
None of the former Shestydesyatnyky [Sixties activists] having remained at liberty, but terrified, whom Yakubivsky turned to, dared help him.

In 1976 at the demand of the Head of Kyiv University, Horshkov, Yakubivsky was forced to write a "letter of repentance", something along the lines: "Please accept me into the study by correspondence department of the language and literature faculty, I won’t involve myself in nationalism anymore". He found a job as freelance correspondent of the newspaper "Kyivska pravda" [“Kyiv Truth”], however was incapable of performing the role of a lying Soviet journalist. In 1977 he accepted the pitiful salary of a research worker in the Museum of folk architecture and everyday life. The old huts, churches and windmills, conversations with visitors helped to get through the Brezhnev age of obscurantism. Yet even from there he was dismissed in 1982 for trying to save priceless exhibits which were disintegrating.

25 years later, on 19 August 1993, a specialist commission of the Association of Psychiatrists of Ukraine (S. GLUZMAN, V. Chernyavsky, N. Vergun) declared Yakubivsky to be mentally fit: “On the basis of studies of the medical documents and the results of the present examinations, the experts have come to the conclusion that Ukrainian citizen, Mykhailo Mykhailovych during the period from 1968 to 1975 did not suffer from a chronic psychological illness (schizophrenia) and at the present time shows no signs of psychological illness”

In connection with a range of publications in the press, talks by radio and television about Soviet punitive psychiatry, Yakubivsky turned to the Prosecutor with a demand to be rehabilitated. However the present functionaries of the Prosecutor’s office do not consider Yakubivsky to have been a victim of repression (… your being treated in psychiatric clinics did not constitute forced measures of a medical nature…”). In accordance with the Law of Ukraine on rehabilitation of victims of repression from 17 April 1991, only those who were tried and convicted are considered victims.

Yakubivsky worked as a journalist, was unemployed. He is presently personal adviser to a State Deputy. In 1980 he married. He and his wife, Lyudmilla, have two children, Yaroslava born in 1982 and Taras, born in 1986.

Mykola Khriyenko How to make a diagnosis of schizophrenia during Brezhnev’s time. // Molod Ukrainy .— 1993.— 10 December 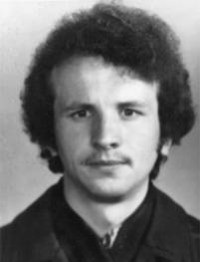