Commander of a military unit, he spent more than 32 years in Soviet prisons and labour camps

Symchych trained as a construction technician and worked as a metal worker and lathe operator.

From childhood he dreamed of becoming a “Cossack and driving all aliens from Ukraine”.  In 1941 he saw with his own eyes victims who had been tortured by the retreating “red Russians”.  In the same year he joined a youth network of the Organization of Ukrainian Nationalists (OUN) in the village of Vyzhny Bereziv.  On 20 October 1943 he joined the Ukrainian Resistance Army (UPA), and fought in their ranks until 1948.  During one of the battles Symchych and his division crushed a regiment for meting out retribution, which, under the command of General-Major S. Dergachev was on its way to carry out a punitive operation in the district around the village of Kosmach. Symchych calls this battle “his crowning achievement in the fight against Muscovite imperialists”.

On 13 April 1949 Symchych was sentenced by the Military Tribunal of the forces of the Ministry of Internal Affairs (MIA) of the Stanislavsk (now Ivano-Frankivsk) region under Articles 54-1 “а” (“Treason against the homeland”) and 54-11 (“Involvement in a counter-revolutionary organization”) to 25 years labour camp.

He served his sentence in Berlag, in the Magadan region.  He found himself in a camp where the camp management worked with the help of a band of thieves. He was once forced to defend himself to enter into a fight with the latter, with friends coming to his assistance. The officer who had provoked the fight launched a case against their “nationalist grouping”.  All 8 men were sentenced by the Khabarovsk Regional Court on 7 December 1953 under Article 59-3 of the Criminal Code of the RSFSR to an extra 10 years labour camp.

In 1956 a Commission of the Supreme Soviet of the USSR reduced his sentence to 10 years. He was released in 1963.  From 1963 – 1968 he lived in Zaporizhye, repairing rolling mills and blast-furnaces for local factories. However on 30 January 1968 he was again arrested on the basis of so-called “newly uncovered circumstances” (relating in fact to his activities in OUN). . In December 1969 the Presidium of the Supreme Soviet of the USSR revoked the 1956 Ruling, and on 20 January 1970 the Supreme Court of the USSR ruled that Symchych be sent back to complete the sentence imposed in 1953 (with the end of this sentence being 30 January 1982). He served his sentence first in Dubravlag (the Mordovian political labour camps), and then from 1979 in the Perm camp for criminals in connection with the end of his sentence based on the 1949 conviction.

In 1976 Symchych addressed an appeal to the Presidium of the Supreme Soviet of the USSR calling for his sentence of 1953 to be revoked as incorrect given that the other people sentenced on the same charges had already been rehabilitated. His letter was published abroad. In the same year he made an appeal to the UN Human Rights Committee.

On 14 July 1978 the camp administration summoned Symchych in connection with his appeal stating that at the end of 1977 he had already served 25 years. The supervisory commission refused to send his case on for further review as he had “not made any movements towards reforming himself”.

In December 1978 S. Kovalyov, S. GLUZMAN, Y. PRONYUK and Y. SVERSTYUK, all prisoners of the Perm political labour camps issued  “An appeal on behalf of Symchych”.

In 1979 Symchych sent an appeal to the MIA and the KGB asking to either be moved back to Prison No. 35 in the Perm region, or to the Zaporizhye region (his family lived in Zaporizhye), since with his state of health the conditions in the new labour camp were too harsh and it was too difficult for his wife to visit him. He wrote in his appeal: “Over 27 years of captivity my health has totally deteriorated. In the 8 years in Kolyma scurvy has destroyed all my teeth”.  He rejected the demands that he write his letters in Russian, answering that he didn’t and would not write in Russian. After a three-hour talk with Symchych, an officer of the Perm Penal Department told him: “I see that in 27 years they haven’t changed your way of thinking, and I’m hardly going to try now. Keep your views”.

In November 1980 the camp authorities discovered slides on religious subjects among Symchych’s things. On 16 December he was put in the punishment isolation cell for 15 days “for non-fulfilment of the plan”.  In connection with this, V. MARCHENKO, then serving a period of exile, sent a telegram to the Prosecutor General of the Ukrainian SSR demanding that the head of the detention institution No. 310/88 of the Zaporizhye region, Grygorenko, be called to answer.  It said: “Symchych needs medical help. For over two months the family has had no letters from him, his wife went to the camp twice and asked to see her husband (doubting that he was in this camp)”.  Grygorenko’s reply was “This is not a menagerie. I don’t know why he doesn’t want to write to you”.   Around 1980 several letter appeals from Symchych, edited and smuggled out by Valery MARCHENKO were published in West German, Canadian and US journals.

On 6 June 1981, Symchych’s wife, Raisa Moroz, directed an appeal to the Prosecutor General of the USSR in which she stated that in the corrective labour camp YY-310/88 of the Zaporizhye region where her husband had been sent from the political camp, the camp staff had been summoned and told to give evidence about anti-Soviet opinions expressed by Symchych. She called for them to stop concocting a new case against Symchych and to give him a chance to be freed at the end of his sentence in 1982.

"My husband is old and frail, he can do no harm to the regime and would be incapable of harming the system merely through physical weakness. I am therefore turning to you with the request to intervene, to stop the fabrication of a case and to allow my husband to be free after 30 years in captivity, when this term ends on 30 October 1982 and to live with his family”. This letter was published in the journal “Vyzvolny shlyakh” [“Path of Liberation”], book 5, May 1982.

On 22 January 1982 a secret search was made of Raisa Moroz’s flat while she was out. For an hour and a half unidentified individuals 22.01.82 carried out some kind of work in the flat. The police who had been called by neighbours refused to take any measures.

Before the very end of his term Symchych was arrested and in 1982 was sentenced in the camp under Article 187-1 of the Criminal Code of the UkrSSR (“Dissemination of patently false statements defaming the Soviet political and social system”) to 2 and a half years labour camp.

Symchych was released in 1985. He had spent 32 years, 6 months and 3 days in captivity.  He was still held under surveillance for another year.

He is now a pensioner and lives in the city of Kolomiya in the Ivano-Frankivsk region. 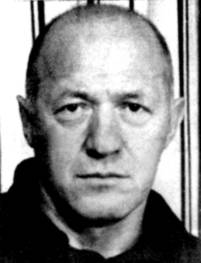 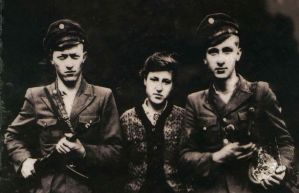 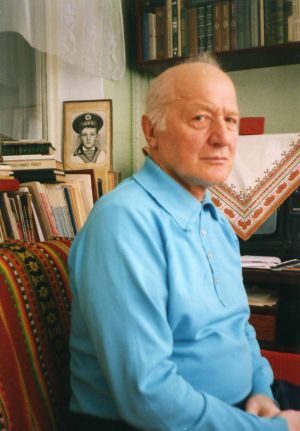