Senyk was born into a family of ’sichovi striltsi’ (military units fighting for Ukrainian independence in Halychyna (Western Ukraine) from 1912 through 1919 against both Poland and Russia).  Her world view was shaped in childhood under the influence of her parents, private schools, a private women’s lyceum of the Ukrainian Pedagogical Association), and then by the Organization of Ukrainian Nationalists (OUN), which she became a full member of in 1941 (having been in the youth network of the OUN from 1939). She served as a messenger for the Regional Organization. A not insignificant role, in her own words, was to be played by her religious awareness, her work in the Metropolitan’s Office, her close cooperation with Metropolitan Andriy Sheptytsky.

From 1944 – 45 she studied at the Lviv University in the Faculty of Foreign Languages (English Language and Literature).

Due to her involvement in the national liberation movement, Senyk was arrested on 12 December 1945 and accused of “Treason against the homeland” (Article 54-1 “a”) and “involvement in a counter-revolutionary organization” (54-11) of the Criminal Code of the Ukrainian SSR. She was sentenced in March 1946 by a military tribunal of the Carpathian military district forces of the NKVD to 10 years labour camp and life-long exile.  She served the camp sentence in the camps of the Irkutsk region (Zaozerlag, Angarlag).

Senyk spent 13 years in exile in the city of Anzherosudzhensk, in the Kemerovsk region. From 1955 she was seriously ill.

She graduated from the medical college in Novokuznetsk.  In September 1968 she was released on condition that she did not return to Lviv. She settled in Ivano-Frankivsk where she became friendly with Shestydesyatnyky [Sixties activists], and worked as a nurse.

Knowing from her own experience what prison, labour camp and exile mean, Senyk was ready to defend all those who had been languishing in captivity for many long years and those who had again ended up behind bars (V. MOROZ, S. KARAVANSKY and others). She wrote appeals and letters of protest on their behalf to the Prosecutor’s office and to the KGB. In December 1969, she was one of 16 former political prisoners who signed the letter “Yet again “cell” trials?” against the practice of holding “trials” (imposing new charges, and sentences) in camps and prisons.

On 17 November 1972 she was arrested and charged with engaging in “anti-Soviet agitation and propaganda” under Article 62 § 2 of the Criminal Code of the Ukrainian SSR.  The charges related to material removed during searches, including “Novaya literaturnaya volna v Ukrainye” [“New literary wave in Ukraine”] by Emanuel Rice, Anna Akhmatova’s “Poema bez geroya” [“(Epic) Poem without a hero”], an anthology of samizdat poetry (L. KOSTENKO, V. SYMONENKO, Vinhranovsky and others), as well as two collections of Senyk’s own poetry, found during a search of V. CHORNOVIL, which were deemed on examination to be anti-Soviet.

On 26 January 1973 the Ivano-Frankivsk Regional Court found Senyk to be a particularly dangerous repeat offender, however bearing in mind her level of health (in 1958 she had undergone a serious operation), sentenced her to 6 years harsh regime labour camp and 5 years exile.

She served her sentence in the women’s unit of the Mordovian political labour camps, No. ZhKh-385/3 in the settlement of Barashevo, Tengushevsk district. Senyk took part in hunger strikes to mark the Day of Soviet Political Prisoners, signed letters and appeals to the world community trying to draw attention to the “flagrant violations of basic human rights” in the USSR.  In 1977 she signed an appeal from Ukrainian political prisoners in support of V. ROMANYUK.  In the document of the Initiative Group in Defence of the Rights of the Disabled № 4 from 20 October 1978, addressed to the Presidium of the Supreme Soviet of the USSR, the International Red Cross and the UN Human Rights Committee considered the question of the position of disabled people in places of deprivation of liberty, and presented a list. Senyk’s name was listed as one of those whose rights needed to be defended.

On 15 November 1978, after 6 years labour camp, Senyk was sent to serve her five-year exile period. Before the move, S. SHABATURA made efforts to have Senyk transferred by ordinary transport given her state of health (after her first sentence and exile she had second group disability status).  Senyk’s brother sought permission for her to be sent into exile to him, in the Kemerovsk region, where their mother also lived.  Neither of the two appeals was heeded. After a month’s convoyed travelling, Senyk was brought to the city of Ush-Tobe in the Talda-Kurganska region of Kazakhstan.  Senyk became seriously ill during these transport stages. In Tselinograd she was placed in the medical unit, and several times they had to call a city ambulance. On being released at her place of exile, Senyk was not given any documents, but was however placed immediately under surveillance. She remained gravely ill.  She was not permitted to work according to her profession, and found work only as a cleaner in a hotel.

From 1979 Senyk was a member of the Ukrainian Helsinki Group (UHG). On 30 October a document was published with the title  “Lamentatsiya” [“Lamentation”], where three women members of UHG, O. MESHKO, N. STROKATA and Senyk, addressed an appeal to the world community and to all people of good will, informing them of the numerous instances testifying to the “escalation of State terror and defamation directed at the Ukrainian human rights movement in Ukraine”.  In autumn of the same year, Senyk signed the UHG Memorandum stating that the Group was alive and functioning in spite of the repressions perpetrated against its members.

In 1977 a collection of poems written by women political prisoners was published in the USA under the title “Nezdolany dukh” [“Unsubdued spirit”] which included poems by Senyk.  In the USA N. SVITLYCHNA also put out a book with embroidery patterns designed by Senyk.

Irina Senyk was fully rehabilitated in 1991. 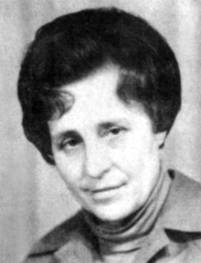 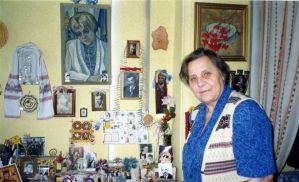