Ruban’s father was a fighter pilot.  For having been captured by the Nazis, he became the victim of repression by the Soviets and never returned. Ruban’s step-father was also a military man, while his mother worked as a vendor.

In 1959 Ruban was sentenced under Article 138 of the Criminal Code of the Ukrainian SSR to 8 years deprivation of liberty on a charge of attempting to rob a saving bank.  The original charge had added that this was in order to get money to help the national liberation movement, but this was later removed.

In 1968 Ruban was sentenced under Article 62 § 1 (“anti-Soviet agitation and propaganda”) and Article 222 of the Criminal Code of the Ukrainian SSR (“unlawful possession of weapons”) to 5 years labour camp. He was charged with “bourgeois nationalism” for supporting Ukrainian independence.

He served his sentence in the Mordovian political labour camps where he took part in smuggling to the outside world the “Diary” of E. Kuznetsov. During this period, Ruban became a skilled wood carver using the method of wood incrustations. The camp administration encouraged him in this, and he even received orders for his work.

On his release in 1973, Ruban was sent to the city of Pryluky in the Chernihiv region where his wife had been sent to work after graduating from her institute. Ruban found work as a wood carver at the Pryluky furniture factory.

With the permission of the Artists’ Fund of the Ukrainian SSR, Ruban submitted work which he produced in his home studio to an artists’ salon and shop in Kyiv. His work was successful, and on several occasions he received orders from the Council of Ministers of the UkrSSR, from the Regional Committee of the Ukrainian Communist Party, and from the Ministry of Foreign Trade. In 1974, his work “Shakhova knyha” [“Chess book”] received the second prize for the Republic Award.

The “Ruban case” of 1976 was launched after he prepared a gift to the American nation in honour of the 200-year anniversary of the USA. The gift was a wooden book, on the cover of which was engraved the Statute of Liberty with the words “200 years” (Ruban had worked on this for 8 months). Unidentified individuals broke into his home studio and stole the book. In the Prosecutor’s office, Ruban was advised “to forget about it”. “The traces lead to places where we don’t have the authority to carry out a search. There is no law that would give you the right to make such a gift, however there’s no law either which prohibits you from doing it”.  It was easier to simply get rid of the book.

On 13 October 1976 Ruban was arrested, and on 29 December the Pryluky People’s Court considered his case and the charges under Article 81 § 3 (“theft of State property”) and Article 150 (“private business activities”) of the Criminal Code of the Ukrainian SSR.  Ruban was accused of having submitted 73 souvenirs to the artists’ salon “prepared without registration at the business” and also of having stolen materials from the factory.

Andrei Sakharov considered that the Ruban case was pure revenge on the part of the KGB for Ruban’s involvement in smuggling E. Kuznetsov’s “Diary” out of the camp.  Sakharov sent a letter to President Carter with a request to intervene in the case. L. LUKYANENKO also publicly defended Ruban, writing the article “Zupynyty kryvosuddya!” [“Stop the parody of justice!”] for the journal “Narodna tvorchist ta etnohrafiya”.

The court sentenced Ruban to 8 years deprivation of liberty and 5 years exile.

After the court hearing, Ruban was not allowed to read the protocol of the proceedings, as a result of which his words which had been distorted were used as cause for new charges at the next court. For example, he had said in his final words that he was being tried because he “had fought for the secession of Ukraine from the USSR”, whereas the protocol claimed that he had said “I fought and will fight for the secession of Ukraine from the USSR”.  Ruban lodged an appeal, the sentence was revoked and the case was sent for a new investigation. 10 days later, the Deputy Prosecutor of the Ukrainian SSR spoke of the need to “look into bringing charges against Ruban under Article 187-1 of the Criminal Code of the UkrSSR (“Dissemination of patently false statements defaming the Soviet political and social system”).  KGB also became involved in the case.

From 18 – 29 April 1977 the Chernihiv Regional Court considered Ruban’s case and the charges against him under the original two articles and also under Article 187-1 of the Criminal Code of the UkrSSR.  The charges related to notes which Ruban had made in the Mordovian political labour camps  (8 notebooks), letters to his wife from prison (which had been subjected to camp censorship), verbal opinions expressed as well as the things said and misrepresented at the previous trial.

The court sentenced Ruban to 6 years special regime labour camp, 3 years exile, the repayment of “illegal profits” and confiscation of property (a home still not built: Ruban’s family with three children had been living for three years in a cattle-shed while the house was being built). Ruban was also defined as a particularly dangerous repeat offender. The charge of “stealing materials” (Article 81) was rejected by the court.

Ruban served his sentence in camp UL-314/60 in the Luhansk region. He categorically rejected the many suggestions by KGB officers to distance himself from the nationals who were using his name in their anti-Soviet campaigning.

From 1985 Ruban was a member of the Ukrainian Helsinki Group (UHG).  Following his release, he applied to travel to the USA for an operation and for treatment for his crippled son.  This led to his again, on 9 July 1985 being arrested and sentenced on 29 November by the Chernihiv Regional Court under Article 62 § 2 of the Criminal Code to 9 years special regime labour camp and 4 years exile, with the classification as a “particularly dangerous repeat offender”. At the court hearing he defended himself and declared a hunger strike demanding that his paralysed son be allowed to leave the USSR for treatment.

He served his sentence in the special regime camp VS-389/36-1 (Kutchino, Chusovoi district, one of the Perm political labour camps). In 1987 he asserted his right to political prisoner status for which he was on several occasions thrown into the punishment isolation unit and cells. In December 1987 he was transferred to camp VS-389/35.
On 31 January 1988 Ruban’s wife, Lidya, and his son, Marko, arrived in the USA.

In January 1996 at the II Conference of the Organization of Ukrainian Nationalists in Ukraine (OUNiU) he was elected deputy to the Head of the Main Management Board.  He is a businessman. Using money collected from members of the Ukrainian Diaspora, he has sent computers, fax machines and other office equipment to Ukraine. 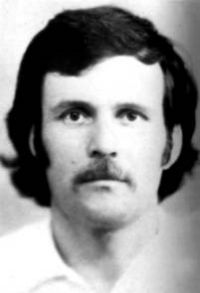