Melnyk was born into a peasant family. After graduating in 1967 from the History Faculty of Kyiv University, he worked as a school teacher. He began his PhD studies at the Institute of History of the Ukrainian Academy of Sciences, however in 1972, twenty days before he was to have defended his PhD thesis he was thrown out of his course for having read his poems at the monument to Taras Shevchenko on 22 May, the anniversary of the reburial of Shevchenko’s body in Ukraine [the poet having died in exile in St. Petersburg].  In 1972 Melnyk issued a letter of protest against the “purge” of the Union of Writers of Ukraine during the second wave of arrests of members of the Ukrainian intelligentsia. In 1973 he was dismissed from his work as a teacher and expelled from the Party.  Living with his family in the city of Pohreby in the Brovarsky district of the Kyiv region, Melnyk was forced to work as a guard. He was actively involved in protest actions against the persecution of Ukrainian writers and human rights activists, and frequently turned to the press with protests against human rights violations.

On 14 July 1978, while visiting Kyiv, he was detained on the street in Darnytsa and searched. On 24 October of that year, the authorities attempted to charge him with intention to rob a shop.  KGB officers worked on Melnyk, promising to help him find work in his profession if he promised not to have any dealings with O. MESHKO.

From November 1978 Melnyk was member and correspondent for the Ukrainian Helsinki Group (UHG). Melnyk sent critical commentaries, outlines of his views on various issues, protests at the persecution of people for their independent views to various editorial boards of the official press, including texts connected with the new Constitution and with the ban on laying flowers and holding actions on 22 May to commemorate the reburial of Taras Shevchenko.  Several of his letters of protest, for example, those about the “Shevchenko” actions on 22 May were published in Ukrainian samizdat abroad.

On 16 February 1979 Melnyk sent a letter to the editorial boards of the newspapers “Radyanska Ukraina” [“Soviet Ukraine”] and “Molod Ukrainy” [“Youth of Ukraine”] with a call to intervene in the case of V. OVSIYENKO.  In it he writes: “... one cannot after all fail to be disturbed by the fact that in Ukraine virtually every person serving a sentence under article 62 of the Criminal Code of the Ukrainian SSR [“anti-Soviet agitation and propaganda”] after a short period (1-3 years) is forced either to emigrate or to once again end up in prison ...”

On 6-7 March 1979 searches were carried out in many homes, including that of Melnyk, in connection with the case of O. BERDNYK.  Melnyk’s entire creative and academic archive was removed, comprising 15 folders in all.  The fruits of all his literary and academic activity were lost.

The authorities were particularly annoyed by Melnyk’s persistence in commemorating the day of Taras Shevchenko’s reburial.

Melnyk wrote a farewell letter to his wife and, in order to protect her and his two daughters – Oksana, born in 1970, and Bohdana – 1975, from persecution, on the night of 9 March 1979 committed suicide. The frequent “conversations” that the KGB had held with his wife, threatening her with future problems if Melnyk did not cease his activities, were to play a not insignificant role in his making this terrible decision.

His funeral took place on 12 March, under the surveillance of KGB agents. Melnyk’s friends – P. Stokotelny and O. MESHKO were detained on the way to the funeral. P. Stokotelny was taken to the KGB where he was questioned about the case of O. BERDNYK, while O. MESHKO was simply held in the KGB headquarters until the end of the funeral without any pretext being found.

The only copy of Melnyk’s collection of poems “Kalendar pamyatnykh dat” [“Calendar of memorable dates”] left after the search was taken on 23 March 1979 from H. Mynyailo when the latter was detained on the street and searched.

Mykhailo Melnyk’s grave lies in the village of Pohreby.

Even after Melnyk’s death, the KGB did not leave his wife alone and on several occasions in April 1981 officers of the Kyiv Department of the KGB talked to her, warning her to keep away from “unreliable” contacts. 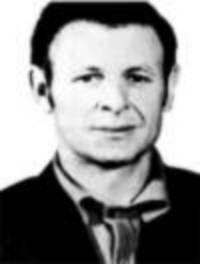