From an originally peasant family. Matviyuk’s grandfather suffered repression and lost everything in the campaign against “kulaks” (more affluent peasants). Of his 9 children, 7 died of starvation during the Holodomor [Famine] of 1932-33.

After finishing school in 1957, Matviyuk worked first for a year as a mechanic on the Makiyiv metallurgic factory, then for two years as a machine operator in his home village. From 1960-65 he studied at the Ukrainian Agricultural Academy in Kyiv, graduating as a mechanical engineer. After two years military service, from 1967 he taught in the Uman technical college for mechanisation of agriculture.  In 1971 he also graduated from the teachers’ training faculty of the agricultural academy.  He became part of the group of friends around the former political prisoner Nadiya SUROVTSOVA whose home was a gathering place for well-known dissidents from Kyiv, Lviv and Moscow. Young lecturers of the technical college, teachers’ training institute, school teachers and students under the guise of “restoring Leninist national policy” were attempting to protect national culture. They gave lectures on the history of the national liberation movement, held seminars and organized special evenings.  They succeeded in having the teaching in the technical college carried out in Ukrainian.  The works of M. Braichevsky “Vossoyedinyenye ili prisoyedinyenye? [Reunification or annexation?], I. DZIUBA “Internationalism or Russification?” and others were widely distributed.

Matviyuk’s hopes of beginning his PhD in Physical Metallurgy at the beginning of 1972 were to be dashed: the selection commission had been informed about his “leanings” – his home, as well as the “Surovtsova salon” was bugged by the KGB.  He was arrested on 13 July 1972. The first two weeks of the investigation were the most difficult with the KGB offering him release and his PhD studies in exchange for “disarming”, that is characterizing his activity “from the Party line”, placing all the blame on “the still kicking bourgeois nationalist” N. SUROVTSOVA.  Matviyuk withstood the temptation and refused to make any compromises. On 16 November 1972 he was sentenced by the Cherkasy Regional Court to 4 years harsh regime labour camp under Article 62 § 1 of the Criminal Code of the Ukrainian SSR (“anti-Soviet agitation and propaganda”). He was tried together with D. Chornomaz.

At the beginning of 1973 he was taken to one of the Mordovian political labour camps No. ZhKh-385/19 (Lesnoye). Matviyuk was on good terms with people from all nationalities, and took part in protest actions for which he was held in punishment cells.  In the labour camp his attempts to formalize his marriage with his wife Sophia were unsuccessful since the latter, daughter of an UPA (Ukrainian Resistance Army) fighter who fell in battle and mother who suffered repression, refused to “exert influence” on Matviyuk. As a result, visits were not allowed. In the penal zone he worked as a lathe adjustor, and working during a night shift, a lapse of concentration caused by his state of physical exhaustion led to an accident in which he lost the fingers of his left hand.

Matviyuk was released at the end of his sentence on 13 July 1976. The actual release took place in the following fashion: on 2 July Matviyuk was taken under guard and in handcuffs transported on a normal scheduled flight from Moscow to Kyiv, from where he was taken to the prison in the city of Cherkasy. On 12 July KGB officers talked to him, then on 13 July he was handed a coach ticket to the village where his mother lived. On his arrival there, he was informed that he would be under administrative surveillance for one year since he “had not made steps to reform during his period of captivity”.  He tried to find work as a teacher, but for half a year he was not even able to find a job as an engineer.  He would be offered a job, but then when they saw his employment record book with the entry about his political prisoner record, the offer would be withdrawn. He worked in the city of Oleksandriya in the Kirovohrad region in a design bureau, then in the village of Shubkiv in the Rivne region on a testing station, where he was dismissed “for lack of suitability for the position held” after reading a newspaper during a collective and compulsory session listening to a speech from Brezhnev.  He found work as a mechanic on a pig-breeding complex, in the factory garage, as a start and adjustment engineer, but the management were all unanimous in interpreting the interest expressed in Matviyuk by the KGB as being a signal to put pressure. He was not able to last in a single job more than a year.

On 17 December 1976 Matviyuk addressed a letter to the Head of the Oleksandriya District Executive Committee with regard to the fact that nobody was prepared to offer him a job once they found about his conviction, suggesting that he approach the KGB.  Matviyuk wrote that he “might possibly turn to the KGB, but only if it is openly written that the highest body of power is the KGB which is in charge of everything, including questions of employment.”  Matviyuk asked that he be allocated material assistance as somebody unemployed.

On 5 January 1977 Matviyuk wrote a letter to the newspaper “Pravda” about the fact that not only was he being stopped from working according to his qualifications but he was unable to find any work at all. He expressed the hope that the newspaper would not be indifferent to his fate given that he had read articles in the newspaper condemning bans on professions in the Federal Republic of Germany and the USA for “dissidents”.

Excerpts from these and other letters written by Matviyuk were included in the document of the Moscow Helsinki Group (MHG) № 46 from 20.04.78 “The Deprivation of the right to work and to a place to live on political grounds”.  From 1977-1978 he was interrogated several times.

Matviyuk renewed his public activities during the period of perestroika. He was one of the organizers and leaders of the society “Spadshchyna” [“Heritage”] in Khmelnytsky, as well as of regional organizations of the Ukrainian Language Society, Narodny Rukh Ukrainy [Popular Movement of Ukraine] (RUKH), the All-Ukrainian Association for Political Prisoners and Victims of Repression.

Matviyuk lives in the village of Pyrohivtsi in the Khmelnytsky district, and works as the head of the department for development of farms of the regional State administration.  His two sons and daughter are all students.

[Appeal to the Presidium of the Verkhovna Rada of the Ukrainian SSR requesting protection for him and his family from interference from the KGB in the Khmelnytsky region.  May 1978, the village of Ilyashivka, Starokonstantinovsky district] // Svoboda.– 1978.– 5 October. (// Ukrainian review.– 1979.– №2.– pp. 62-65; АС3445) 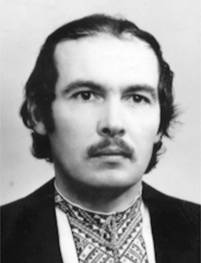