Lisova’s mother worked on a collective farm all her life, her father was a veterinary assistant.

During the famine of 1947, her elder sisters, while were still under age, received 5-year sentences, together with others from the villages, “for ears of grain” (the name amongst the population for the Decree of the Central Executive Committee and the Council of People’s Commissars of the USSR of 7 August 1932 which imposed harsh punishment for “theft of socialist property”, in particular for gathering ears of grain from collective farm compressed fields.  The sisters served two and a half years of the sentence.

In 1954 Lisova finished school, and from 1955 to 1961 studied at the external department of the Language and Literature Faculty of Kyiv University, working both at a factory and in a school. After graduating from university she worked as a laboratory assistant in the Ukrainian Scientific Research Institute of Pedagogy (USRIP) and taught Ukrainian Language and Literature at an evening school, while also working on her thesis.

Her sense of Ukrainian self-identification, stemming from her life in the village with the remnants of traditions, the songs her mother sang, the poetry of Taras Shevchenko, the Church, which had been pushed deep into her subconscious by ideological violence, revived during her university years and developed in the 60s at literary evenings, in the choir “Zhaivoronok” [“Lark”] (founded by M. PLAKHOTNYUK), through contact with Y. SVERSTYUK, Roman Korohodsky, A. HORSKA, N. SVYTLYCHNA, Tamara Tsvelykh and others.  Her “social glasses” came off, in Lisova’s words, after reading the article of Ivan Franko “Shcho take postup?” [What is progress?”]  Lisova fully supported the views of her husband, V. LISOVY and took part in events run by the Shestydesyatnyky [Sixties activists].  In the Russian school where Lisova moved to in 1964 after her first dismissal from USRIP for having taken part in the laying of flowers at the monument to Taras Shevchenko on 22 May, she held literary evenings, inviting Shestydesyatnyky, in particular, Y. SVERSTYUK, and organized excursions around Kyiv for her students. Four active years of work ended with a conversation with the district and school administration and her leaving in 1969 “at her own request”.

Lisova also left her position as junior editor in the publishing company “Naukova dumka” [“Scientific thought”] in 1971 “at her own request” – after writing an “ideologically inconsistent” editorial conclusion to a book of articles to mark the anniversary of the poet, Lesya Ukrainka’s birth and a letter to the Committee on Printing with regard to the poor quality of a book of tales “Kozak Mamaryha” from the publishing company “Veselka”.

In reaction to the second wave of arrests of 1972 Lisova’s husband, L.V. LISOVY issued “An Open Letter to the Members of the Central Committee of the Communist Party of the USSR and to the Central Committee of the Ukrainian Communist Party” in support of the cultural figures well-known in Ukraine who had been arrested, and was himself arrested. Two weeks later Lisova gave birth to her second child, a son. She was left with two small children to look after. A year later she was dismissed from her job and found herself without any means to live on. Friends helped and for a year she worked at home, doing embroidery.

When her husband had served half of his sentence, Lisova began to write statements to Soviet and Foreign organizations in his defence. She sent requests for information to camps, to the KGB to find out where he was being held, his state of health, in particular, four letters to the Secretary of the French Communist Party, J. Marchet, to the International Human Rights Committee, and in March 1976, to Amnesty International (AI).  This intensified the pressure from the KGB on the family in “small” and “big” zones – including the children. At that time Lisova already knew the Moscow dissidents A. Tverdokhlebov, Y. Shykhanovych, Galina Salovaya, T. Khodorovych and others. She took part in a press-conference for foreign journalists in Moscow where she gave them information about the situation in Ukraine, spoke out in defence of V. LISOVY, Y. PRONYUK and M. KOTSYUBINSKA. Together with O. MESHKO, A. MARCHENKO, O. ANTONIV, R. RUDENKO and others she helped the families of political prisoners through the Solzhenitsyn Foundation to help political prisoners and their families.  In this connection she was summoned to the KGB for questionings, searches of her home were carried out and she was warned that she would be held responsible for her “anti-social behaviour”. An attack on her teenage daughter was simulated to appear as though it was an attempt at rape, and she was openly followed as a form of placing psychological pressure. They chased “the Letter” of V. LISOVY: the investigator, Karavanov, threatened that Lisova would answer for its publication even after her children had grown up. In connection with this the Ukrainian Helsinki Group (UHG) issued Memorandum No. 8 of 15 March 1977 in support of Lisova. Information about persecution was broadcast over Radio “Svoboda” [Radio “Liberty”]. It is possible that this was why the KGB allowed Lisova to work in a school but “not as a teacher”.

In 1980 Lisova arrived with her children arrived at her husband’s place of exile. Several hours before their arrival, V. LISOVY was arrested on a charge of parasitism.  At the trial of her husband, Lisova acted as his defending counsel.

From 1978 until she retired in 1990, Lisova worked in a school library and in an after-school group (for children whose parents were still at work).  Through various means (conversations, reading, their own theatre and museum, songs, contests, traditional festivals, journeys around Kyiv) she introduced the children to the world of their native culture, stimulating a sense of national self-awareness and social activity.

In June 1983 the family returned to Kyiv. Lisova continued to work in the school.

At the present time Lisova is involved in the work for Narodny Rukh Ukrainy [Popular Movement of Ukraine] (RUKH), she speaks at conferences, writes publicist articles, for example, about O. MESHKO, I. Brovko, I. SVYTLYCHNY, women participants in the resistance, reminiscences about the 1960s.

Vera Lisova. Natsionalni menshyny ta problemy ekstremizmu I fashizmu v Ukraini. [National Minorities and problems of extremism and facism in Ukraine].  Address from the Union of Ukrainian Women at an international conference on this issue on 27.04.95. // Zona, 1997, №10.— pp. 4-10.

V. Ovsiyenko (based on a text, material and the account of V. Lisova) 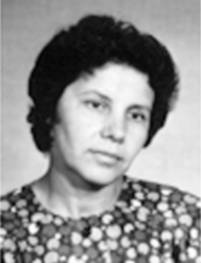