Krasivsky was born into a peasant family in which national traditions and national self-awareness were passed on from generation to generation. Members of his family took part in organizing groups of the association “Prosvita” [“Enlightenment”], reading rooms and church groups. Krasivsky’s father had fought in the Ukrainian sychevi streltsi (military units fighting for Ukrainian independence from 1918 – 1920), his elder brother, having become trapped in an ambush, shot himself rather than surrender to the Soviets. In 1945, knowing of a plan to exile them to a special settlement, the family fled, abandoning all their possessions. Krasivsky returned at that time from fighting in the underground resistance in order to recover from a head wound. In 1946 he received his school-leaving certificate and entered the Lviv Polytechnic, but did not have time to complete his studies. In 1947, the whole family, this time under convoy, was nonetheless exiled to Kazakhstan, however Krasivsky succeeded in escaping. In the Carpathian Mountains he fell into an ambush and was seriously wounded, but managed to escape, and lived in hiding in the mountains and in Lviv.  He was arrested and in March 1949 sentenced at a Special Meeting of the Special Commission of MIA to 5 years labour camp and lifelong exile. He served his camp sentence in the Arkhangelsk region, working on a timber logging site.

In 1953 Krasivsky was released under an amnesty and sent to Karaganda to his family. In 1956 he entered the external department of the Language and Literature Faculty of the Lviv University (specializing in Ukrainian Language and Literature).  He worked in a mine where twice he was trapped underground because of a cave-in and also survived an explosion which permanently damaged his health (he was given 2nd group disability status). His forced exile in a special settlement was also revoked.

In 1959, Krasivsky was arrested for “stirring up nationalist sentiments amongst Ukrainians” in Karaganda, but he managed to escape and flee to Ukraine.

Here, for more than 2 years he could not get registration to live with his wife and child, and was held under constant surveillance. He worked at that time in a library.

In 1962, having received permission from the Rector of Lviv University, Krasivsky was allowed to take his exams externally, and received a degree from the university.

At the end of August 1963, Dmytro KVETSKO  and B. Ravlyuk (both teachers of history) suggested that Krasivsky take part in the creation of the Ukrainian National Front (UNF).  Krasivsky prepared a kind of manifesto document entitled “Tactics of the Ukrainian National Front”.  It was also decided to produce a theoretical journal “Volya I Batkivshchyna” [“Freedom and the Motherland”]. The first issue of the journal came out in October 1964, and it is specifically this date which can be considered the beginning of the UNF’s activity. The first three issues of the journal were published in the attack of Krasivsky’s own home. UNF consisted of four organizations (2 in Lviv, 2 in Ivano-Frankivsk), as well as individual members in different parts of Ukraine (Rivne, Donetsk, Kirovohrad and others).  Krasivsky was in charge of coordinating the work of the Lviv groups. In all the UNF had more than 150 members who, for better secrecy, frequently did not know each other. As well as their own journal (there were 16 issues in all), UNF distributed literature of the OUN-UPA [Organization of Ukrainian Nationalists and Ukrainian Resistance Army] and samizdat. At that time Krasivsky wrote his novel “Baida”, and poetry which he made into three collections with the titles “Mesnyk” [“Avenger”], “Na spolokh” [“At the alarm”]  and “Lytavry” [“Kettle-drums”].

The “Memorandum of the Ukrainian National Front to the XXIII Congress of the Communist Party of the Soviet Union” sent in March 1966 to Party and government officials of the USSR and the Ukrainian SSR, as well as to central newspapers, caused a stir.  The document stated that the Communist Party only condemned the methods of Stalin’s national policy, and not its essence. The authors of the Memorandum, therefore, suggested that the Congress seriously reassess national issues within the USSR, satisfy the demands of the Ukrainian people and return them their usurped rights, in particular, give forcibly resettled Ukrainians the chance to return to their country, stop the arrests and persecution of the Ukrainian intelligentsia, introduce the Ukrainian language in all cultural, social, administrative and economic organizations and so forth.

In April 1966 the “Statement of the UNF” appeared with a protest against arrests, the attaching of the label of bourgeois nationalism and allegations that the national movement was all orchestrated by foreign intelligence services.  The “Statement” read: “the people themselves have begun this movement and their minimum demands are set out in the “Memorandum”. The next letter, prepared by D. KVETSKO and Krasivsky and entitled “To the highest government officials in Ukraine” was sent to the First Secretary of the Central Committee of the Communist Party of Ukraine, Pyotr Shelest, the Head of the Council of Ministers of the UkrSSR, Shcherbytsky and to the Head of the Presidium of the Verkhovna Rada of the UkrSSR, Korotchenko. It expressed opposition to the policy of forced Russification and called on the leadership of Ukraine to not only declare Ukraine’s sovereignty, but to stand up for it, demanding that Moscow put a stop to Russification and to the persecution of Ukrainians for their patriotism. The letter finished with the words: “Your inaction will be seen as betrayal of the interests of the Ukrainian people”.

In March 1967 the leading members of the UNF, including, on 24 March, Krasivsky, were arrested. The investigation was run by the Ivano-Frankivsk and Lviv departments of the KGB.  Thanks to the conspiratorial nature of the UNF, all those from Lviv, staunchly holding to the line that there was no organization, were tried individually, while Krasivsky, as founder of the UNF, was joined to the group case.

The main group (D. KVETSKO, Krasivsky himself, M. Dyak, Y. LESIV and V. Kulinin were tried by the Supreme Court of the Ukrainian SSR. They were charged under Article 64 (involvement in an anti-Soviet organization) и Article 56 (“Treason against the homeland”) of the Criminal Code of the UkrSSR. It should be noted that the qualification of the activity of those tried as “Treason” even by Soviet standards was illegal. On 27 November 1967, Krasivsky was sentenced to 12 years deprivation of liberty (5 years in prison, 7 years harsh regime labour camp) and 5 years exile.

While serving his sentence in the Vladimir prison (1968-1971) Krasivsky wrote the poems which make up the collection “Nevolnytski plachi” [“Captive Lament”], first published in London in 1984, and the epic poem “Triumph Satany” [“Triumph of Satan”].

In 1972, a new case was trumped up against Krasivsky under Article 70 § 2 of the Criminal Code of the RSFSR (“Anti-Soviet agitation and propaganda”).  He was charged on account of the collection of “anti-Soviet and nationalist” poems, protests to higher bodies of power, found in January 1972 during a search carried out in the prison, participation in collective protest hunger strikes. For refusing to give testimony Krasivsky was sent for a psychiatric assessment to the Serbsky Institute in Moscow, where on 4 May 1972 he was declared mentally unfit. On a directive from the Vladimir Regional Court, Krasivsky was sent to psychiatric hospitals first in Smolensk, and then in Lviv and Berezhany, in the Ternopil region where he remained until July 1978, when the Vladimir Regional Court reversed their decision about Krasivsky’s forced treatment. Following his release, Krasivsky lived in the city of Morshyn in the Lviv region with his colleague from the UNF, Mykhailo Melnyk, appointed his guardian.

Back in 1976 Krasivsky’s case had been taken up by “Amnesty International”.

In October 1979, Krasivsky became a member of the Ukrainian Helsinki Group (UHG). On 12 March 1980 a search was carried out of his home, following which he was arrested. The Vladimir Regional Court reversed its ruling declaring Krasivsky mentally unfit and sent him back to serve out his term according to the 1967 sentence – 8 months and 7 days in the camps and 5 years in exile. He served this part of his sentence in the Perm political labour camps. .On 17 November 1980 he was sent into exile to Lugova, a settlement in the Tyumen region.

In all Krasivsky spent 21 years in captivity.

In 1985 he returned to Ukraine. In 1987 he became the secretary of the Ukrainian Helsinki Union. In April 1990 he initiated the creation of the political association “State Independence for Ukraine” (SIU) which was based on nationalist ideology “under the banner of Stepan Bandera[1]”. Krasivsky was the founder of the political journal “Ukrainian Issues” which was published in the city of Striy in the Lviv region.

It was only after his death that it became known that in his last years Krasivsky had been the leader of the regional OUN (Bandera-supporting).

In the village of Vytvytsa a Krasivsky museum has been established and a monument to him erected. In 1996 the SIU published the collection of Krasivsky’s poems “Nevolnytski plachi” as a separate book. 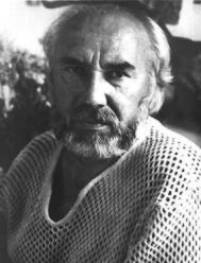