Honchar was born into a peasant family. His father was killed in the War.  From childhood, in Honchar’s own words at the age of 8 or 9, he understood the full injustice of the Soviet regime - the famine of 1946-47, the back-breaking work on collective farms for which people received no payment, elections that were not democratic and so forth.

In 1951, having completed seven grades at school, Honchar entered a technical college linked to the railway in Kyiv.  There he founded a youth organization which young people from the college, from his native village and neighbouring villages joined. In all, there were 36 people in the organization, which they first called the "Ukrainian Social-Communist Party of Narodniki", but then changed to the "Ukrainian Social-Democratic Party for renewal".  The aim of the organization was the fight for an improvement in the standard of living of the population, in particular, of collective farmers, for democratic elections, for Ukrainian independence within a just union (as Honchar defined it).  The members of the organization prepared the leaflets themselves, writing by hand in block letters calls to unite in the struggle against the existing regime. The young people produced around five hundred of these leaflets. They were distributed around theatres, railway stations, trains, on the streets of Kyiv and villages near Kyiv.

The MGB (as the KGB was then called) tracked the members of the organization down, and in February 1953 28 people were arrested. They were mostly questioned at night, with the main questions being which adults had led the young people. All admitted that their leader was Honchar.

On 16 May 1953, the six most active members of the organization were sentenced by the Kyiv Regional Court under Articles 54-10 (“anti-Soviet agitation and propaganda”) and 54-11(“involvement in a counter-revolutionary organization”) of the Criminal Code of the Ukrainian SSR to various periods of deprivation of liberty (from 6 to 10 years).  Honchar was sentenced to 10 years labour camp.

Honchar served his sentence in the Komi Autonomous SSR and in the Archangelsk region. Thanks to a review of his case during the Khrushchev “Thaw” and “points received”, Honchar was imprisoned in all for 2 years and 4 months.. He was released in May of 1955.

In the autumn of that year, Honchar was called up to do his military service, which he emphatically refused to do, being unwilling to serve such a regime.  For his refusal to serve in the army, Honchar was arrested on 22 November 1955 and sentenced by the Dimersy District Court under Article 243 to 5 years labour camp, 5 years exile and five years loss of rights.  Once again Honchar found himself in the labour camp in the Arkhangelsk region, but after 5 months he was brought back to the Lukyanovsk prison in Kyiv, and attempts were made to persuade him to agree to do military service. Since he still refused to agree to this, he was put in the Pavlov Psychiatric Hospital in Kyiv. It was assumed that only believers or madmen refused to serve in the army.  Honchar was held in the hospital for 2 months, discharged at the beginning of July 1956 and sent to his native village.

In 1965 through his friend, a teacher of Ukrainian language and literature, V. Reznyk, Honchar met the leader of the Democratic Group which was active on the Kyiv Heating and Electricity Station in Vyshhorod, A. Nazarenko. The Group was involved in distributing prohibited literature and samizdat, in particular, the work of I. DZIUBA “Internationalism or Russification?”, and also in providing material help to political prisoners. Honchar himself was not an active member of the group, as he lived in a village and could rarely get to Vyshhorod. In 1968, the group was crushed, with the most active members being tried.  Honchar succeeded in avoiding a third arrest. .

In 1966, Honchar entered the correspondence section of the History Faculty of Kyiv State University which he graduated from in 1972. He worked as a teacher in the Polissya district of the Kyiv region.

In 1971 Honchar was rehabilitated.  He writes poems, articles and prose, and his works are sometimes published in the district newspaper.

In April 1989, Honchar became a member of the Narodny Rukh Ukrainy [The Popular Movement of Ukraine] (RUKH).. He heads an original organization of the cultural association Prosvita [“Enlightenment”].

Honchar works in his native village as a teacher. 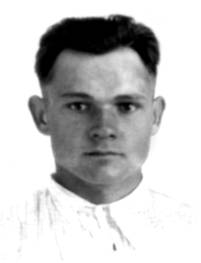