Karavansky was born into an engineer’s family. After finishing school in 1938, he entered the Odessa Industrial Institute, and then in 1930 also the external studies department of the Institute of Foreign Languages.  Still at school, Karavansky began writing poetry and stories, some of which were published in “Pioneer movement” publications. While studying in the institute, he first tried his hand at translating. Having understand once and for all that his future profession did not suit him and that he wanted to devote himself to literature, Karavansky in 1940 left the institute and volunteered for military service, so that, having served the requisite period, he could enter the language and literature faculty of the university.

In July 1941, the unit Karavansky was serving in, became encircled by German troops in Western Byelorussia. Having escaped capture, he returned at the beginning of 1942 to Odessa where he entered the faculty of literature of the university and became close to a group of Ukrainian young people connected with OUN [the Organization of Ukrainian Nationalists].  Karavansky organized a bookshop of Ukrainian literature “Osnova” [“Foundation”], and gave the profits to the group and to Ukrainian theatre. He was constantly watched by the Romanian security service (Odessa being then under Romanian occupation).

In 1944 he travelled to Romania, and returned illegally in July of the same year to the already liberated Odessa. However, on the third day after his return, while attempting to make contact with group members, Karavansky was arrested. During the investigation, Karavansky was offered freedom in exchange for reporting on the mood among students.  He turned this down.

On 7 February 1945 the military tribunal of the Odessa military district sentenced Karavansky under Articles 54-1b (“Treason against the homeland by military personnel”) and 54-11 (“Involvement in a counter-revolutionary organization”) of the Criminal Code of the Ukrainian SSR to 25 years labour camp. He served his sentence in many camps (he was involved in building a railway over the river Pechora, logging near Magadan, working in goldmines on Kolyma, building the road from Taishet to Lena, and making clothes in Mordovia).
When the conditions in the camps became less harsh after the death of Stalin, Karavansky took up his literary work and wrote a great deal – poetry, fairytales in verse, plays and translations. Many of his works were even printed in central publications (for example, in the newspaper “Literaturna Ukraina” [“Literary Ukraine”].  In 1954 he began a major work on a Dictionary of Ukrainian Rhymes.

In 1960 Karavansky’s sentence was unexpectedly halved on the basis of Article 2 of the Decree on Amnesties from 17.09.55.  He was released on 19 December 1960, having spent 16 years and 5 months in captivity.

Having returned to Odessa, Karavansky completed a course for mechanics on repairing calculating machines and worked at this job.  He was also a mechanic, a translator in the editorial office of the regional newspaper “Chornomorska komuna” [“Black Sea Commune”], a freelance journalist for the magazine “Ukraina”, travelled to the Komi republic to earn money labouring and so forth.  Often his change of job was linked to his past: he would be taken on only for temporary work or dismissed when his period spent in the camps was discovered.

Despite this, the intensity of Karavansky’s literary activity is staggering. He translated a lot, wrote a book with the title “Biography of words”, frequently produced small articles about language, prepared for publication an anthology of humoresques and satirical articles, translated on commission from the journal “Dnipro” Charlotte Bronte’s “Jane Eyre”.  In addition he finally completed his Dictionary of Ukrainian Rhymes, begun in the camp which came out on around 1000 printed pages.  This work was highly rated by specialists who considered that it was of great significance for the development of Ukrainian literary and spoken culture.  The dictionary contains about 60 thousand rhymed couplets, created by the author and not taken from the works of other poets.

In 1961 Karavansky married N. STROKATA.  In 1962 he entered the external studies unit of the Faculty of Language and Literature of Odessa University.
Karavansky played an active role in civic life: he collected Ukrainian books for Ukrainian communities living in Kuban,  approached all relevant departments and institutions with suggestions for organizing national ceremonies to mark the anniversary of the Ukrainian composer Mykola Lysenko,  spoke out in favour of films being dubbed into Ukrainian etc.

In 1964, disturbed by the increasing Russification of school and higher educational institutions, Karavansky wrote a letter to the Ukrainian Prosecutor General calling for the Minister of Education of Ukraine, Y. Dadenkov to be held criminally responsible for mistakes which had led to the violation of the rights of the Ukrainian nation. The latter had instructed that all entrance examinations to higher education be held in Russian, this infringing the rights of those who had finished Ukrainian schools. The Ukrainian language was thus being undermined in the life of the people of Ukraine, and Ukrainian-speaking professionals were not being trained, this being a contravention of Article 66 of the Criminal Code relating to national equality. In 1965 he also wrote an article entitled “About one political mistake” attacking the policy of making the study of the national language in Russian schools throughout the Soviet Union optional. This, he wrote, was resulting in a sharp decrease in the number of Ukrainian schools in Ukraine and was a violation of Leninist principles of national policy.

Karavansky became a regular author of samizdat, with all his works and letters, rejected by the official authorities, disseminated through these channels.

On 4 September 1965, during the first wave of arrests among the Ukrainian intelligentsia, a search was carried out of Karavansky’s home, but nothing prohibited was found. The next day, Karavansky sent a strong letter of protest over this unwarranted search to all official authorities, and then passed to the consuls of Poland and Czechoslovakia in Kyiv letters about the “violation of Leninist norms of national policy” in Ukraine and about the arrests of members of the intelligentsia. He called for a discussion to be held of the national question at an international conference of communist parties.

Karavansky was arrested on 13 November 1965.  Since there was no formal pretext for trying him, at the application of the KGB, the General Prosecutor of the USSR, R. Rudenko appealed against his previous release under the amnesty.  Without either trial or investigation, Karavansky was sent to finish the 25 year term (the remaining 8 years and 7 months) in harsh regime labour camps. As a sign of protest, Karavansky declared a hunger strike. In the camp he wrote a number of appeals to different authorities and to society, which led to his being put in a punishment isolation cell, and in 1966 receiving a 6-month period in a heightened regime barrack.  He went on hunger strike as a sign of protest 5 times, with force feeding being imposed each time on the 9th or 10th day. In the summer of 1967 he was moved to the Vladimir prison.

In prison Karavansky collected testimony from prisoners who had taken part in or witnessed the shooting of Polish Officers at Katyn, prepared an article about this and tried via his wife to have it smuggled outside. In summer 1969, he was arrested in prison and on 23 April 1970 he was sentenced there by an "open" court to an additional five years in prison and 3 years special regime labour camp, being declared "a particularly dangerous repeat offender".  He was charged with numerous attempts to smuggle letters, books and journals with secret writing and also his own poems to the outside world. All the texts had been written in salicylic acid. However even after this, Karavansky was able to smuggle out letters and appeals, especially about Katyn, which immediately appeared in samizdat.  In the periods between punishments, Karavansky finished his translation of "Jane Eyre" and wrote several notebooks in addition for the "Biography of words".

In 1967 a search was carried out of the flat of his wife, N. STROKATA-KARAVANSKA during which her appeals in relation to the unlawful arrest of her husband and a camp poem of Karavansky’s - "Beria’s successors" were removed.  N. STROKATA herself was arrested in 1971 and sentenced under Article 62 of the Criminal Code of the UkrSSR to 4 years labour camp.

In all Karavansky spent 31 years in captivity.

In November 1979 he and his wife emigrated to the USA.  He is involved in both civic and academic work and has published a number of works on linguistics. In 1993 his "Practical dictionary of synonyms in the Ukrainian language" was published, and in 1998 a dictionary "Russian - Ukrainian dictionary of words difficult to translate". 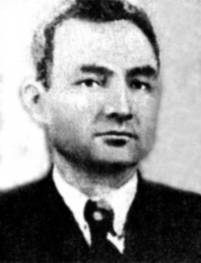