After finishing secondary school, Drach taught Russian in a seven-grade school and was an instructor for the Tetiyvsk district committee branch of the Komsomol. From 1955-58 he did military service, after which from 1959 – 1963 he studied at the language and literature faculty of Kyiv University where he took part in the V. Chumak literary study together with V. Pidpaly, V. Shevchuk, O. Lupy and others.

At this time many young people in Kyiv gathered in the “Klub tvorchoyi molodi” [“Club for Creative Young People” (CCY)]. Drach took part in literary evenings where innovative poems were read which for many “were uncomfortable and incomprehensible as though they had never been taught how to write and what to write about” (B. Kravchenko). The attitude to Drach’s poetry tended to be determined by a person’s own position: some found them exciting, while others considered them a violation of all established norms, and even more so when Drach placed in question all communist ideology.

Later Drach wrote: “I didn’t understand what was happening to me, I didn’t understand what they were doing to me. It was me, such a true Komsomol member and communist, who was being accused of … nationalism(?) They kept summoning me, intimidating, explaining, going over and over things, threatening and trying to scare me, enticing and luring”.

In 1962 a poetic work by Drach appeared in the press entitled “Nizh u sontsi” [“Knife in the sun”] which caused a furore. This was at the time that a mass-scale and systematic attack was under way of the part of the intelligentsia who had slipped out the total control of the Party and State structures. The lead had been given by Nikita Khrushchev during meetings with representatives of the intelligentsia on 17 December 1962 and 8 March 1963. “We are against peaceful coexistence in the sphere of ideology”. On 8 April 1963 the First Secretary of the Central Committee of the Communist Party of Ukraine (CPU), N. Podgorny at a meeting of a group of members of the creative intelligentsia and ideological workers of Ukraine condemned Drach, I. DZIUBA and M. Vinhranovsky because he claimed that their works were being used “by Ukrainian bourgeois nationalistic counter-revolutionaries abroad”, while the Second Secretary, A. Skaba, turned on Drach, M. Vinhranovsky and L. KOSTENKO for what he termed their “formalistic tricks”. The press began a “discussion” by writers and miners of the decisions of the meeting in the form of an anathema being declared on “formalists”, “cosmopolitans” and “renegades”, to the list of whom Drach’s name was added in the April issue of the journal “Kommunist” by the leading Party literary critic, L. Novychenko, who found the poem “Oda chesnomu trusu” [“Ode to an honest coward”] unpalatable. Drach was expelled from the university on political grounds. His poems were not published in any Soviet newspapers or journals, but they did appear in Ukrainian publications in Czechoslovakia and Poland, and in fact by inertia the first collection of Drach’s poems “Sonyashnyk” [“Sunflower”] still came out in 1963. On 31 August that year Drach read his poems by torchlight at an evening in memory of the poet Lesya Ukrainka in the “Dynamo” stadium and at other gatherings.

From 1963-64 Drach studied at the higher course for scriptwriting at Goskino [The State Committee for Cinematography] of the USSR. This was a time of creative ferment in the cinema and the communication in Moscow with young talented people from all parts of the USSR broadened his outlook.

On 2 November 1964 the Central Committee of the CPU instructed A. Skaba to draw up suggestions for intensifying “ideological educational work” among the intelligentsia. In December a meeting of the Party Committee of the of the Union of Writers of Ukraine (UWU) launched a crushing ideological attack on I. DZIUBA, Drach and M. Kholodny for “putting forward anti-Party views regarding paths for the social development of Ukraine and Ukrainian culture”. The ideological pogrom against the shestydesyatnyki (Sixties activists) peaked with a report presented in the form of a denunciation from the Central Committee of the CPU from 9 August 1965 about the work of the UWU. The arrests (of B. and M. HORYN, M. OSADCHY, I. SVITLYCHNY, O. ZALYVAKHA and others) began on 25 August. Official ideology and its repressive machine rejected a part of the generation which in general terms acted within the confines of the system, yet which at its core had already developed an alternative intellectual and spiritual realm.

This was a time when those who remained in the “greater zone”[1] were faced with a hard choice. Drach demonstrated his protest against the arrests of his friends at the preview showing of S. Paradzhanov’s film ‘Tini zabutykh predkiv’ [‘Shadows of forgotten ancestors’] by standing up together with others in support of I. DZIUBA who had taken the floor to register protest. In November, together with the film director S. Paradzhanov, the composers V. Kyreiko and P. Maiboroda, the aeroplane designer Oleg Antonov, the writers L. Serpilin and L. KOSTENKO, he signed a collective appeal asking to be given the reasons for the arrests and calling for an open, public consideration of the cases. At a meeting with the editorial board of the journal “Zhovten” [“October”] Drach and L. KOSTENKO called on writers from Lviv to come out in support of those arrested, and to offer to provide a guarantee for B. HORYN (in consideration of his youth). In February 78 people, including M. KOTSYUBYNSKA, H. KOCHUR, Drach, I. DZIUBA, B. ANTONENKO-DAVYDOVYCH, Z. Franko and F. Zhylko sent a letter to the Prosecutor’s office and to the KGB of the UkrSSR in which they expressed concern at the nature of court trials and where they dared call the accused their friends. Although these protests did not influence the fate of those facing trial, it did provide moral support. On 15 April 1966 Drach, together with L. KOSTENKO, M. Kholodny, V. CHORNOVIL and I. DZIUBA arrived at the trial of M. OSADCHY, M. Zvarychevska, B. and M. HORYN. They threw flowers to the defendants and gave them an ovation.

In order to crush the “pitiful renegades”, Party or staff meetings were organized in academic institutions, editorial offices of newspapers and journals where, with rare exceptions, those present “with anger and outrage condemned the anti-Soviet behaviour of the renegades” and “strongly supported the measures taken by State bodies”. On 26 May 1966 open party meetings took place in the UWU where, however, L. KOSTENKO and Drach attempted to defend those convicted, for which Drach received a severe reprimand. Unable to withstand the pressure, three days later Drach wrote an explanatory note to the Party committee in which, in particular, he wrote: “As a communist I now understand that objectively speaking my actions in these situations run counter to my calling as a communist and I condemn them most emphatically. In general, all these events have been a great political school for me as a communist…” This was the beginning of the capitulation of one of the most prominent and talented of the Shestydesiatnyky. On 22 July 1966 the newspaper “Literaturna Ukraina” [“Literary Ukraine”] published an article by Drach under the title “O budte proklyati vy shche raz” [“A curse once again upon you”] and directed against the foreign “Ukrainian bourgeois nationalists” who use the names of Shestydesiatnyky for their “grubby aims”. His avoidance of direct condemnation of those fellow thinkers who had suffered repression was evidence of his ambiguous position: Drach was not moving over to the opponents’ camp. After this, moreover, together with L. KOSTENKO, I. DZIUBA, A. HORSKA, I. SVITLYCHNY, N. SVITLYCHNA and V. Luchuk, he attended the trial on 15 November 1967 of V. CHORNOVIL in Lviv. In April 1968 he was one of the 139 members of the Ukrainian intelligentsia who signed a letter to Brezhnev, Kosygyn and Podgorny about the political trials in Ukraine and in Moscow. This was the final dissident act he was to take part in until Gorbachev’s perestroika. Nonetheless, he was not left in peace. The city committee of the UWU decided to check “particular issues relating to the creative work and financial-economic activity” of the Dovzhenko Film Studio as a result of which the film “Krynytsa dlya sprahlykh” [“A well for the thirsty”] with his screenplay was banned as “distorting life’s truth”. Nonetheless in 1970 a collection of his film novels “Idu do tebe” was published, followed in the year of the pogroms against the intelligentsia in 1972 (the second wave of arrests) by a large collection of poems, epic poems and translations “Do dzherel” [“To the sources”]. However in 1973 publication of a book written by M. Popovych, S. Krymsky and Drach himself, entitled “Hryhory Svovoroda” (about the Ukrainian philosopher) was cancelled by the publishing house “Moloda gvardiya”. In November of that year the writer M. Rud wrote a denunciation of Drach, L. KOSTENKO and M. KOTSYUBYNSKA with regard to their behaviour at the funeral of the writer V. Pidpaly. On the basis of this the head of the department of culture of the Central Committee of the CPU, M. Ishchenko recommended measures of repression against Drach and L. KOSTENKO, and Drach again had to “repent” at a meeting of the Party committee of the UWU. Later Drach’s name occasionally appeared in the form of criticism of the use by foreign “bourgeois nationalists” of his name and works.

The authorities had succeeded in dividing the Shestydesiatnyky and separating its radical members from those who were ready to make compromises. By 1976 Drach’s collection of poems “Kyivske nebo” [“Kyiv sky”] had been awarded the State Shevchenko Prize of the UkrSSR, and in 1983 he received the USSR State Prize.“ The “locomotive force” of each of his new collections of poetry were poems about the Party, Lenin, the War, with the obligatory for any Ukrainian Soviet writer swipes addressed at “Ukrainian bourgeois nationalists”, albeit those abroad.

Drach worked in the editorial office of the newspaper “Literaturna Ukraina”, in the film scenario department of the Kyiv Dovzhenko Film Studio and in the editorial office of the journal “Vitchyzna” [“Homeland”]. He was elected the Secretary of the UWU and the First Secretary of the Kyiv branch of the UWU. Drach was one of the first from among the Ukrainian intelligentsia to perceive in Gorbachev’s perestroika a new opportunity to extend the limits of what was allowed. He became one of the founders of the Narodny Rukh Ukrainy [the Popular Movement of Ukraine] (Rukh) and at the Founding Congress from 8 – 10 September 1989 and at the Second Congress, Drach was elected its leader, then in 1992 its co-leader.

He was awarded the Order of Yaroslav Mudry [the Wise] on his 60th birthday.

V. Ovsiyenko in consultation with I. Drach 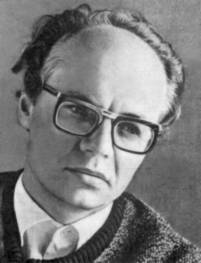