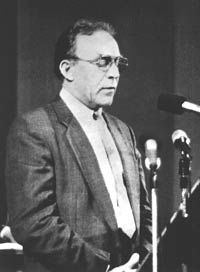 I agree with you that young people’s knowledge of the Ukrainian Helsinki Group (UHG) and of the dissident movement is near non-existent.  The main reason for this, however, we should look for in ourselves, since after accentuating the issue of human rights in the USSR, we then relaxed assuming that independent Ukraine would automatically become law-based and humane. We now have grounds for concern: the lull in human rights activity and the lack of clear succession in the dissident movement have led to political feebleness of the elite and to political apathy within society. This state of affairs is very likely to turn into tyranny.

Turning now to your questions:

Did I have a choice during those dissident days? Objectively, yes. However what was I to do when the KGB investigators tried to force me to give false testimony which would have service to justify them imprisoning Ivan Sokulsky in a psychiatric hospital?

My philosophy in life demands that if I encounter evil I must stop it. And as much as I could, I stopped it. I chose the form and means of countering it. For me the choice between fighting and capitulation did not exist.

Was I aware of the likely price to pay for my protest?

Yes, I was aware of it.  I have to say that the price I had anticipated proved somewhat less than that which the KGB was capable of. However the price did not lead me to weigh up the consequences since moral duty does not allow for choice.

What should young people know about the UHG and the dissident movement overall?

The truth and only the truth. In order to present the true history of the dissident movement it is vital to have indisputable documents and bring these to the attention of the public. Convincing evidence of the treatment by the Soviet regime of its people should be the verdicts on the “criminals” of that regime. For example, a pressing issue in the development of rights awareness is presented by the open reviews of the criminal cases against members of the Ukrainian Helsinki Group. All the cases whether for anti-Soviet behaviour, or for drugs, or rape attempts. My experience and contact with dissidents make me feel justified in asserting that all the cases against UHG members were fabricated.

In discussions in dissident circles I stress that I am not a dissident, that I’m a nationalist. In nationalist circles, I emphasize that I am not only a nationalist, but a dissident. Why such equivocation?  Dissidence and nationalism, as social movements have sovereignty as their goal. In this they are similar, and at certain historical moments they go together, supplementing one another.

Nationalism acts as a creative agent during the subjugation of a nation, and with the gaining of statehood it becomes a force encouraging the consolidation of society.

These phenomena come together when the individual and the nation are both subjugated. However when nationalism achieves its goal, i.e. wins its state, it begins to contradict the sovereignty of the individual. Not every elite always succeeds in finding a compromise between the national state level and the sovereign individual. In Ukraine’s conditions, in conditions when the elite has still not understood its proper mission, when it is dominated by egoistic interests, the discrepancy between the phenomena leads to split morality. I see dissidence as an alternative to statehood. For every state, the individual is first of all an object – the object of concern, protection, exploitation, as well as a tool for achieving the aims of the state.

In contrast to statehood, the general idea of dissidence is the person as subject. The confrontation of these ideas of the individual either as object or as subject is typical for social evolution and encompasses not only politics, but also public morals. Hence dissidence has always existed and will always exist.

In the 1960s – 1980s dissidence in the USSR took on organized forms and became gradually politicized, while also becoming more effective. This took place thanks to a sharp increase in the degree to which the population was informed, and moral support for dissidents from western countries and international human rights organizations.

The word is not successful, yet as a concept it is appropriate in a pluralistic society. However liberal and pluralistic a society is, the sovereignty of the individual will still be limited by the state and society. There will therefore be people who generate alternative attitudes.

5.  I cannot give an unqualified answer to the question as to whether the demands that dissidents made that the regime obey its own laws were a ploy. The Soviet regime was such a despotic monster that unclouded expectations would have been naïve. However a dialogue did still take place between the regime and society. Gorbachev’s perestroika was in essence the achievement of the dissidents. They sought dialogue, although they understood that in the short term they would not succeed in getting the regime to agree to this. It was necessary to make huge efforts over several decades, to bring sacrifices, in order that the monster would begin to waver. With regard to the members of the UFG, they sought dialogue and believed that it would one day happen, and at the same time adopted a ploy.

6.  What, if any, events and / or views prompted you to oppose the Soviet regime?

I was prompted to oppose the Soviet regime by reality. As a little boy, at four, six, hiding in the tall grass from German and Soviet bombs, I didn’t understand why adults fought among themselves and children had to suffer. Soviet reality my mother commented with certainty when, regular, twice a day, in the morning after prayers and in the evening before prayers, she cursed Stalin. At an early age I myself learned to give commentary to the reality around. I dreamed of reaching those key means by which I would change the course of history. I have looked for those means, but to this day I don’t know where to find them. I chose open confrontation when I saw that all the paths which I had chosen did not lead to those key means.

Of course I heard foreign radio broadcasts, spoke with people who were critical of the Soviet regime, so I was reasonably well informed about the campaign in support of the Soviet dissidents. That to some extent spurred my level of activeness at the beginning of the 1970s. As far as my letter in support of Ivan Sokulsky was concerned, my motive was moral duty. At the same time I hoped that I would be able to inform human rights activists in the USSR and abroad about the danger Sokulsky faced. I had no doubt that the KGB would decide against psychiatric persecution of Sokulsky when the democratic world found out about its plans. As can be seen, my calculation was correct and a certain part of the credit for the KGB’s backing down I would attribute to western radio stations which worked on the territory of the USSR and civic and political figures in the democratic world who supported the human rights struggle of Soviet dissidents.

The immunity of the individual and society from the return to a state of non-freedom is possible if there is: i) knowledge about such a state and laws and methods for fighting it;

ii) an ethic of moral duty and faith in an ideal;

iii) inevitability of punishment for crimes against humanity.

However they cannot be taken as isolated conditions, but in their mutually dependent entirety.

9.  How do you feel about people who collaborated with the punitive bodies?

I feel even more negative towards informers than I do towards official employees of the KGB. A KGB officer, at least theoretically, can be punished, whereas informers remain in secret even when their generation dies out.

10  What objectives did you set yourself at the time?  Has your idea of freedom changed since then?

I am reluctant to use the term “freedom”, preferring “range of possibilities”. Both in the past and now I have always been concerned about the opportunities for self-fulfilment of the individual. And since the guarantor of such opportunities is the state, then I would like to see a state which as much as possible recognizes the individual as subject. Naturally this is how I see the Ukrainian state. With the achievement of independence the range of possibilities became somewhat broadened. However I can still only cherish rosy dreams on condition that the state remains open.

11.  What advice would you give a “new” generation defending human rights?

I would advise “new” human rights activists to correct the mistake of their “old” counterparts when they entered politics and forgot to complete their task. If we have already uncovered the crimes of the Soviet regime, then let’s bring our charges to the courts! Otherwise sentences in which the Soviet regime incriminated us with their lies remain intact, and hence we will remain in history with the slanderers’ stigma. However many medals they hang on us.