Founding member of the Ukrainian Youth of Halychyna. 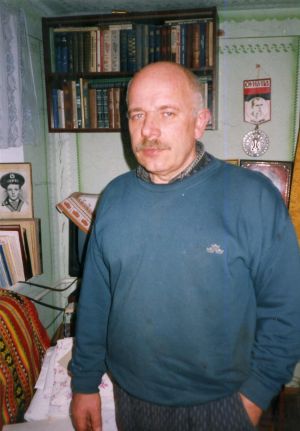 His mother, Hafiya Lutsak, under Polish rule taught at the Native School in Bereziv Village. She had a collection of old editions which she let her son and his friends to read, held discussions with with them that helped to shape their national consciousness. He had Chervona Kalyna calendar for 1936 and 1939. From his early years he listened to radio "Freedom", "Voice of America", and from 1961 remembered the name of Levko Lukyanenko, heard about the Ukrainian National Front. He listened to the stories of older people about the national liberation struggle and about repressions.

In 1966, after graduating from the 11th grade and failing to enter a higher school, Chuprei left for Dnipropetrovsk with the Komsomol assignment to a job there; together with his classmate Dmytro Hrynkiv he worked as an assembly fitter at the repair plant.

In 1967, he entered the automation department of Lviv Polytechnic Institute. He was the group head. While visiting his parents in Pechenizhyn, he conversed with his friends and classmates. This circle concerned itself with national problems and colonial situation of Ukraine in the USSR. They worried about the rise of Russification and arrests of Ukrainian intellectuals, including Valentyn Moroz in 1970. In January 1972, a new wave of arrests began and they decided to come together in the khata of Ivan Vasyl SHOVKOVYI on 31.01.1972. They decided that it was high time to attract public attention. Out of the blue emerged an idea to create an underground organization with a final name "Union of the Ukrainian Youth of Halychyna". Also present were Dmytro HRYKIV, Mykola MOTRIUK, Dmytro DEMIDIV, Vasyl Mikhailiuk, Fedir Mykytiuk, and Vasyl Kuzenko. Putting their hands on a haft, the young men swore allegiance to Ukraine. D.HRYNKIV headed the organization.

It was a natural response to the oppression felt by everybody in the Ukrainian society. Creating the organization they put their hope in the support of population that still remembered the armed struggle of the UIA.

The organization failed to design programs and charter but its target was obvious: to go on fighting for the independence of Ukraine. The members of the UUYH considered themselves heirs of OUN and planned to achieve their purpose with the help of ideological struggle, although, depending on the circumstances, they did not exclude armed struggle as well. They got hold of, read and discussed books on the history of national liberation movements, collected stories about the OUN, about individual heroes and their countrymen, and recorded the songs of rebels.

The UUYH was organized like the UIA combat units: illegal gatherings in the woods, in the mountains; each member had an alias (Chuprei had an alias Khmil). They used to come together during the church holidays, sometimes in the forest, where they conducted range practice. However, Chuprei did not attend all meetings as he was studying in Lviv.

In the fall 1972, in Pechenizhyn, the UUYH members laid a wreath with blue and yellow ribbons to Oleksa Dovbush monument on the anniversary of his death.

The organization intended to go to other territories and to establish contacts with other organizations, even foreign ones. Chuprei had to study the mood of the students and involve them in the organization. To one of such meetings he brought Lviv Polytechnic student Bohdan Romanyshyn.

The members obtained weaponry by way of expropriation, to which Chuprei was not privy. But he informed D.HRYNKIV that there were two guns in the house of student of the same year Lotov. D.HRYNKIV sent a letter to Chuprei dropping a hint about the operation "Lotus". The KGB seized that letter on 15.03.1973.

The organization experienced failure having entrusted engraver Taras Stadnychenko with a task to engrave its name on blank stamp. He reported to the KGB. D.HRYNKIV ordered to destroy everything related to the organization; but the search and arrest were a surprise and Chuprei, in contrast to other UUYH members, was taken unawares. On 17.03.1973, they brought him to Ivano-Frankivsk KGB and charged of “betraying homeland” under art. 56 of the CC of the UkrSSR. Only there he remembered how the Dean had sent for him to scold him for the decline of ideological work in the group, trade-union boss’s advice to control what he was talking about, warning of the landlord’s son eavesdropping on alleged drug addicts.

Chuprei admitted self-evident things only. In the middle of investigation process the case was re-qualified to art. 62 part 1 (“anti-Soviet agitation and propaganda”) and 64 (“creating anti-Soviet organization”).

The Ivano-Frankivsk Oblast Court in closed session of several days delivered judgment on 09.08.1973 (his relatives were admitted to listen to the sentence): as the head of the organization D.HRYNKIV was sentenced to 7 years in high security camps and 3 years of exile, D. DEMYDIV and V-I.SHOVKOVYI to 5, M.MOTRIUK and Chuprei up to 4 years.

He found himself in camp VS-389/36 in the Village of Kuchino, Perm Oblast. He worked at an iron manufacturing plant covering heating coils with harmful sand.

The imprisonment became a new school for Chuprei, because there were Levko LUKYANENKO, Yevhen SVERSTIUK, rebels Ivan POKROVKYI, Mykola Kurchyk, Andriy Turyk, political prisoners of other nationalities. He took part in the protests, hunger strikes, in the struggle for political prisoner status, rejection of Soviet citizenship, in some stages of preparation and transfer of information out of the camp.

In early February 1977, the jailers took Chuprei to the hospital in the zone no. 35 to make him healthier before discharge. In Ivano-Frankivsk KGB they gave him instructions on how to behave in future and in Pechenizhyn he lived under administrative surveillance.

Chuprei was in no rush to work at the request of the authorities; he used to go to a plant and say that he had been recently discharged from the political zone, where he had done his term as a particularly dangerous state criminal. Of course, they did not hire him. Finally, he was hired as a musician in the restaurant band, and the KGB took him out of there. He went to work as an electrician at a utility enterprise.

In November 1983, he married sister of V.SHOVKOVYI Liuba and began to build a khata. The KGB began pressing him to sign an article against the human rights activists, particularly against Lukyanenko, owing up that he, Chuprei, had been drawn into criminal activity. Chuprei refused and construction stopped. Since 1992 he rented an apartment in Kolomyya and worked at the cheese plant. In 2002 he went to work abroad.

He was a member of the Ukrainian Helsinki Union; then from 1990 of Ukrainian Republican Party, one of the organizers of the Union of Political Prisoners, Memorial, Society of Ukrainian Language in Kolomyya Region.