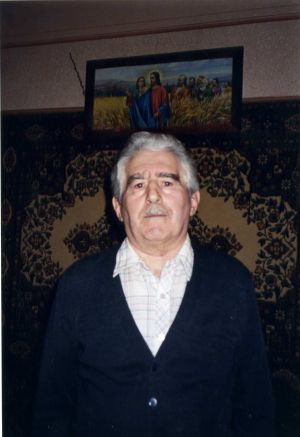 Peasant by origin. In the past his father was a Sich rifleman, his two brothers were KIA in the battles near Uman in 1919. In 1933 his father went about famine relief for Great Ukraine. The youngest brother, Teodor Olenchak, was killed while crossing the border in February 1940, his father was murdered by the Bolsheviks in Zolochiv prison in 1940. When the German occupiers uncovered burial place of 727 tortured prisoners, Mykhailo’s mother Anna recognized his father’s quartered body without tongue and eyes, with nails in his right leg… Mykhailo also went to look at the bodies of tortured prisoners.

Father edified his four children, “Children, you should study, because we need learned and conscious people, because Ukraine is in the yoke.” Mykhailo’s parents sent him school before he was seven years old, he studied willingly. In September 1941, he joined the youth organization “Young Man” (later “The Young Man of UPA”). He underwent military training. In the fall 1943 Kozak his superior sent him on a reconnaissance mission for the first time.

In 1948, Olenchak, like many young men, was summoned to go to the mines of Donbas. He did not go and went in hiding. They apprehended him, and the Major said, "If you go to the Donbas, we will not try you, if not, we know everything about you.” Olenchak promised to go, and he escaped again.

On 08.04.1950, the Bolsheviks encircled the village three times and transferred all villagers to Siberia, including his mother with his younger brother Myroslav, even a family of deaf mute. Nine boys and six girls, members of the "Youth", were arrested. The officers beat the boys and outraged the girls and then took them to the Lviv prison. They kept Olenchak in a cell 5 by 3 m with 26 inmates. They beat him 10 days and crippled his leg, but he withstood all tortures. On 19.08.1950 the military tribunal sentenced all of fifteen prisoners under art. 54-1a, 54-11 to 25 years of imprisonment.

The convicts were brought back to Zolochiv. Olenchak together with other persons was working to prepare his escape, but a stoolie informed the jailers and the conspirators were brought to different cells. On 29.01.1951 the train with 700 prisoners left Lviv. There were 74 prisoners in the car in which Olenchak traveled, mostly young people. The transfer to Vorkuta took four weeks.

Alexander worked in the mines. His ration consisted of 550 grams of bread, skilly, stinking cabbage, rotten or frozen potatoes, 450 grams of sugar once a month. Not enough water. The shift lasted 12 hours plus transfer to the mine, searches, inspections. On 25.07 the mine no. 29 they went on strike under the slogan “Freedom for us and coal for our Motherland" demanding to remove locks from the barracks, release the young ones, the elderly and women, not to escort to work in handcuffs, to reduce the working day to 8 hours and so on. On 1.08 the insurgents were machine gunned from the towers. According to Vasyl Kurylo, 376 prisoners were killed, hundreds were wounded. But on 07.26.1953 the Olenchak’s brigade was suddenly transferred from wood processing plant to the construction site of mine no. 30. Here Olenchak organized a strike, for which he was punished with 6 months of medium security barrack. He did his term in the penalty camp no. 62, but refused to work. He was utterly exhausted and they returned him to the construction site of mine no. 30.

In 1956, Olenchak’s term was reduced to 15 years and on 2.08 he was released with clearing of a criminal record and deprivation of rights by the decision of the Commission of the Presidium of the Supreme Soviet of the USSR from 31.07 with application of the Decree of 24.03.1956. He was sent to the special settlements in Tomsk Oblast, where his mother and brother stayed. In order to be discharged earlier in time he went to work in a school in a remote area. On 07.05.1958, he was struck off the register in the special settlement.

On 27.09.1958, on the Holy Cross Day, Olenchak returned with his sick mother to the Village of Bilyi Kamin, Zolochiv Region, to her native khata. From Siberia also returned his father’s sister Mariya Andriyivna Gavrys, whose husband was murdered along with Olenchak’s father in Zolochiv, and two sons were killed. His mother soon died of stomach cancer.

The KGB demanded that Olenchak should return to the Tomsk Oblast, where he had not been struck off the register yet. As his brother informed, a new case had been forged or him there already. Olenchak went to Lviv, then to the Carpathians. On 08.08.1960 he married in Kolomyya Oresta Yulianivna Semotiuk and got registered at her address. Nevertheless, the officials requested that he left the place within 24 hours. He worked as a barber in the military unit, then at the railroad terminal. In 1961, his son Myroslav was born.

On 1.10.1963, Olenchak was arrested again on charges under art. 228/17 as far as it was allegedly his fault that in the military unit some weapons had been lost. The agents conducted four searches with the help of mine detectors and found The History of Ukraine-Rus by M. Hrushevskyi, “Prayer” by Moschaka “Oh, Ukraine, Holy Mother of Heroes”. He was accused of anti-Soviet agitation and propaganda under p. II, art. 62. The Ivano-Frankivsk Oblast Court at Christmas 1964 (9.01) withdrew accusations of keeping weapons and sentenced Olenchak under art. 62, p. II: six years of imprisonment and three years of exile, and recognizing him a special dangerous recidivist.

In Lviv transit prison the jailers kept Olenchak in the same cell with criminal offenders who lost him at cards; had he opened his eyes, they would have cut him with razor blades, as they politely admitted having learned that Olenchak had been a political prisoner.

Via Kharkiv and Ruzayevka he arrived in Mordovia camp no. 7 (Yavas Station). He served his term together with Levko LUKYANENKO, Bohdan REBRYK, Yaroslav HASIUK, Volodymyr LEONIUK, Bohdan HRYSTYNYCH. In 1965, the prisoners on particular treatment were transferred to the Sosnovka camp no. 1. He finished his term in the camp ZHH-385/3 (Village of Barashevo). On the day of transfer into exile the jailers tried to provoke a fight in order to convict him as a criminal.

He underwent an ordeal during the transfer Chelyabinsk—Novosibirsk--Krasnoyarsk. In January 1970, thanks to CID Chief Ivan Shliahenko, a native of the Town of Zolochiv, he was left to serve his exile term in the regional center Bolshoi Uluy, 46 km from Achinsk. He lived from hand to mouth in the apartment of an old woman and worked hard at the sawmill 4 km away. The same Shliahenko fixed Olenchak up with a job of travelling hairdresser and even allowed him to take a two-week holiday and visit their native land.

On 08.06.1972, Olenchak was released and late in June he returned to Kolomyya. Thanks to positive references he acquired the right of residence with his wife and son. He worked as a hairdresser until 1991.

Olenchak was a member of the Constituent Assembly of the All-Ukrainian Society of Political Prisoners and Repressed on the Lviv Square in Kyiv (03.06.1989); he also participates now in the Brotherhood of UIA Soldiers.

He lives in the City of Kolomyya. Retiree. Olenchak writes his memoires.