Worker, leader of the youth group which distributed leaflets against the policy of M. Khrushchev. 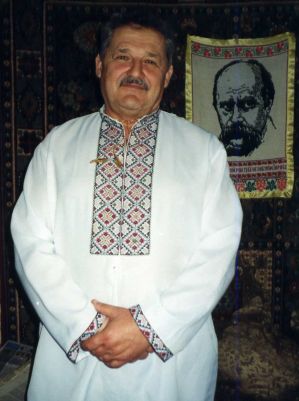 Pavlo’s mother, Mary Podust, died in 1948. His father was a war vet, had many awards and injuries. Due to the ill health he sought treatment, for which in 1949 he was jailed for four years and did construction work building the Kuibyshev hydroelectric station. Soon after his discharge he died. Aunt brought Pavlo up.

After the Russian high school in Sarata, in 1957 he entered building technical school in Odesa. Pavlo studied there for two years and upon graduation for four years he did a job at Komsomol construction site in the Town of Kotovsk, Odesa Oblast, building a sugar plant. Pavlo was a Komsomol activist.

In 1960, Otchenashenko was delegated to the All-Union Convention of Communist Record-Setters in Work Productivity in Moscow. During dinner, M.S. Khrushchev came up to Odesa delegation and said, “Well, Odesites, let’s drink to your deeds, to your work!” Soon after there was a second meeting…

Since May 1963, he built Illichivsk Seaport. Then he entered the evening the evening department of the Odesa Construction Institute, where he studied until his arrest. He worked as a foreman of construction brigade.

Otchenashenko attracted a group of critically-minded young people, about six of them, dissatisfied with economic situation of workers and the absolute power of the CPSU. They began to draw cartoons on Khrushchev, government on the back of posters and secretly posting them in public places in Odesa and Illichivsk. Thus, during the Khrushchev slump, on 13.09.1963, on behalf of a non-existent “Pure Marxist-Leninist Party” they distributed leaflets reading: “Comrades! Give the brushoff to the party of Khrushchev! Not believe the windbags! Price rise. Wage cuts for workers. Failure in the agricultural sector. Here are the true results of Khrushchev’s party holding the reins”. On 18.09 12 more leaflets were scattered on the streets reading: “Down with the party of Khrushchev!”

The KGB pinned it on him finding out how he bought posters and political literature in bookstores. Taking note of the tail, Otchenashenko went from Illichivsk to Odesa and carried out experiment in the Shevchenko Park: suddenly he did an about-face and saw the agents. Therefore he forbade his friends to approach him and said that he would take everything on.

On 28.09.1963, the men in civilian clothes at work told him, “You were nominated to work abroad. We’ve got to elaborate details”. They took him to the seaport personnel department and announced that he was under arrest. In Odesa Department of KGB they conducted two-hour cross-examination:  “Who’s your boss? What are your contacts in the US? Who pays you?” Major General Kuvarzin shouted, "How You could caricature our father Nikita Sergeevich? How could you do the dirty on him?”

Three Volgas escorted Otchenashenko to Illichivsk, and there was an electricity failure. The hostel search fetched no evidence. So Otchenashenko was placed in pre-trial cell in Odesa.

Otchenashenko betrayed nobody, “I kept like-minded friends in my mind forever."

On 23.12.1963, the trial at Odesa Oblast Court lasted half an hour, "Do you confirm that these are your leaflets?" Otchenashenko confirmed. "Do you repent or not?"--"No, I think I did all this deliberately, and rightly so."--"Well, then, if you want to get a term, you will get it." Sentence: four years of imprisonment "with isolation from other categories of crimes." This meant strict security political camps.

On the way to Mordovia Otchenashenko was transferred to Moscow, where MS Khrushchev himself wanted to see him, “Odesite, why do you lampoon me? Well, if you like it, you can do your term!"

He did his term in Mordovia camp no.11, Yavas Station, as well as in the camp no. 3, Barashevo Station for a short while. Otchenashenko took part in the protests, including sit-ins.

The Russified Ukrainian was impressed by "Ukrainian Diaspora": one half of camp population was Ukrainians. Rebel Vasyl PIDHORODETSKYI was the first to wonder that he, having a Ukrainian last name, did not know the language of his ancestors. He worked at the sawmill with rebel Mykola Konchakivskyi, knew Antin Oliynyk and Roman Semeniuk, who then escaped from the camp in desperation. He learned the Ukrainian language. He made friends with the guys from the Baltic States and the Caucasus. The imprisonment became a school of civil tempering.

By the decision of the panel of judges on civil cases of the Supreme Court of the UkrSSR from 23.01.1964 by cassation his penalty was reduced to two years. Being released on 28.09.1965, he had nowhere to go, and then on V.PIDHORODETSKI’S advice Otchenashenko went to his brother in the Village of Krushélnytsia, visited the relatives of M.Konchakivskyi in the Village of Rudnyky, Lviv Oblast. They showed him the rebel hideouts in the Carpathians.

Otchenashenko was forbidden to live within 100 km from the oblast centers. He could get a job in Bilhorod-Dnistrovskyi, but they refused to register him as it was situated 80 km from the center. Then he turned to the Chairman of the Presidium of the Supreme Soviet of the USSR M. Pidhornyi asking to permit him to go abroad and only then he was registered in Bilhorod-Dnistrovskyi.

He tried to reinstate himself in Odesa Construction Institute but his application was turned down. Then he entered it again. But he got D-grade for his exam score for the first year: "You’ve failed your exam… Let’s come out for a moment… You are not allowed to study in this institute."

Meanwhile, Otchenashenko married: his son Olexandr was born in 1967.

In March 1989, he headed the Bilhorod-Dnistrovskyi Association of Unlawfully Repressed set up by him.

With the advent of perestroika he was among the first members of the People’s Movement of Ukraine. Under the pressure of the authorities he had to resign as head of the construction department. In Bilhorod-Dnistrovskyi he participated in the bringing down of the Soviet flag on the building of the executive committee and burning it down. Then the criminal proceedings were instituted against Otchenashenko and others. However, the new administration closed the case.

In 1994, the People’s Movement of Ukraine nominated Otchenashenko as a Verkhovna Rada deputy, but then the wrongful accusations against him were made imaging him as a criminal offender. Then he turned to President Leonid Kravchuk. He received a message dated 05.01.1995 from the Odesa Oblast SSU, that he had not been rehabilitated; then on 14.02.1994 he received the rehabilitation certificate with an apology in accordance with the Law of UkrSSR from 17.04.1991 "On Rehabilitation of the Victims of Political Repressions in Ukraine”. Then his son was severely beaten by unknown persons. Yet Otchenashenko was the fourth on the list of 16 candidates.

In 1995, Otchenashenko retired, but he is still the head of a construction administration.

By the Decree of the President of Ukraine from 26.11.2005 he was awarded the Order "For Merit", third grade.

Since 2004 Otchenashenko lives in Odesa.