Founding member of the United Party for the Liberation of Ukraine (UPLU).

From the peasant family.His father was a UHA shooter; when the war broke out in 1939, he was drafted into the Polish Army. Returning home, he was arrested for border crossing. His mother was forced to join the collective farm. His father was released in May 1940. The land had not been sown and the country was starving.

While in school, in 1948, Yarema together with 15-17-year-old boys set up Yevhen Konovalets Underground Organization. It included Yaroslav Kostiuk, Stepan Melnychuk, Vasyl Boleziuk, Stepan Motyl, Petro Motyl, and Stepan Kostiuk. He kept in touch with a member of the UIA youth network Hryts Rizhniak from a nearby village and with Yaroslav Shevchuk in Pyadyky Village. The Yevhen Konovalets Organization in Pyadyky included Myroslav PLOSHCHAK, Bohdan GERMANIUK, and Mariya Zamulynska. They distributed UIA fliers, broke windows of collaborators, beat those who returned from the Soviet Army and spoke Russian. During the fast they did not sing anthem before classes, on Easter three days they stayed away from school, and went in for games near the church, where they sang hayivkas. They displayed national flags; three times near the club they erected the Cross.

In 1949 school director Hrechukha ordered all seven-graders to go to the RegionCommittee to be admitted to the Komsomol. The boys, after the example of Yarema, jumped out of the windows and the girls dispersed at the Kolomyya Railroad Station.

When a haystackburned in the field the commander of the task force Bordeyev beat up Yarema. Once, having illegal literature, at Kolomyya Station, he escaped from NKVDraid.

In 1949, T. finished 7-year school and entered the Kolomyya woodworkingcollege. In December 1952, he was drafted into the Soviet Army. He underwent one-year training as an aircraft maintenance technician at Morozovsk Station, Rostov Oblast and then served as an aircraft technician in Wiener Neustadt, Lower Austria.

He demobilized in 1955 and shared with M.PLOSHCHAK and B.GERMANIUK his plan to expand the organization network and learned that it was already in the Pyadyky Village. In order to attract new people T. got a job of sawmill worker at the wood-processing plant in the Village of Vyhoda. His fellow villager Petro Hayovyi, head of the planning department, suggested him to move to Broshniv Village and create a cell there. T. went to work as a turner at the central repair shop. In 1957-58, he was a correspondence student at the Sniatyn agricultural college. He took part in amateur performances, met chorus conductor Ivan Strutynskyi, through him with Bohdan TYMKIV whotogether with I.STRUTYNSKYI and Vasyl PLOSHCHAK developed a program of the United Party of Liberation of Ukraine. The word "united" meant that all segments of population and various political forcesshould support the cause of liberation.

The UPLU aimed atgradual disconnection from the USSR and creation of an independent Ukrainian state. For this cause they set up party cells in such villages as Pyadyky, Vyhoda and Broshniv, in such cities as Kolomyya and Ivano-Frankivsk. They intended to establish cells throughout Ukraine, get in touch with organizations in other republics so as to break with the USSR. The UPLUbrought their ideology to public attention holding them up as an example,campaigning, participating in amateur activities, awakening national consciousness of youth.

Two years the UPLUwent in for organizational workonly. They intended to get a typewriter; however, during two years the organization did not put out any flyers and did not carry out any acts. They observed secrecy: T. had a pseudo "Khmara”. In spring 1958, on a meadow near Prut River, not far from Kolomyya, they approved the program of the organization written by B.TYMKIV having taken into account the proposals of I.STRUTYNSKYI and V.PLOSHCHAK. In June 1958, at a meeting in the Svicha Riverside Village of Vyhoda, members B.GERMANIUK, T., I.STRUTYNSKYI, P.Hayovyi, M.Kozak and then others took an oath signed in blood. P.Hayovyi was instructed to keep the text of the oath.

On 04.12.1958, T. was arrested in Broshniv Village, Rozhniatyn Region. The search was conducted by known "expert" in anti-Sovietism, Lieutenant Colonel Poluden, Captains Porubai and Honcharov. They confiscated the program and charter of the UPLU, portrait of Yevhen Konovalets, pre-war magazines "Zolotyi Kolos" and "Chervona kalyna", "History of Ukraine" by M. Hrushevskyi.

The rest of the organization was arrested on that day as well. 28 members were questioned in the case, 8 convicted on charges of anti-Soviet agitation and propaganda and creation of the anti-Soviet organization (articles 54-1 "A" and 54-11 of the Criminal Code of the UkrSSR). Some members were witnesses in the case. As it turned out, P.Hayovyi squealed on the organization. But the main traitor was former political prisoner Myron Maslovskyi, who was еру right-hand man of UPLU head B.GERMANIUK. He informed the investigators about almost all meetings and activities of the organization.

During the investigation and throughout his stay in jail T. suffered from stomach ulcers. Although they did not apply physical tortures to him, he was led along the corridor where he heard the cries of tortured.

At trial, Prosecutor Antonenko demanded death penalty the leader of the organization B.GERMANIUK and maximum terms to other defendants. Despite this the Ivano-Frankivsk Oblast Court on 10.o3.1959 sentenced B.GERMANIUK, M.PLOSHCHAK, T., B.TYMKIV and I.STRUTYNSKYI to 10 years of correctional labor high security camps with confiscation of property, M.YURCHYK and I.KONEVYCH to 7 years with confiscation, V.PLOSHCHAK to 2 years.

In the fall 1965, T. was transferred to camp no. 1, where he met with UGCC priest Denys Lukashevych, UIA Colonel Vasyl Levkovych, Sixtiers V. MOROZ and M. HORYN.

The KGB accused T. of having sent abroad the statement; they interrogated him and threatened to bring a new action against him. In winter 1966-67 they brought T. to Ivano-Frankivsk for "rehabilitation". Then the Amnesty International interceded for him as chronic invalid with gastric ulcer. On 05.03.1967, T. was brought back to camp no. 11. Here he made friends with P.ZALYVAKHA, B.HORYN, M.MASIUTKA, Ya. LESIV, H.PROKOPOVYCH, Ya. HEVRYCH, I.HEL. The culture flourished in this camp; there was a lot of literature to read; B.HORYN organized Taras Shevchenko soiree. The visits of "public activists" (Taras Myhal, Luka Pavlyshyn, Ivan Hnatiuk) intended to "reform" political prisoners were a peculiar entertainment.

He was discharged on 04.12.1968 and returned to his native Village of Hody-Dobrovidka. On 30.05.1969, he married Mariya Pokladok, fathered her son Rostyslav (b. 1963). Since then he has been living in the Village of Popovyci, Mostyska Region, Lviv Oblast. He worked as a laborer at construction administration no. 15 in the Village of Khindovychi from 1974 to 1983, as a loader at Mostyska Electron Plant, and then up to his retiring in 1994 as a fireman at Popovytsky Neuropsychiatric Establishment.

On 02.02.1977, the Mostyska militia carried out search at T.’s home, as if they were looking for moonshine, and accused him of illegally purchasing 11 kg tin. The case turned into numerous interrogations of him and his wife by the KGB officers, harassment and consideration of the "case" at a meeting of the workers of the Electron Plant accompanied by accusations of nationalism and anti-Soviet activity.

In 1988, T. joined the Ukrainian Helsinki Union. In the early 1990’s he headed the regional organization of the People’s Movement of Ukraine. He was a deputy of the first convocation of the Regional Rada. He is a member of the Ukrainian Republican Party.

Since 1991, he actively participated in the reburial of UIA participants and restoration of the graves of soldiers of the liberation struggle in the villages of Hodyn, Husakiv, Stoyantsi, Krukenychi, Horosnytsia, Mostyska Region. He was awarded several honorary awards and a merit badge "Cross of Victory" for his role in the national liberation struggle, in establishing and developing the Ukrainian state.

He wrote many articles, leaflets, books, memoirs (Storm) for which on 6.06. 2007 he was awarded the International Literary Prize of the Voskobiynykivs Foundation in the genre of memoirs. Besides the Bureviy he published the following books Providence, Shackled Ukraine, and Knights of Iron Spurs. He redacted the memories of his sworn brother and rebel Vasyl PIRUS. Retired, rehabilitated. 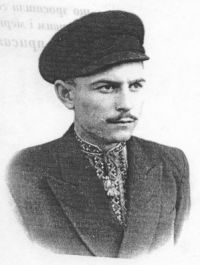 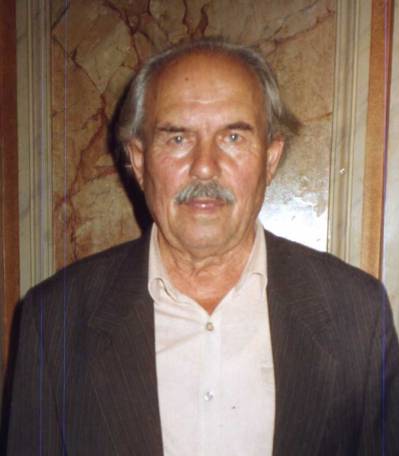