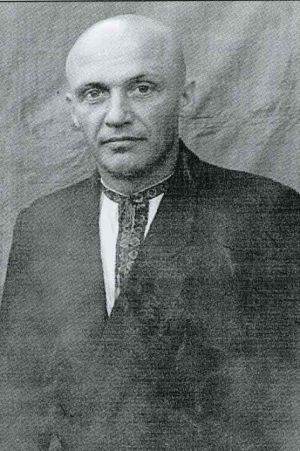 The father of S. died two months before the birth of his son. 19-year-old mother Hanna Hoda gave her son to her parents for upbringing. In 1923, S. finished primary school and in 1924 went to the Tarnopol Gymnasium, where Myron Zarytskyi taught mathematics up to 1926 and hisdaughter Kateryna studied, the future wife of S. Here the teenager became a member of Plast and then OUN. From 1927 he studied at the Ukrainian Gymnasium in Řevnice (Czechoslovakia), and since 1933 at the Faculty of Architecture of the Prague Polytechnic. He made friends here with Oleg Kandyba (Olzhych) and went in for sports.

In 1937,the Polish authorities detained S.on suspicion of belonging to the OUN and sentenced him to five years. He did his term in the Bereza Kartuska prison based in Bereza Kartuska, Polesie Voivodeship (today Biaroza in Belarus). In the Stanislaviv Prison S. met Kateryna Zarytska (she did her term for participating in the assassination of Polish Minister of Internal Affairs Bronisław Pieracki), who he married on 11.05.1939 after being released after the collapse of the Polish state. In January 1940, S. went to the Mathematics Department of Lviv Polytechnic Institute; since March he also studied at art courses. He became a member of the OUN Regional Leadership.

On 03.22.1940, after four months of happy family life, the Bolsheviks arrested K.Zarytska and S. for their involvement in OUN On 02.09.1940, in Brygidki jail, K.Zarytska gave birth to her son Bohdan, who at the age of eight months she committed to the care of her parents. In June she escaped from the ruined jail. She headed the women’s OUN and subsequently up to her arrest on 21.09.1947 she headedthe UIA Ukrainian Red Cross, Liaison officer toUIA Commander in Chief General Roman Shukhevych-Chuprynka. S. was sentenced to eight years in jail and transferred under guard to Vladivostok.

In 1947, in Vorkuta, S. set up an underground organization "OUN-North" (another name

"Polar Command of OUN"), which fought for the rights of political prisoners, helped them to survive, maintain identity, prepared strikes and uprisings. This was one of the reasons for the separation of criminal and political prisonersby the order of the Ministry of Internal Affairs on 28.02.1948.

In 1948, S. was released for the expiration of imprisonment. In order not to stay in exile, S. agreed to return to work as a freelance surveyorin 2 months. In Lviv, through R.Shukhevych’s liaison officer Halyna Didyk, he restored contact with him and returned to Vorkuta, where by the order of the OUN Command he continued to organize clandestine struggle in concentration camps, information accumulation on concentration camp contingent and units guarding it.

In May 1949, S. returned to Lviv and through liaison officer Dariya Husiak met with top leaders of the UIA. On 29.07, he was arrested on the Lviv street and by the order of the Special Council of the Ministry of State Security of the USSR from 26.10.1949 they sent him into exile to a special settlement in the Krasnoyarsk Krai. However, from there S. continued to direct underground activities. In connection with the publication in the West of the memoirs of former political prisoners, the NKGD tracked down the organization "OUN-North". On 15.12.1952, S. was arrested and on 15.09.1953 sentenced by the Tribunal of the White Sea Military District under art. 58-1-v, 58-10 of the CC of the RSFSR (traitor to country, anti-Soviet agitation, organization of underground organization and preparation of an uprising) to death, which was replaced by 25-years of imprisonment on 25.11. However, "the OUN-North" was not fully uncovered; so it proceeded with its activities and grew into a large "Union".

Since March 1954, S. served two months in Kirov, then via Sverdlovsk and Petropavlovsk they brought him under guard to Dzhezkazgan, to Kengir Settlement in southern Kazakhstan and put him into Steplag Jail where one half of the prisoners were Ukrainians and one quarter were from the Baltic states jailed for their participation in the national liberation struggle. The housing conditionsand work there were very hard. In May 1954 there began a strike that turned into Kengir uprising. It lasted from 16.05 through26.06.1954. Actually, the rebellion was instigated by criminal prisoners who had forced their way into the women’s political zone. The political prisoners made a valiant attempt to rescue the women and the guards opened fire at them. The political prisoners turned down the inside walls and fences, drove away ​​administration, and set up self-defense in the camp with 20,000 prisoners. The OUN members did not allow S. to join the commission controlling the uprising. He joined the conspiratorial center. He openly organized a chorus, composed the hymn of Kengir uprising, established a census of prisoners, and helped physicians to rescue prisoners during the uprising. This was the only GULAG uprising crushed by tanks. S. was transferred to the port of Vanino and then to Magadan.

After the Kengir and other uprisings the punitive system was reformed, two thirds of prisoners were released. By the rulings of PrykVO of 5.03.and 16.04.1957 the charges of 1940 and 1949 against S. were canceled and in these cases he was rehabilitated, but the 25-year sentence from 1952 was not affected.

Taking into consideration that S. organized political prisoners everywhere, carried out literary, historical and religious holidays, he was often transferred from camp to camp. Since 1960 he did his term in Taishet, Sverdlovsk, Kazan, in winter 1962 he was transferred to Mordovia camps. In the mid 60’s the KGB officers brought S. to Kyiv, Ternopil, Lviv, arranged meetings with his son and relatives, took him to institutions and theaters to break his will and force him to make a public confession. After all, "he was a pillar around which spiritual life revolved," recalled P.ZALYVAHA. Following the motto "Wherever you are do your best for Ukraine”, in times of weakening of the regime S. organized literary evenings, historical and religious holidays, lectured on a variety of subjects: history, architecture, music, painting, geography, ethics, and sports. According to the prisoners, S. worked out the code of conduct of a political prisoner, often mediated in conflicts not only between Ukrainians, but also among people of other nationalities. He was the acknowledged leader attracting not only Ukrainians, but also representatives of other people oppressed by Russia. His talent of an organizer, refinement, all-round education, high intelligence, dedication to the cause of Ukrainian liberation inspired people of different nationalities in their struggle for statehood. In many countries people write about him as a model Ukrainian.

S. found a true understanding of the new generation of political prisoners, the Sixtiers. Not everyone came to the camps already nationally conscious, but under the influence of individuals such as S. they became bearers of the national idea.

There remain letters to his son Bohdan written in his beautiful handwriting, drawings, his works Artistic Prague, Myron Zarytskyi, Instinct. Reflexes. Ethics and some translations.

In spring 1971, the prisoners of different nationalities on initiative of S. held at the camp ZhKh-385/17 A (Oziornyi Settlement) two-week celebration of the Centenary of Lesia Ukrayinka, whose works he liked very much.

On 06/01/1967 S. had a myocardial infarction. On 16.06.1971, while strolling with M. Horyn he died of the second heart attack. At the time his wife K.Zarytska was in the camp ZhKh-385 / 3-4 in Barashevo. The body of S. was transported to Barashevo where the hospital was situated and was buried there with a volume of Lesia Ukrayinka. By this indication his burial was identified more than 20 years later by former political prisoners Vasyl PIDHORODETSKYI, Mariya Vulchyn, Stepan Martyniuk-Lototskyi and his son Bohdan for the number of his grave 8a was transferred to the next grave.

On 28.09.1992, the reburial ceremony took place at Lviv Lychakiv cemetery where he was buried next to the mortal remains of his wife Kateryna Zarytska ashes, which had done 25 years of imprisonment and died on 29.08.1986 in Volochysk, Khmelnitskyi Oblast.