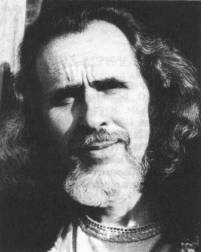 Oles Berdnyk was born into a blacksmith’s family. In 1943 he volunteered for the front, and was only demobilized in 1946. He finished 7 classes of secondary school as an external student, and then from 1946-1949 studied in a theatre studio at the Ivan Franko Theatre in Kyiv.

In 1949 Berdnyk made a speech at an open Party meeting of the Ivan Franko Theatre where he was now working (this was during the campaign against “cosmopolitanism”). He was appalled at the way in which the theatre’s actors were prepared to denounce those who until recently had been their friends and colleagues, as well as at the fact that classical plays were being “re-hashed” on directives from above.

On 24 October 1949 Berdnyk was arrested in the town of Halych where he was working as the executive secretary for the local newspaper. He was charged with having made verbal anti-Soviet statements against the system of collective farms and “discrediting Marxist-Leninist teachings”. He was tried in Kyiv on 25 April 1950. At the trial he spoke of having been subjected to torture and violence during the pre-trial investigation, with this resulting in the charge being added of slandering law enforcement bodies.

He was sentenced under Article 54-10 of the Criminal Code of the Ukrainian SSR (“anti-Soviet agitation and propaganda”) to 10 years deprivation of liberty, 5 years exile and 3 years loss of civil rights. He served his sentence in the far North and in Kazakhstan.

In 1953 he was sentenced in the labour camp under Article 58-13 of the Criminal Code of RSFSR to 10 years deprivation of liberty for an escape attempt. He was pardoned in 1955 and returned to Ukraine, where he was involved in literary activities, becoming a member of the Union of Writers of Ukraine in 1957. Berdnyk became a popular writer of science fiction, and by 1972 around 20 of his novels had been published. He was also popular for his articles and his lectures on futurology.

In April 1972 Berdnyk was living in the flat of M. and R. RUDENKO when a search was carried out. KGB removed the work of I. DZIUBA “Internationalism or Russification?” and two typewriters. On 28 April Berdnyk declared a hunger strike demanding that the items confiscated be returned, and continued it for 16 days. He gained a meeting with the Deputy to the First Secretary of the Central Committee of the Ukrainian Communist Party, P. Shelest, who apologized, but said that “Party bodies cannot interfere in the activities of the KGB”. On 14 May, his typewriters were returned, however advertisements about his public appearances were suspended, his works stopped being punished, and a witch hunt against him began in the Ukrainian press. From 1974 Berdnyk tried to get permission to emigrate. His works were published abroad from 1975.

On 13 August 1976 the central department for the protection of State secrets in print under the Council of Ministers of the USSR issued Order No. 31, with the stamp “For official use only”. This read: “The books of Berdnyk, Oleksandr Pavlovych (Oles Berdnyk) are to be removed from all general and specialized libraries, and from the book trade”. It was at that time that Berdnyk was also expelled from the Union of Writers.. He worked as a stained-glass window decorator for the organization “Artist”.

In autumn 1976, Berdnyk held discussions with M. RUDENKO, O. MESHKO and L. LUKYANENKO about the creation of the Ukrainian Helsinki Group (UHG). On 9 November that year, as a founding member, he signed Memorandum No. 1 “The influence of the Council of Europe on the development of legal awareness in Ukraine”, which outlined the reasons for the appearance of the human rights movement and gave a list of Ukrainian prisoners of conscience.

In the period from the end of 1976 until his arrest on 6 March 1979, Berdnyk participated in drawing up and signed dozens of letters and Memoranda in defence of human rights activists under arrest or serving sentences. Searches were carried out on several occasions and books, poems, manuscripts and a typewriter removed. At the end of August, Berdnyk, together with other members of the UHG and the Moscow Helsinki Group (MHG), issued Document No. 2 “To the Heads of Government of the Member States of the Conference for Security and Co-operation in Europe (CSCE – now OSCE). New Repressions and a New Phase for the Human Rights Movement in the USSR” calling for the release of all members of Helsinki Groups under arrest.

On 14 October 1977, those members of UHG still at liberty sent an “Appeal” to the Council of Ministers of the Ukrainian SSR calling for the official registration of the Group and for the rights of a legal entity. On 9 November, Berdnyk drew up on behalf of the Group the “Manifesto of the Ukrainian Human Rights Movement”.

On 9 May 1978 Berdnyk wrote an open letter to the UN Human Rights Committee, to Amnesty International, Leonid Brezhnev and declared a hunger strike, demanding the release of the disabled war veteran, M. RUDENKO.

Berdnyk was arrested and charged with “anti-Soviet agitation and propaganda”. He began a hunger strike immediately. It was a full two weeks before his relatives found out that he had been arrested. He was specifically charged with writing and distributing the articles “Svyata Ukraina” [“Holy Ukraine”], “Alternatyvna evolyutsiya” [“An alternative form of evolution”], “Svyato Materi i Dytyny” [“The Festival of the Mother and Child”], the poetic work “Zaklyattya” [“Curse”] (to mark the 325th anniversary of the inclusion of Ukraine into the Russian Empire), as well as with taking part in an “anti-Soviet organization (UHG) and more. During the pre-trial investigation, Berdnyk admitted to “errors”.

From 17-21 December 1979 Berdnyk was tried and sentenced by the Kyiv Regional Court at an off-site hearing in the town of Kaharlyk under Article 62 Part 2 of the Criminal Code of the UkrSSR and Article 70 Part 2 of the Criminal Code of RSFSR (both being “anti-Soviet agitation and propaganda”) to 6 years deprivation of liberty in special regime labour camps and to 3 years exile. He was declared a particularly dangerous repeat offender.

From 16 May 1980 he was held in the special regime labour camp No. VS-389/36­1, in the village of Kuchino, Chusovsk district of the Perm region. From 7 September 1981 to 13 January 1982 he was kept in the detention centre of the KGB in Kyiv for “preventive education”. In February he refused to appear as a witness in the case against M. HORYN, and on 7 September 1982 he was moved to the harsh regime zone VS ­389/35 (Vsekhsvyatskaya).

In summer 1983 he was again brought out for “re-education”. He was pardoned in accordance with a Decree of the Presidium of the Verkhovna Rada of the Ukrainian SSR from 14 March 1984.

On 17 May 1984 a “recanting” article by Berdnyk was published in “Literaturna Ukraina” [“Literary Ukraine”] under the title “Vertayuchys dodomu” [“Coming home”] which stated: “The Helsinki movement is a creation of the CIA”, and about RUDENKO and LUKYANENKO said “if they had had any real courage, they would have long moved away from the road of anti-patriotism and voluntary self-isolation”.

In 1987 Berdnyk founded the civic organization “Noospherny front “Zvyozdny klyuch“ [Noosphere front “Key of the Stars”] the aim of which was “the preservation of the spiritual values of peoples and tribes, gained in the ages of harsh cosmic history, which are being irretrievably lost and undermined in the whirlwind of pseudo-civilization”.

On 16 December 1989 Berdnyk was elected leader of the humanist organization “Ukrainskaya Dukhovnaya Respublika” [“Ukrainian Spiritual Republic”], and published the newspapers “Svyata Ukraina” and “Zhoda” [“Consensus”]. In autumn 1991 he was put forward (but not registered) as candidate for President of Ukraine.

After his release, Berdnyk published about 15 books.

Oles Berdnyk died on 18 March 2003 after a long illness. He lies buried in the village of Hrebeni in the Kyiv region

I. Rapp, V. Ovsiyenko, based on material provided by V. Kipiani