A prominent Ukrainian publicist and literary specialist; one of the intellectual leaders and active participants in the national democratic movement; a former political prisoner

Yevhen Sverstyuk was born into a peasant family. His elder brothers were members of a youth network of the Organization of Ukrainian Nationalists (OUN): one died fighting, the other was repressed.

In 1952 he graduated from the Faculty of Languages and Literature of Lviv University (the department of “Logic and Psychology”), then from 1953 – 1956 was a PhD student of a psychology research institute. From 1956 – 1959 he was a lecturer of Ukrainian Literature in the Poltava Teachers’ Training Institute, then for two periods – from 1959-1960 and 1962-1965 he worked as senior research assistant at a Kyiv  psychology  research institute. Between 1961 and 1962 he was in charge of the prose section of the journal “Vitchyzna” [“Homeland”]. During those years Sverstyuk was dismissed four times for political reasons, and he was not permitted to defend his PhD thesis.  The last dismissal in 1965 was in connection with a talk he gave at a teachers’ conference in Volyn on the subject of aesthetic education.  Sverstyuk said that aesthetic education was already freedom, but that one needed first to learn to tell the truth and not to lie to children. Several members of the audience got quite twitchy, and the question was even raised whether the paper had been given at the instruction of the Central Committee (of the Communist Party). From 1965 until his arrest in 1972 Sverstyuk held the position of executive secretary of the editorial office of “Ukrainsky botanychny zhurnal” [“The Ukrainian botanical journal”].

From the first appearance in 1960 of the Kyiv “Klub tvorchoyi molodi” [“Club for Creative Young People” (CCY)], which became the centre of unofficial cultural and civic life both in Kyiv and throughout Ukraine, Sverstyuk was one of its most active participants, together and in close contact with such prominent figures of Ukrainian culture and art as A. HORSKA, H. Sevruk, L. Semykin, V. SYMONENKO, I. SVITLYCHNY, I. DZIUBA, L. KOSTENKO, I. DRACH, V. STUS, L. TANYUK and others.

One of the most hard-hitting and popular works of Ukrainian samizdat during the 1960s was the anonymous pamphlet “On the trial of Pogruzhalsky”[1], about the fire in the Kyiv Central Scientific Library on 24 May 1964 which destroyed a huge number of works on Ukrainian studies and archival documents.

It turned out later that the article had been written by Sverstyuk together with Ivan SVITLYCHNY and some other figures involved in literature.  Sverstyuk’s unofficial public speeches, in particular, that which he gave at the evening in memory of Vasyl SYMONENKO in 1963, were to become important events in national-cultural life.  The nature of the resistance shown can be seen quite vividly in the open letter (signed by Sverstyuk, Alla HORSKA, Lina KOSTENKO, Ivan DZIUBA and Viktor NEKRASOV to the newspaper “Literaturna Ukraina” [“Literary Ukraine”] in connection with the newspaper’s campaign attacking Viacheslav CHORNOVIL..  Well-known articles by Sverstyuk “Sobor u ryshtovanni” [“The cathedral under scaffolding”], “Ivan Kotliarevsky smietsya” [“Ivan Kotliarevsky laughs”], “Ostannya slyoza” “The final tear”], “Na mamine sviato” [“To mother’s special day”] were widely read in samizdat. “The guiding concept in the publicist works of Sverstyuk is the significance of spirituality in the formation of the individual, nation, society, its unconditional priority over the entire value system of social existence” (Mykhailyna KOTSYUBYNSKA).

Throughout the 1960s Sverstyuk took part in all semi-legal literary evenings, meetings and prohibited gatherings with laying of flowers at the Monument to Taras Shevchenko on 22 May to mark the anniversary of the poet’s remains being carried back from exile in St. Petersburg to Ukraine. In September 1966 Sverstyuk was present at an informal memorial gathering at the site of the massacre of Jews at Babi Yar. On 7 December 1970 Sverstyuk made an impassioned speech at the funeral of Alla HORSKA who had been murdered on 28 November.

On 14 January 1972, during the second wave of arrests of members of the Ukrainian intelligentsia, Sverstyuk was arrested. The investigation into his case dragged on for over a year for all that the case was purely “literary” – the author had signed his works with his own name and there was therefore nothing to investigate.  From 16-24 April 1973 Sverstyuk was tried and sentenced by the Kyiv Regional Court under Article 62 § 1 of the Criminal Code of the Ukrainian SSR (“anti-Soviet agitation and propaganda”) to the maximum term – 7 years labour camp and 5 years exile.  He was charged on the basis of the above-mentioned “anti-Soviet” articles (the main focus of the prosecution being the article “Sobor u rystovanni”), public addresses made to people working in education in 1965 where he had criticized ideological stereotypes and the system of lies in the work of schools, conversations with people he knew, and verbal utterances.  Sverstyuk’s “Final words” at the trial were later circulated in samizdat.

He served his sentence in the Perm political labour camps. In 1974 he signed a letter from political prisoners to the International Red Cross about the fact that “the conditions of confinement in the camps have been specially designed to destroy prisoners’ health”.  In January 1976 he signed a letter in support of Sergei Kovalyov and protesting against political repressions. In November 1977 he gave his support to a letter from political prisoners to the Helsinki Committee of the Commission of the USA Congress asking that the latter come and see on the spot what the conditions were like for political prisoners.  In 1978 Sverstyuk both drew up and signed several letters and declarations to mark the 10th anniversary of the sending of troops into Czechoslovakia, the 60th anniversary of the Decree on the Red Terror (passed on 5 September 1918), with a demand to repeal it, and also on Human Rights Day. In exile (in the settlement of Bogdarin in the Buratiya Autonomous SSR, he worked as a joiner on a geological expedition.

Sverstyuk was released in October 1983. In Kyiv he found work again as a joiner, but lost his job in 1988 after visiting the US embassy which had organized a reception for Soviet dissidents.

From the summer of 1987 Sverstyuk played an active role in the work of the semi-legal Ukrainsky kulturolohychny klub [The Ukrainian Cultural Studies Club] (UCSC). He delivered a lecture on what would have been the fiftieth birthday of Vasyl STUS who had died in a labour camp, and announced that he had passed this to the London Centre of the International PEN-club.

Sverstyuk’s numerous articles and public addresses to the intelligentsia, university and school students on radio and television have contributed to overcoming the inertia of fear in society and to the rebirth of national spiritual values. Remaining aloof from political organizations, Sverstyuk has influenced the formation of the ideology behind the national patriotic movement in Ukraine as a whole and in particular on the spiritual regeneration of the country.

In his paper “Shistdesyatnyky i Zakhid” [“Shestydesyatnyky or Sixties activists and the West”], presented in Urbana-Champaign and Harvard in 1991, Sverstyuk gave the following assessment of the historic changes which had occurred: “The aggressive communist power, rooted in crime and threatening the world, unexpectedly rejected its style of challenges and threats. It drooped, turned 180 degrees and accepted the language of its victims - those tortured and those not yet crushed with their prisoners’ numbers. This was the eternal quiet language of truth, its stream flowing through all history. The communists could not make it wither and were unable to divert its flow with their “truth”. Seemingly they understood that the common language of the world could be only this quiet language of those oppressed and persecuted for the truth which comes from sacred springs”

In 1993 Sversyuk defended his doctoral thesis[2] at the Ukrainian Free University in Munich on the topic “Ukrainian Literature and the Christian Tradition”.

Sverstyuk’s most well-known books are “Sobor u ryshtovanni” (1970), “Bludni syni Ukrainy” [“Ukraine’s Prodigal Sons”] (1993), “Shevchenko i chas” [“Shevchenko and time”] (1996) and “Na svyati nadiyi” [“At the Festival of Hope”] (1999).  He has also published many articles and essays on literary themes, psychology and religion, as well as poems and translations from German, English and Russian.

He was awarded the Shevchenko State Prize in 1995. He was made a full member of the Ukrainian Free Academy of Sciences in the USA in 1996.

Angst, ich bin dich losgeworden [Fear, I have freed myself from your clutches], FRG, 1980.

[1]  The fire was deliberately lit and he article questioned the official version, suggesting that the act of arson was part of a policy to destroy Ukrainian heritage. It would seem that Pogruzhalsky, the man convicted of the crime was, in fact, employed by the KGB.  (translator’s note)

[2]  In Ukraine post-graduate students become Candidates of Philosophy equivalent to PhD.  Some go on to the higher Doctor of Philosophy  (translator’s note) 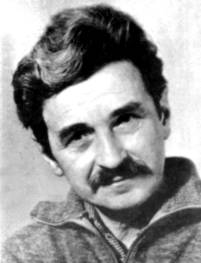