A poet and one of the most prominent and significant figures in Ukrainian literature of the beginning of the 1960s. His works and his early death had an enormous impact on the rise of the national democratic movement in Ukraine.

Vasyl Symonenko was born into a peasant family.  He studied at the Journalism Faculty of Kyiv University from 1952 to 1957 during the years of ideological upheaval and weakening of the grip of fear. He led a literary studio, and had a strong interest in American Literature.  He showed a rare degree of openness and sincerity.  From 1957 he worked in the culture section of the newspaper “Cherkaska Pravda” [“Cherkasy Truth”], and from 1960 was in charge of the propaganda section of the newspaper “Molod Cherkashchyny” [“Cherkasy Region Youth”].

He made his debut as a writer with the book of poems “Tysha i hrim” [“Silence and thunder”] in 1962, which made it clear that a bright talent had appeared among young poets.  Symonenko’s literary milieu included the poets M. Vinhranovsky, I. DRACH and L. KOSTENKO and the literary critics I. DZIUBA, I. SVITLYCHNY and Y. SVERSTYUK.  He had only a year to live (doctors later diagnosed cancer of the kidneys).  It was during that last year, perhaps sensing that the end was near, that he wrote his second book – “Zemne tyazhinnya” [“Earth’s gravity”]. The poems there were quoted, written out (adding what the censor had omitted), learned by heart and compared in the depth of their suffering and sincerity with the poetry of Taras Shevchenko.

Symonenko’s daringly open poetry challenged the entire system of lies and official hypocrisy. The reader could appreciate not only the sincerity, but also and most importantly the poetic energy of his poems and their pure voice, free of the half-truths and half-measures which were cultivated in the literature of socialist realism. The official publication of the book seemed to give official legitimacy to this style. The poet taught his contemporaries to free themselves from their bondage and to honestly write the truth whatever the cost. The Ukrainian people facing the threat of being levelled into the ground, with truth in the noose of legalized lies and official pride, love driven underground and beauty under the mask of blossoming prosperity – all of this can be heard in Symonenko’s poetry, as a cry and solemn call to maintain one’s human face and living spirit, to affirm the right to live.

The fullest collection of Symonenko’s works with a preface by Ivan Koshelivtsa was published abroad under the title “Bereh chekan” [“Shore of anticipation”] in Munich (1963). A book entitled “Vasyl Symonenko” was published in Russian by the publishing company “Molodaya gvardiya” in the series “Library of selected poems” in 1968 with a translation by Lev Smirnov. In 1964 two children’s books were published: “Tsar Plaksiy ta Loskoton” [“Tsar Cry-baby and Loskoton”] and “Podorozh v krayiny Navpaky” (“Journey to Vice Versa Land”), as well as a collection of short stories “Vyno z troyand” [“Wine from Roses”].  His most comprehensive book “Poeziyi” [“Poetry”)] (1966) which had been hacked by the censor with a number of poems deliberately distorted became hard to come by.  After that publication Symonenko’s works were passed by in silence as a “twisted manifestation of national sentiments”.

The diary kept by Symonenko during the last year of his life was circulated in samizdat under the title “Okraitsy dumok. Shchodennyk” [“Fragments of thought. Diary”], as well as a collection of his poems without censorship with a preface by I. SVITLYCHNY.

During the second wave of arrests in 1972, the authorities (in finding cause for their arrests) appropriately “assessed” Vasyl Symonenko, and in the words of I. SVITLYCHNY, “they launched a case as well” against the dead poet. 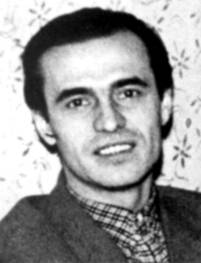