Shabatura was born into a peasant family and was very small when her father was killed in the War. In 1961 she finished an art college and then in 1967 graduated from the Lviv Art Institute having specialized in the applied arts. She was a member of the Union of Artists of Ukraine. Her embroidery was exhibited on many occasions and received acclaim, and there was an entry on her work in volume six of “Istoriya mystetsva Ukrainy” [“The History of Ukrainian Art”].

Shabatura participated in the activities of the Lviv branch of ‘Klub tvorchoyi molodi’ [‘Club for Creative Young People’] “Prolisok” [Snowdrop] and circulated samizdat material. In 1970, together with a group of Lviv writers and artists, she spoke out in support of V. MOROZ and tried to get permission to be present at his trial.

She was arrested during the second wave of arrests – the ‘pogrom’ of the Ukrainian intelligentsia which began on 12 January 1972 and accused of carrying out ‘anti-Soviet agitation and propaganda’.  The specific charges were connected with her circulating typed out copies of the collections of poems of V. STUS “Vesely tsvyntar” [“The Merry graveyard”] and of M. Kholodny “Kryk z mohyly” [“Cry from the grave”], as well as of the article by V. MOROZ “Sered snihiv” [“Amid the snow”].  She was tried from 12-13 July 1972 and sentenced under Article 62 Part 1 of the Criminal Code of the Ukrainian SSR  to 5 years harsh regime labour camp and 3 years exile.

She served her sentence in the women’s camp No. ZhKh-385/3 in the settlement of Barashevo, Tengushevsk district (the Mordovian political labour camps). There she took an active part in protest actions and hunger strikes, demanding political prisoner status and an amnesty for all prisoners of conscience.  She was punished for this by being thrown into the punishment solitary confinement or PKT [prison-type cells], and calculates that in all she spent 115 days in solitary confinement and a year and a half in PKT.

She was not allowed to paint which led to the women political prisoners declaring a hunger strike in protest. It was only in 1974 that an officer of the Lviv KGB brought a painter’s case and paints, pencils, brushes and paper, after which the camp administration made no more attempts to stop her.

At the end of 1975 Shabatura was taken to Lviv for “re-education”. On 10 December, Human Rights Day, as in previous years, she declared a hunger strike in protest at violations of human rights in the USSR. Despite intense pressure from an officer of the Lviv KGB, Shabatura did not abandon her strike, and was warned that she would ‘live to regret it’.

Immediately following her return to the camp, directly at the guard point, Shabatura was officially informed that 150 of her paintings, taken away before her departure, had been burned either as “abstract works” or where the camp was depicted.  In protest at this in February 1976 she refused to work. She was initially thrown into the solitary confinement cell, then in April she was put in a prison-type cell for six months.  The head of the camp cynically told her: “We don’t shoot people anymore, but we still have other ways of making sure that you don’t leave this camp alive”.  Shabatura declared a hunger strike which lasted 12 days. A wave of protest swept through the Mordovian political labour camps at the destruction of intellectual property (at the same time the authorities had informed of the destruction of N. SVITLYCHNA’s embroidery and of poems by I. KALYNETS and V. STUS).

In 1976 Shabatura was allowed a visit from her mother for one day. The room was bugged and when their conversation was not audible, the head of the Mordovian KGB himself, Lieutenant Drotenko, burst into the visiting room and in the ensuing confrontation ripped pen and paper where the text of the conversation was written out of Shabatura’s hand.  Drotenko said to her mother that her daughter was beyond reform and that people like her should be shot. He claimed that her works had not been destroyed, only those where prisoners were depicted, or where there were “abstract sketches of the camp”.  Drotenko flung several bookplates on the floor and trampled them, yelling that they were intended for State criminal doing time, and that there were no bookplates for writers, artists and children.

After this visit, Shabatura again protested against the destruction of her works by refusing to do camp slave labour, and was once again punished with periods in solitary confinement and prison-type cells.

On 9 January 1977 Shabatura was taken from solitary confinement in Yavasa to her place of exile in the village of Makushyno in the Kurgansk region. There she worked in an artists’ studio at the House of Culture where she designed graphic propaganda material. She also sent statements about the injustice of the Soviet judicial system and about the crushing of the Ukrainian Helsinki Group (UHG), most of whose members were in the camps, and expressing her confidence that the UHG would survive.
In February 1979 a group of political prisoners and those in exile, including Shabatura, supported the UHG by announcing their membership of it.  Since Shabatura was not considered to have “made progress in the direction of reform”, after her term of exile ended she was ordered to go directly to Lviv, stopping nowhere along the way, and place herself under administrative surveillance. She arrived home on 2 December 1979. The police refused to register her in her own flat (part of a cooperative), where her ill mother, a War widow, was living but Shabatura refused point-blank to move. She was held under administrative surveillance for a year.

At the end of the 1980s Shabatura became actively involved in the national and political revival in Ukraine. She was an active member of the Lviv chapter of Memorial and of the Narodny Rukh Ukrainy [The Popular Movement of Ukraine] (Rukh), and took part in the struggle to re-establish the position of the persecuted Ukrainian Greek-Catholic Church (UGCC).  From 1990 – 1995 she was a Deputy of the Lviv City Council, and from 1991 the chairwoman of the Mary Mother of God Charity Association.
She worked as an artist in the textile industry. In 1994 because of her rehabilitated status, she was offered an artist’s studio on preferential terms.

I. Rapp, agreed with S. Shabatura 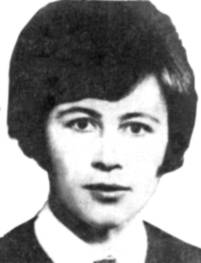