As a small boy In 1933  during Holodomor [the Famine], his family managed to flee Ukraine for the Soviet Far East  In 1942 Zalyvakha left to study – first to Irkutsk, then Samarkand and Leningrad. He spent 22 years under State roofs, first during the period of student hostels, then in labour camps.

Zalyvakha tells how profound an impression was made on him by the pride in their national roots in their art he saw in Repin Institute students from other countries – Czechs, Albanians, Armenians and others.

Panas was neither in the Pioneers nor the Komsomol and was totally indifferent to politics. His disregard led to his being expelled from the second year of his institute studies for “behaviour unworthy of a Soviet student”, this being that with other students, he had failed to attend a meeting with a candidate for deputy. He gained a good reference working on a building site, and was reinstated at the institute in 1955, graduating in 1960.

In 1957 Zalyvakha was on study practice in the city of Kosiv in the Ivano-Frankivsk region where he first came into close contact with Ukraine: its language, ethnography, spiritual life. This led to fundamental changes in its world view. He began reading Ukrainian books, learning the language and the history of Ukraine. Zalyvakha himself writes that he was never politically-minded; he simply wanted to be Ukrainian, know Ukrainian history, its national art, to be a citizen of Ukraine. He travelled a lot around the North, was also in Ukraine.

After graduating from the institute, he was sent to work in Tyumen, to an artist fund. In 1961 in Tyumen he had his own personal exhibition and also took part in the exhibition of the zone in Novosibirsk.

In December 1961 Zalyvakha finally moved to Ukraine, entered the Ivano-Frankivsk regional association of artists. In May 1962 his personal exhibition began.  It was to last however only a week before being closed by Party authorities because “the works exhibited do not show bright, optimistic heroes participating in the creating of our glorious future”.

In autumn 1962, Zalyvakha got to know the cultural intelligentsia of Kyiv better. He was a frequent guest at the “Klub tvorchoyi molodi” [“Club for Creative Young People”..  He was enormously influenced by Ivan SVITLYCHNY, Ivan DZIUBA, Yevhen SVERSTYUK, Mykhailyna KOTSYUBINSKA, Ivan DRACH, the brothers Bohdan and Mykhailo HORYN, Viacheslav CHORNOVIL, Olena ANTONIV and Veniamin Kushnir. As Zalyvakha puts it, it was thanks to them that he understood the real nature of the “Moscow empire”.

In 1964, for the anniversary of Taras Shevchenko’s birth, he took part, together with A. HORSKA, L. Semykina, H. Zubchenko and H. Sevruk in the creation of a stained-glass window at Kyiv University. However even before the commission had the chance to accept the window, it was destroyed on the instructions of the Party authorities.

After this, the KGB began actively watching Zalyvakha.  He did not have his own studio and lived hand to mouth. He had just received a one-room flat when he was arrested on 27 September 1965, in the first wave of arrests among the Ukrainian intelligentsia.

In September 1966 at a court hearing behind closed doors, Zalyvakha was sentenced to 5 years harsh regime labour camp under Article 62 § 1 (“Anti-Soviet agitation and propaganda”) of the Criminal Code of the Ukrainian SSSR.  He served his sentence in the Mordovian political labour camps, worked as a loader, then stoker. He was banned from painting. As a result of numerous protests by Zalyvakha and other prisoners, they were invited to make up camp slogans, for example, “To liberty with a clear conscience!”  Zalyvakha took up small graphic work – book-plates, postcards. All such works were confiscated during searches, and according to the Administration, destroyed. More than 200 of his works were in this way lost.

After his release, Zalyvakha remained for a year and a half under administrative surveillance. The Artist fund refused to give him work. He earned a living as a draftsman in an amenity complex, and, of course, continued to paint. Two searches were carried out of his home.

From 1971 to the beginning of the 1980s he worked in book design. Together with Sophia Karaffa-Korbut, he created a number of projects in the publishing houses “Veselka” and “Kamenyar”. He worked very productively in lathe art and developed rapidly in his associative understanding of images. In the 1980s he experimented with lathe and instant plastic arts. He created design plans for interiors of cafes and restaurants.

In 1987 he was one of the initiators in creating a Ukrainian Association for the Independent Creative Intelligentsia. He designed the cover for the journal “Ukrainsky visnyk” [“Ukrainian Herald”]. In 1988 after a ban of many years, an exhibition of his work was held in Ivano-Frankivsk and Lviv, then in 1989 in the Taras Shevchenko Museum in Kyiv, and later in Toronto, London and New York.

A talented, independent artist, and a man of high moral standard, Zalyvakha was universally recognised as an outstanding representative of Ukrainian culture.

He was the 1999 Laureate of the Vasyl Stus Award, and received the Shevchenko State Award in 1995.

Opanas Zalyvakha lived in his last years in Ivano-Frankivsk where he died at the age of 82 on 24 April 2007. 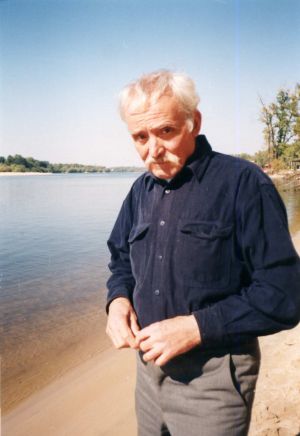