Murzenko’s father was killed in the War. In 1952 Murzhenko entered the Suvorov Military College which he was to finish in 1961. He studied at the Faculty of International Affairs of the Moscow Financial Institute and then worked as an inspector of the district financial department of the Leningradsky district in Moscow.

Murzhenko was arrested on 3 March 1962 on a charge of carrying out “anti-Soviet agitation and propaganda”, and of creating, together with Y. Fyodorov, S. Kyzmin, V. Balashov and Kryuchkov, an illegal organization “Soyuz svobody rozumu” [“Union for Freedom of the Mind”] and distributing leaflets with the “Manifesto” of this Union.

Murzhenko was released on 2 March 1970 and worked as a loader at the Lozova station. With great difficulty as a former political prisoner, Murzhenko succeeded in entering the external department of the Kyiv Trade Institute.

He was again arrested on 15 June 1970 on the charge of attempting to hijack a plane. The others accused in this case were E. Kuznetsov, M. Dymshyts, S. and I. Zalmanson, I. Mendelevych, Y. Fyodorov, A. Altman, L. Zhnokh, B. Lenson and M. Bodnya. The trial was held in Leningrad from 15-24 December 1970. Murzhenko was charged under Article 64 Paragraph “a” (“State treason”), Article 15 (“responsibility for preparing a crime and for attempting to carry out a crime”), Article 70 (“anti-Soviet agitation and propaganda”), Article 93-1 (“theft of State property on a particularly large scale”).

The accused were indeed planning to hijack the 12-person passenger plane AN-2 which flew on the route “Leningrad – Priozersk”, in order to use it to escape to Sweden, and then to get to Israel. At the trial, Murzhenko showed that the main reason for his involvement in the hijack was his lack of direction in his personal life and lack of experience. “My life has been 8 years of the Suvorov college, 6 years of camps for political prisoners and only 2 years of liberty”. Murzenko only admitted partial guilt, and in his final words stated: “I never had any criminal purpose. I would ask the court to pass a period of punishment which would leave me some home for happiness, for my future and the future of my family”.  He also asked the court to show mercy to E. Kuznetsov and M. Dymshyts. The court sentenced the latter two men to death, and the others to periods from 4 to 15 years.  Murzhenko was sentenced to 14 years deprivation of liberty, being designated a particularly dangerous repeat offender. In view of the intense interest in the world over the “Leningrad case”, the Panel of Judges of the Supreme Court of the USSR from 30-31 December 1970 commuted the death sentence to 15 years imprisonment, decreased the sentences of three others, but left Murzenko’s sentence unchanged.

In March 1971 Murzenko arrived at the special regime camp № 10 (Sosnovka) in Mordovia. In December permission was refused for a meeting with his wife (“non-fulfilment of production quota over the last 2 days”), in response to which on 18 December he declared a hunger strike which he maintained for 10 days. In spring 1974 he was in the hospital of camp ZhKh ­385/3 (Barashevo), where, together with K. Lyubarsky, he took part in drawing up a policy for demanding political prisoner status. In February 1977 E. Kuznetsov, B. REBRYK,  M. OSADCHY and Murzhenko held a 5-day hunger strike in protest at the harshening of the regime.  This action was supported in other political penal zones in Mordovia by a one-day hunger strike.  Murzhenko was subjected to constant persecution from the administration – in the 12 years spent in the camps he received only 2 parcels. He was not allowed visits, or correspondence.

Murzhenko’s family in Kyiv was also constantly persecuted. His wife was dismissed from her factory in 1972, and was only able with great difficulty to find work as an assistant in a kindergarten. On 29 March 1977 a policeman, together with 4 unidentified individuals in civilian clothes unceremoniously detained Lyubov Murzenko, and then produced falsified documents to accuse her of “insulting a policeman”. On the same day, a judge of the Darnytsky People’s Court, Momot arrested her for 10 days (she had a 9-year-old daughter).  She went on hunger strike and on 20 April formally appealed the actions of the judge of the People’s Court. In 1978 she was dismissed from the kindergarten.  In March 1979 she was summoned to the school where her elder daughter was studying. KGB officers, in the presence of the teachers, warned her that if she continued her “incorrect behaviour” (meeting with dissidents, contact with people abroad) her children would be taken away from her.  From 1979-1980 the authorities prevented Murzhenko’s family from emigrating to Israel.

Murzenko’s wife made repeated demands for her husband to receive immediate hospital treatment (he suffered from several chronic illnesses), however the medical department of the Mordovian camps replied with formal excuses about medical examinations and his being “practically healthy”.

At the beginning of 1980, Murzhenko declared his status as a political prisoner (he refused to do forced labour and to wear the sewed name-tag with his name).

On 22 November 1980 Lyubov made an appeal to the General Secretary of the Central Committee of the CPSS to pardon her husband.

“Refusenik” human rights activists held protest actions in support of the “plane” trial prisoners.  On the request of A. Sakharov and Y. Bonner, their case was taken up by a French lawyer.

On 6 June 1981 the Moscow Helsinki Group (MHG) issued document № 169 “The lives of the prisoners Yury Fyodorov and Aleksei Murzhenko are in danger”, which suggested the need to review the case in view of the addition in 1973 to the Criminal Code of the Russian SSR of Article 213 § 2 (“Hijacking an aeroplane”) which established the sentence for this crime as deprivation of liberty for a period from 3 to 10 years, this meaning that the “plane” trial prisoners had already served a period longer than the maximum now envisaged.

On 14 June 1982 Moscow human rights activists Y. Bonner, I. Milgrom, I. Nudel, N. Khosin addressed an appeal to Brezhnev to show mercy and compassion with regard to the men convicted and their families, and to pardon the last two “plane” trial prisoners.

Murzhenko was released two weeks before the end of his sentence, on 2 June 1984, in Kyiv, and immediately placed under administrative surveillance.

In June 1985 Murzhenko was arrested on a charge of “persistent violation of the rules of administrative surveillance” (on one occasion he did not report to the law enforcement bodies). He was sentenced in September 1985 by the Kyiv City Court to 2 years heightened regime labour camp. His appeal against the conviction was rejected.

He served his sentence in the penal zone MKh­324/58 for particularly dangerous repeat offenders in Izyaslav, Khmelnytsky region.

In May 1987 he was told he could submit documents for emigration from the USSR for his whole family. In October 1987 he was released and the family left for the USA, where they lived in New York.

Oleksiy Murzhenko died at the end of 1999.

V. Ovsiyenko, based on material from Vakhtang Kipyani and the Perm branch of “Memorial” 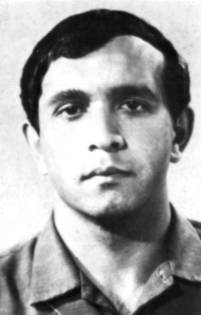