Educationalist, from the milieu of the Shestydesyatnyky [Sixties activists], mother of Valery Marchenko

Nina Marchenko was born into a peasant family. Her father, as a literate activist was sent to study at the ‘Institute of Red Professorship’ in Kharkiv, where Nina and her mother joined him. In the autumn of that year (1934), the capital was transferred to Kyiv and the whole family – her parents and elder sister all moved to Kyiv. She remembers 1937 when in their block at night students of the institute were arrested. Their rooms were sealed, their families driven out into the street and people were watched to make sure that they didn’t speak to them.  At that time her father survived through a miracle. In 1937 he was appointed deputy head of the department of history of feudalism of the newly created Institute of History of the Academy of Sciences of the Ukrainian SSR.  In autumn 1939, Mykhailo Marchenko became Rector of the Ivan Franko University in Lviv, where he carried out a policy of encouraging Ukrainian language and culture.  A year spent in these new conditions, and contact with prominent representatives of the Ukrainian intelligentsia, had  an influence on the academic’s worldview. The summer holidays in Western Ukraine made an indelible impression on ‘pioneer’ Nina, with its contact in Ukrainian, high level of culture of everyday life and well-behaved children.

On the first night of the War the NKVD carried out mass arrests of representatives of the Ukrainian intelligentsia. Mykhailo Marchenko was among those arrested. He was taken to Kharkiv on foot. He was held in the Novosibirsk prison without trial until February 1944.  There on the basis of denunciations from two cellmates, he was charged with Ukrainian nationalism. He was saved by the fact that far inside Russia during the War Ukrainian nationalism was not seen as a burning issue.

His family remained in occupied Kyiv. Nina only occasionally attended school but read a lot of Ukrainian literature and newspapers. She spent the summers in Hatne.

In November 1943 the Soviet Army entered Kyiv. Nina returned to school where they tried unsuccessfully to enrol her in the Komsomol. In spring 1944 a letter arrived from her father saying that he had been rehabilitated. He returned to Kyiv in summer 1945, and began lecturing in the teachers’ training institute.  He was appointed pro-rector in charge of academic work, presented a course on Ukrainian History which was later to be included in the general course of the history of the USSR.  He had difficulty adapting after the repression he had been subjected to. He was reinstated in the Party, however in 1956 at a meeting about the denunciation of the cult of Stalin, he made a speech in which he accused the Central Committee of the Communist Party both of the Soviet Union and of Ukrainian of mass-scale repression, and was again in disgrace. From 1957 to 1984 he was a professor of Kyiv State University.

Nina Marchenko married in 1946, and on 16 September 1947 her son, Valery МARCHENKO, was born. In 1950 she entered the Faculty of Ukrainian Language and Literature of the Teachers’ Institute, then in 1956 she graduated as an external student from the Kyiv Teachers’ Training Institute.  From 1952 to 1961 she taught in a secondary school. She observed how the general sphere in which the Ukrainian language was used was narrowing, and from her own experience knew how the authorities denigrated Ukrainians. From 1960, she was a member of the Communist Party, but after the first arrest of her son in 1973 she left her party ticket in the district committee of the Party.

In 1961 Marchenko became a junior research assistant in the department of methodology of language learning of the Ukrainian Pedagogical Research Institute (UPRI), where she was one of the authors of a textbook for schools. In 1968 she defended her PhD thesis on the methodology of teaching the Ukrainian language with the title: “The Legacy and Prospects for teaching lessons of Ukrainian language in secondary school”.  She prepared a methodological textbook for print.  From 1967, Marchenko was a senior lecturer in the laboratory of television educational broadcasts of Kyiv Teachers’ Training Institute. It was difficult to keep the lessons free of excessive ideology, and she therefore returned in 1976 to the department of department of methodology of language learning in UPRI where she worked until she retired in 1984.

Marchenko read the poetry and prose of the Shestydesyatnyky [Sixties activists] in samizdat, visited literary evenings and exhibitions of dissident artists, and knew many dissidents.

Her son developed as a citizen under the influence of his mother, while his mother was to develop too under his influence.

Valery МARCHENKO was arrested on 25 June 1973.  His unpublished articles “Kyivsky dialoh” [“Kyiv dialogue”], “Za paravanom ideinosti” [“Behind the screen of idealism”], “Strashny yakis tyahar” [“Some kind of terrible burden”] were labelled anti-Soviet and nationalistic. With no consideration taken of his serious illness (nephritis from the age of 16), he was sentenced to 6 years harsh regime labour camps and 2 years exile.

This marked the beginning of Marchenko’s battle to save her son’s life. The investigation, trial, the cold-blooded, standard verbal and written responses to appeals, applications and protests demonstrated the lawlessness and brutality of the authorities and their illegitimate activities.  Her son’s letters, the trips to the Ural to where he was imprisoned gave evidence of the torture through hunger, lack of medical assistance, of the terrible living conditions of the prisoners, of the overcrowded labour camps. She was particularly appalled by the endless rows of under-age prisoners. Nina Marchenko wrote numerous letters and appeals in defence of her son, passed on camp information to make it more widely known, sent parcels, books, etc to those political prisoners who would otherwise have received nothing.

In July 1976 a search was made of the visitors’ room (in camp VS-389/36, village of Kuchino, Perm region), however the guards did not find the texts with information which Valery had prepared for his mother to take out of the zone. The flow of information continued.

In August 1977 Valery МARCHENKO was taken to Kyiv “for re-educating”.  Prompted by the KGB, Nina Marchenko suggested that her son write a letter of recantation. He replied that he loved her too much to stand before her a moral cripple.

Nina Marchenko fought to save her son’s life, yet he had chosen honour, truth and justice above all else. It was his deep faith in God that helped to develop his firm spiritual qualities and it was this faith that he passed on to his mother. She understood, believed, and this made the actions and aspirations of her son clearer and closer to her.

In May 1981, Valery returned to Kyiv. He was again subjected to persecution and was unable to find work. For sending documents abroad, including one from the Ministry of Education concerning intensification of the policy of Russification, he was again arrested on 21 October 1983. On 13 March 1984, despite his grave medical condition, he was sentenced to 10 years special regime labour camp and 5 years exile, being designated a particularly dangerous repeat offender.

Aware of the drastic deterioration in her son’s health, Nina Marchenko took appeals, applications and letters of protest to the regional medical department, to the head of the medical department of the Ministry of Internal Affairs (MIA) of the USSR, Romanov, in Moscow. She sent telegrams to the General Secretary of the Central Committee of the CPSS, Chernenko, to the Minister of the MIA, Shchelokov, to Romanov, pleading that her son be transferred to the Leningrad I. Gaaz Prison Hospital.  Ignoring all prohibitions, she sent copies of these appeals to her friends, informing the world about the torture which, on the instructions of the KGB, was being inflicted upon her son and his mother.  Many organizations in other countries, as well as journalists and lawyers, spoke out in support of Valery МARCHENKO.  Pope John Paul II called for his release, as did US congressmen. Radio stations reported to the world community on his condition and demanded his release.

Towards the end of October, Valery МARCHENKO was formally released from the camps due to his state of health, however he continued to be held in the Leningrad I. Gaaz Prison Hospital, and his mother’s demand that the ruling of the medical department of the MIA USSR be followed and that her son be released was ignored.  Nina Marchenko believes that her son died on 5 October 1984 (the documents claim the seventh).

Nina Marchenko buried her son in the family grave in the village of Hadne.

All her life, Nina Marchenko has kept her son’s memory alive and has always called him her teacher. She prepared a book with letters and articles he wrote, as well as a collection of his translations and unpublished academic works. 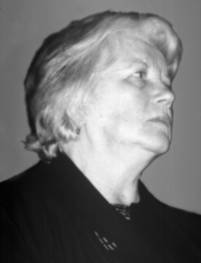