Kyrychenko’s parents were from peasant families. Her father was reported missing in action at the front in 1941. Her mother was a teacher, and her closest relatives – lecturers in institutes. In their Ukrainian-speaking milieu, in an atmosphere where moral altruism was espoused and communist ideals believed in, Kyrychenko’s personality developed.

In 1952 she finished secondary school, and in 1957 she graduated from the Language and Literature Faculty of Kyiv University. Before completing university, she began working at the Institute of Literature of the Scientific Academy of the Ukrainian SSR. She was involved in editing the journal “Radyanske literaturoznavstvo” [“Soviet Literary Studies”] under the leadership of the Chief Editor of the journal L. Kovalenko and the journal’s Executive Secretary, I. SVITLYCHNY who were the first nationally orientated Ukrainians that she had met and who became not only friends, but also her teachers. It was here that in 1963 she met Vasyl STUS and Yury BADZIO, her friendship with whom was to determine her subsequent spiritual evolution and fate. In May 1964 she married Y. BADZIO who warned his wife-to-be before the marriage that he could not guarantee more than three years of peaceful life because of his involvement in the national democratic movement. He was soon driven out of the Institute. On 4 September 1965 the couple took part in the protest action at the Preview showing of the film “Shadows of forgotten ancestors” in response to the arrest of members of the Ukrainian intelligentsia. In 1969 she began working at the Institute of Philosophy. During the years when Ukrainian samizdat was becoming more active (1966 — 1971), Kyrychenko took part in a collective translation into Russian of the I. DZIUBA’s work “Internationalism or Russification?”, and in reproducing and circulating Ukrainian and Russian samizdat

After the arrest in 1972 of N. SVITLYCHNA, Kyrychenko addressed a letter to the First Secretary of the Central Committee of the Communist Party of Ukraine demanding that the two-year-old Yarema Svitlychny, taken away “with no indication where” from a crèche on his mother’s arrest, be returned to relatives. In response, Kyrychenko was dismissed from the Institute of Philosophy “on account of professional unsuitability”. From then on she was to be periodically unemployed until the end of her working career. She worked for a while as a proof-reader in a publishing company, in the centre of pharmaceutical information. In the meantime the police threatened to charge her with “parasitism”. During a search of the Badzio home carried out on 3-4 February 1979, “the authorities” removed the second version of Y. BADZIO’s manuscript “Pravo zhyty” [“The right to live”] (the first had been stolen from the flat of a friend in December 1977) and its miniature copy which Kyrychenko had herself produced. Two months later her husband was arrested. Kyrychenko was again dismissed from her job. In May 1979 she passed to the West her “Open letter” with a biography of Y. BADZIO and a brief account of his work which had been published in the Ukrainian samizdat, as well as original copies of two of his open letters which had not been discovered during the search. These were read out several times on Radio “Svoboda” [Radio “Liberty”].

Through all the following years, Kyrychenko’s life was full of interrogations (not only over her husband’s case), searches, threats of arrest. “Your case is being postponed by the humane Soviet regime until your daughter turns of age. We hope you will realize that and see sense”, - she was to hear many a time in various KGB offices. On 5 January 1980 Kyrychenko wrote an appeal to the International Association of Lawyers asking them to help obtain the release of Y. BADZIO and describing his trial. She perceived her main task as being to make information about political repression in Ukraine more widespread, to pass to the West uncensored texts of documents. She established contacts with dissidents of the Baltic States, Moscow, the Caucuses, with the wives of political prisoners from different labour camps, psychiatric hospitals and exile. In spring of 1980 she brought out after a visit to her husband new poems by Mykola RUDENKO. Shortly before that (in January 1980) she had passed to the USA a manuscript of the collection of poems by V. STUS “Palympsesty”, she distributed “dissident” information gathered in Ukraine.

On 9 December 1980 the Moskovsky District Court in Kyiv sentenced Kyrychenko to three months corrective labour for her refusal to testify at a new trial of V. STUS, where she flung at the judges the following words: “I will testify at a trial where Vasyl sits in your place, and you in the defendant’s chair”. Between a few days and several months – longer than that she was never able to stay at any one job, even jobs at the absolute bottom of the social scale, like delivering the post, being a cleaner, a worker in a cardboard factory, a nanny to the child of neighbours. The police were constantly “summoning” her to (show) “trials of the community”, commissions of old Bolsheviks under ZHEK (the municipal housing office) for “parasitism”, “anti-social behaviour”. In May 1982 Kyrychenko wrote an Appeal to international women’s organizations asking them to help save her husband from possible death. In protest at the latest refusal to allow a meeting with his wife, Y. BADZIO had threatened to declare a protest hunger strike to the death. Kyrychenko feared that in specifically this way the authorities were trying to bring about her husband’s death and therefore called on these women’s organizations to help. The peak of the persecutions came in 1983, the year of Andropov. At Christmas there was an attack on Kyrychenko’s family in Lviv; a campaign of blackmail over the phone lasting many months was waged; a libellous article appeared in the newspaper “Vecherniy Kyiv” [“Evening Kyiv”] with the title “A lady with ambitions” (10.02.83); a demand was put to her student son that he denounce his parents which ended with his being expelled from the Komsomol; her daughter who was still at school was called to the Head’s office where teachers demanded that she “clearly establish which side of the barricades she was on: whether she was with the entire Soviet people, or with her anti-Soviet parents”; the latest refusal to let her visit her husband. On 20 April 1983 Kyrychenko announced an indefinite hunger strike in protest at the total persecution of her family (she announced this in a telegram to Yury Andropov). On the fourteenth day of her hunger strike she received a telegram from the camp administration informing her that a meeting with her husband would be allowed (a one day meeting after not having seen each other for three years); the rector withdrew her son’s expulsion from the institute.

On 5 August 1985 during another search of Kyrychenko’s flat, the KGB officers found and took away all the “camp archive” of Y. BADZIO. It became clear, that like many other Ukrainian political prisoners, there were plans to “pin” a new “case” on him. However Gorbachev’s “perestroika” got in the way of these plans

On 4 June 1986, several days after Y. BADZIO arrived at his place of exile (Khandyga, Yakutiya), he was joined by his wife and daughter (his son was in the army). From the very first day and for all three years, the local KGB tried everything to “squeeze” the wife of a political exile out of the settlement. She was refused registration, fired from her work even as a school cleaner, or cloakroom attendant. In the 10 years of her husband’s imprisonment, Kyrychenko was dismissed from her job 11 times.

On 7 December 1988, from the UN rostrum in Geneva, Mikhail Gorbachev declared that there were no political prisoners in the USSR. On 9 December the local prosecutor informed BADZIO that he was free. In January 1988 the couple returned to Kyiv and immersed themselves in a whirl of perestroika-linked processes and of work for national regeneration. Kyrychenko worked in the organizational Committee of the Democratic Party of Ukraine (DPU). She worked in the Secretariat of the party. At the end of 1992 Kyrychenko, together with her husband, published the first issue of the newspaper “Democrat” – the official publication of the party.

In 1993, Kyrychenko suffered a severe stroke and became an invalid with first group disability status. 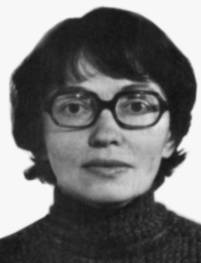