Escaping from famine, Kontsevych’s family in 1947 moved to Zhytomyr. His father, covering the windows, secretly earned extra money on his sewing machine for which he was persecuted as a “private business” – his son remembered the search carried out in 1949. He also experienced himself the contempt of the “city” Russian-speaking children of his age to his “village” language. This was to be the basis for the formation of his national consciousness.

In 1952 Yevhen, then 9 years old, diving into a river, severely damaged his spine. From that time he was unable to walk, and has always had first group disability status. It was only with incredible effort that the young lad held on to life and found his place in it.

He was not planning to become a writer, but fate caused him to meet with Vasylko Khomychevsky, the son of the brilliant translator of ancient literature, Boris Ten, with the brothers Valery and Anatoly Shevchuk, and in 1963 with I. SVITLYCHNY, and he found a whole world of literature opening before him. He first began writing at this time. His stories were published in the newspaper “Literaturna Ukraina” [“Literary Ukraine”], in the journals “Vitchyzna” [“Homeland”], “Dnipro” [“Dniepr”], “Ukraina” and others.

From 1963 С 1963 Kontsevych studied in the external section of the Zhytomyr Teacher’s Training Institute however did not finish his studies. After the publication in 1964 of his collection of stories “Dvi kryntsi” [“Two wells”] he was accepted into the Ukrainian Union of Writers.

Local Party officials wanted to make Kontsevych into some kind of “Pavko Korchagin”, the hero of the well-known novel by N. Ostrovsky “How the steel was tempered”, which all Soviet school children had been brought up on (where the hero of the novel, like the writer, was blind and paralysed). Pioneers and pensioners began visiting him. The secretary of the regional committee on ideology herself pushed for him to join the Party. He refused as he was drawn to people with quite different leanings.

People who later became known as the Shestydesyatnyky [Sixties activists] also came to Zhytomyr, to 12 Druhy Shevchenkivsk provulok. For his thirtieth birthday, on 5 June 1965, his guests included A. HORSKA, the SVITLYCHNY family - Ivan, Leonida and Nadiya, Y. SVERSTYUK, V. CHORNOVIL, M. PLAKHOTNYUK, I. Zhylenko, M. Huts, H. Vozna-Kushnir, V. Tsymbal, B. Mamaisur and others. They chatted, sang, told jokes, and Yevhen was happy. A former neighbour who had made it into the nomenklatura came over to look at an album in which Kontsevych after his friends left had discovered a bugging device, and deactivated it for him. The KGB was already preparing for the August arrests of 1965. They arrived to search his home…. The head of the regional department of the KGB himself together with his henchmen demanded that the bugging device be handed over and that all be kept in secret, and tried to persuade Kontsevych to work for them. Kontsevych emphatically refused and the shameful incident became common knowledge throughout dissident Ukraine. Foreign radio stations also reported it. The same KGB colonel wanted Kontsevych to make a public statement in the press against the foreign publications about this “gift” for his birthday. Kontsevych once again refused.

On 18 April 1982 a search was once again made of Kontsevych’s home in connection with the second wave of arrests: they took away 17 documents of samizdat, a large number of manuscripts, letters, a typewriter and other things. “If that man lying inside here could stand up, he still wouldn’t be walking freely. He’d be inside … “ one Zhytomyr KGB officer said openly.

The Zhytomyr Writers’ Organization tried twice to have Kontsevych excluded from membership of the Union of Writers, however the response of the Party bosses above was clear: “Don’t make him into a great martyr”. Kontsevych’s works stopped being published. He was surrounded on all sides by informers.

The interference continued up until the middle of the 80s. In 1985 a second collection of Kontsevych’s stories was published called “Iduchy vulytseyu” [“Walking along the street”]. His books of translations from Polish and Russian also came out.

Kontsevych greeted the national revival of the end of the 80s – beginning of the 90s with optimism. While remaining removed from political organizations, he nonetheless exerts an influence on the national, cultural, literary and political life in Zhytomyr, and on the spiritual renewal of Ukraine. He is highly respected by the Ukrainian intelligentsia.

“Yevhen Kontsevych is in his way a symbol and legend for this generation – the generation of the Shestydesyatnyky. He is an amazing man who always inspired everybody. It wasn’t, as might have seem, that he needed to be supported – he supported everybody and gave them some of his energy…. (I. DZIUBA).

“He carries himself as though he had no hardness or illness, but simple preferred the style of meeting guests lying down”. (V. Shevchuk).

Kontsevych became the laureate of the Ivan Ohyenko All-Ukrainian prize in the field of literature and the arts (1999). He is a member of the All-Ukrainian Association for political prisoners and victims of repression. 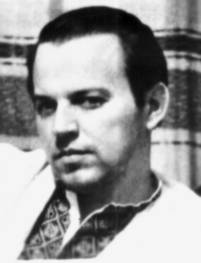