Born into a peasant family, in 1968, on leaving school, Hrynkiv went to the youth construction projects in Eastern Ukraine. He worked as a mechanic in Dnipropetrovsk, and was the secretary of a Komsomol organization for a collective of mechanized vehicle workers.  He also did his military service during this period.

In 1970 he entered the power engineering faculty of the Ivano-Frankivsk Institute of Oil and Gas. The Russification of the tuition in the institute, as well as talks with the family whose flat he lived in who had suffered repression for their participation in the national liberation struggle, made a profound impact on his view of the world. He took the decision to fight against the policy of Russification in Ukraine. Understanding that to fight alone would be hard, in 1971 Hrynkiv began to gather together trustworthy people creating a group which became active from the beginning of 1972.  On Hrynkiv’s initiative, the group was called the “Spilka ukrainskoyi molodi Halychyny” [“Union of Ukrainian Youth of Halychyna"] (UUYH).  Its organizational structure was based on that of military units of OUN-UPA [Organization of Ukrainian Nationalists and Ukrainian Resistance Army], with illegal meetings in the forest, or hills, and with each member of the group known under a code name (Hrynkiv’s code name was Thunder-mountain).  The tasks for members of the group were issued by Hrynkiv in written form, taking into account what each specific member was able to do.  Such tasks included: collecting information about the activity of OUN-UPA, finding out what the mood was like among students and recruiting new members of UUYH, collecting songs and stories about UPA and its legendary fighters.  In addition, each member of the group was expected to obtain weapons which in future, according to Hrynkiv, could be used to defend themselves and their families. Hrynkiv at that time was the leader of the committee of the Voluntary Society for helping the Army and the Navy (VSAN) at the place where he worked and therefore had the opportunity to get weapons from there and teach members of his group how to shoot at the illegal meetings in the hills.

Despite the lack of documents outlining a program, certain measures were undertaken - at one of their meetings, Hrynkiv gave a lecture on the position of Ukraine in the USSR according to official statistics; they succeeded in obtaining books about the history of Ukraine; managed to expropriate and collect weapons; they were planning also to obtain a typewriter.

The most trusted members of the group (D. DEMYDIV, R. Chupriy and I. Shovkovy) were entrusted with establishing contact with other similar groups, but they did not have time to achieve this. An informer had been planted in the group, and although he was detected quickly, the arrests still began.

On 15 March 1973 Hrynkiv was arrested, charged under Articles 62, 64, 81 (theft of State property), 140 (theft), 223 (stealing weapons and ammunition) of the Criminal Code of the Ukrainian SSR.  On 9 August 1973 in a case also involving M. Motryuk, I. Shovkovy, D. DEMYDIV and R. Chupriy, Hrynkiv was sentenced to 7 years harsh regime labour camp and 3 years exile.  He gained his experience and outlook as a political prisoner in the Perm political labour camp, No. VS-389/36 [“Perm-36”] in Kutchino, the Chusovoi district. In November 1974, Hrynkiv took part in a strike in protest at the beating up of S. SAPELYAK.  From 1974 - 1975, he was part of a group which put together information about the situation in the camps and smuggled it to the outside world, where it immediately appeared in samizdat. In 1975, Hrynkiv stated formally that he was assuming the status of a political prisoner. In November 1976, together with some other prisoners, he signed a letter to the Commission of the US Congress on checking the implementation of the Helsinki Accords about the living and working conditions of prisoners in the USSR.  In particular, due to the lack of special clothing, Hrynkiv himself worked on machinery for boring in normal clothes, and the bottom of his sleeve got caught in the lathe.  His clothes were immediately ripped off and he himself was taken to the medical unit in a state of shock.

Hrynkiv was twice taken to "brainwashing sessions’ where they tried to get him to write that he renounced his views. On the way back in 1976, he was held in the Lefortovo prison in Moscow.  Both his mother and his wife arrived, and appealed for him to be pardoned. However, in Hrynkiv’s words, he did not succumb to these attempts to persuade him to ask for a pardon.

He was, nonetheless, released early in 1978.

On his release, Hrynkiv returned home, but he could only find work at a factory as a fitter.

In 1988 he became a member of the Ukrainian Helsinki Union (UHU).

From 1988-1989 — he was the founder and editor of an illegal journal called "Karbi hir" ["Scars of the hills"], where he published articles about dissidents and the nationalist movement. In 1989 he was the editor of an almanac entitled "Novye vohni" ["New flames"]. The secretary responsible for the almanac was B. Rebryk.

Hrynkiv is the author of 3 collections of poetry and one book of prose.  He lives in the city of Kolomye in the Ivano-Frankivsk region and works for the city executive committee.

S. Sapelyak, supplemented and revised by I. Rapp 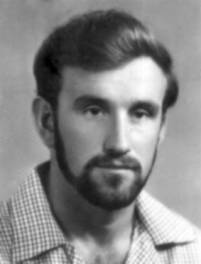 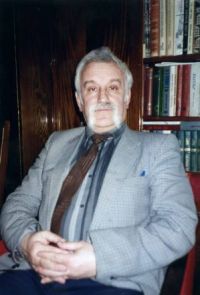 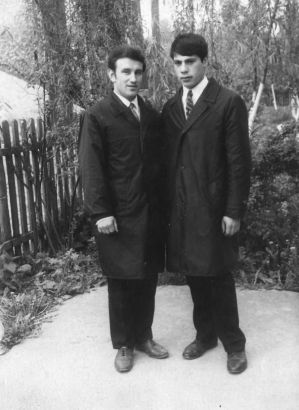