Shestydesyatnyk [Sixties activist], organizer of samizdat, a prominent figure in the human rights and national democratic movement of the 60s to 80s, active in politics, a former political prisoner,

Horyn’s father was the chairperson of the village association of “Prosvita” [“Enlightenment”], the leader of the underground village organization of the Organization of Ukrainian Nationalists (OUN), and was arrested three times by the Polish authorities. On 25 December 1944 Horyn’s pregnant mother and her two sons (their father was in the Ukrainian Resistance Army (UPA) were forcibly taken to the city of Khodoriv by NKVD officers in order to send them to Siberia, however along the way the two brothers succeeded in escaping, and Horyn’s mother was also able to flee from Khodoriv.  They hid with relatives in neighbouring villages.  In 1949, so as to not have to join a collective farm, the family moved to Khodoriv.

From 1954 – 1959, Horyn studied at the Faculty of Language and Literature of the Lviv University, leading a students’ academic literary and critical circle.  He then worked as a methodology specialist for the Lviv regional centre for national folk art, as a teacher, research assistant of the Lviv Museum of Ukrainian Art. He is a talented literary critic and art specialist.  In the first half of the 60s, Horyn was one of the outstanding representatives of the generation of Shestydesyatnyky [Sixties activists], as demonstrated by his numerous public appearances in the circles of the creative intelligentsia and his publications of the time.  He was one of the founders and deputy president of the “Klub tvorchoyi molodi” [“Club for Creative Young People” (CCY)] “Prolisok” [“Snowdrop”] in Lviv (1963).  Horyn’s educational activities were directed at raising national awareness. Having met the top figures of the Kyiv creative intelligentsia (in particular, I. SVITLYCHNY, Y. SVERSTYUK, I. DZIUBA, I. DRACH, M. Vinhranivsky and other), he worked with A. SHEVCHUK in organizing the dissemination of samizdat.

He was arrested by the Lviv KGB on 28 August 1965 and charged with “anti-Soviet agitation and propaganda” under Article 62 §1 of the Criminal Code of the UkrSSR and on 18 April 1966 was sentenced by the Lviv Regional Court in the same case as M. HORYN, I. GEL and Myroslava Zvarichevska to 3 years labour camp The Lviv Section of the Union of Writers came out with an appeal which did not directly defend Horyn, however contained the request to let him out on their guarantee; however this only led to an intensification of persecution of the intelligentsia.

Horyn served his sentence in the Mordovian political labour camps, No. 11 in Yavas.  He did a great deal to unite political prisoners and established close contact with national groups of Lithuanians, Latvians, Estonians, Russians and Jewish people. He also organized means of smuggling information to the outside world about the repressions in the labour camps, in particular, texts of sentences, statements of the “group of lawyers” (L. LUKYANENKO, I. KANDYBA and others), material about which was soon to be published as a separate book abroad.  He disseminated samizdat within the camp, organized literary evenings and took part in holding religious festivals. Horyn also prepared a monograph about the work of the artist and victim of repression P. ZALYVAKHA, and made studies of the work of I. DRACH, M. Vorobyov, Taras Shevchenko and M. OSADCHY.

After his release in 1968, he lived in Lviv, working as a construction worker and boiler stoker.

In April 1970, a letter in defence of S. KARAVANSKY  entitled “Yet again “cell trials”?” [1]was sent to the Presidium of the Supreme Court of the USSR and the Prosecutor of the USSR.  It was signed by 16 former political prisoners, including Horyn, V. CHORNOVIL, V. MOROZ and others.

Horyn maintained contact with Kyiv and Moscow dissidents, members of the Moscow Helsinki Group (MHG) and the Ukrainian Helsinki Group (UHG).  With the help of the head of the Soviet section of “Amnesty International”, Valentin Turchin, the head of MHG Yury Orlov and Alexander Ginsburg, Horyn found work in his profession as an art specialist at the Lviv Art Gallery (LAG).

In summer 1987, Horyn became a member of the Editorial Board of the opposition journal “Ukrainsky visnyk” [“Ukrainian Herald”] which had been restarted by V. CHORNOVIL, and on 30 December he joined UHG.  On 11 March 1988, as one of 19 members of UHG, he signed the “Address of the UHG to the Ukrainian and world community” about the renewal of their activity.  He wrote a range of articles on themes connected with the arts and literature, in particular, on the work of the poets V. SYMONENKO, M. OSADCHY, the sculptors I. Severa, A, Arkhipenko, the painter L. Medvid, reminiscences about the contemporaries of I. Franko – Y. Yatskiv and L. Lukiyanovych.  These were published in the samizdat journals “Ukrainsky visnyk”, “Kafedra” [“Rostrum”] (he was a member of the editorial board of these journals) and in the Lviv journal “Yevshan-zillya” (“Yevshan-grass”).  From 1989, a samizdat information bulletin “Lvivski novyny” [“Lviv News” – there were 12 issues in all] began coming out, with Horyn as Editor. This had a wide scope, covering the political and social life of the time.

In spring 1988, the Horyn brothers, Bohdan and Mykhailo, at the initiative and with the participation of V. CHORNOVIL, drew up the “Declaration of the Principles of the Ukrainian Helsinki Union” which was presented at a political rally attended by 50 thousand people in Lviv on 7 July 1988. Horyn contributed a great deal to creating structures of the UHU, the Ukrainian Republican Party (URP), Narodny Rukh Ukrainy [the Popular Movement of Ukraine] (RUKH), the Taras Shevchenko Society of the Ukrainian Language, “Memorial” and others.

B. Horyn. Na puti v Yevropu. [On the way to Europe]. Introduction, articles, interviews. // Kyiv: Publication of the URP, 1994.

B. Horyn. U poshukakh bereha [In search of a shore] // Institute of Ukrainian Studies of the National Academy of Sciences of Ukraine, Lviv, 1996.

T, Batenko.  The Individual in opposition: the second half of the twentieth century. A political portrait of Bohdan Horyn // Kalvariya, Lviv,  1997.

V. Ovsiyenko, based on material of T. Batenko and Bohdan Horyn

[1]  Sviatoslav Karavansky had been “tried” while in Vladimir Prison and sentenced to five years special regime labour camp, basically for material, including information about Katyn, that he had written and tried to have smuggled to the outside world. (translator’s note) 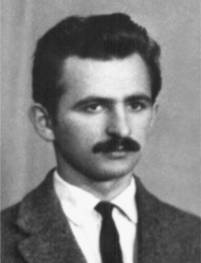