In 1946 the Ukrainian population of Lemkovshchyna (in Poland, near the Ukrainian border) was deported to Ukraine. Horbal’s family found itself in the village of Letyache, in the Zalyshchytsky district of the Ternopil region.  After finishing school in 1960, Horbal studied in the Music Department of the Chortkivsk Teachers’ Training Institute, graduating in 1963. He worked as a music teacher in the city of Borshchiv and also led a children’s ensemble, then in 1969 entered the music education faculty of the Teachers’ Training Institute. In 1970 he taught in a technical college, leading a youth ensemble. Here Horbal’s talent as a poet and composer first became evident. His works had a clear civic message.

On 20 November 1970 Horbal was detained by the KGB in Ternopil. On 24 November he was formally arrested on a charge of carrying out “anti-Soviet agitation and propaganda”.  He was accused of having circulated samizdat material, the (epic) poem “Duma” [“Thoughts”] in which the USSR is presented as a totalitarian state, and Ukraine as its colony. He was sentenced on 13 April 1971 by the Ternopil Regional Court under Article 62 § 1 of the Criminal Code of the Ukrainian SSR to 5 years labour camp and 2 years exile.

He served his sentence both in the Mordovian and Perm political labour camps, Camp No. Zh-385/19, in Lesnoye (Mordovia), then in VS-389/35 (Vsekhsvyatskaya, Perm region).  These years were particularly rich from the point of view of personal development.  While imprisoned, Horbal wrote a collection of poems “Dni i nochi” [“Days and nights”]. Most of his poetic reflections were later to be included in the collection “Detali pishchanoho hodynnyka” [“The pieces of an hour-glass”].  According to S. GLUZMAN, Horbal was like Z. ANTONYUK in being a “public writer”.  “While our camp guards animatedly waged their battle against the presence in the penal zone of warm underwear and shavers with a mechanized spring (“Not allowed!”), the quiet and outwardly calm – to the point of total indifference – Antonyuk and Horbal  surrounded themselves with piles of books and journals, and … wrote and wrote and wrote.  Their “notes” informed the world about the people in the camps, about their life. And this was a powerful weapon.  Tens, even hundreds of thousands of chekists [KGB officers] and their informers were involved in ferreting out sedition in the outside world, they threw people into prisons, labour camps and psychiatric hospitals, while here, in the other world of captivity and isolation, samizdat was being written!”

Horbal also took part, however, in all protest actions.

On 16 November 1975, Horbal was sent into exile to the village of Parabel in the Berezovsky district of the Tomsk region. He worked as a stoker 12 hours a day with no days off.  At the end of the heating period, he received two weeks holiday.  In spite of KGB prohibitions, on the way home he met up in Moscow with A. Ginsburg, P. GRIGORENKO, I. Nudel, and in Kyiv with L. SVITLYCHNA.  At the end of his exile period, he was offered work and a flat in Parabel. However, on 24 June 1977, knowing of the beginning of the campaign to crush the Ukrainian Helskinki Group (UHG), Horbal consciously chose to go to Kyiv in order to join the UHG.  Having registered his marriage to A. Marchenko, he received Kyiv registration and worked as a lift repair mechanic.

After the arrests of the founders of UHG, Horbal was virtually the only human rights activist not under administrative surveillance. Thanks to this, he was able to actively help those repressed and their families. He had their material and information about them smuggled to the West.

As an unofficial member of UHG, he was frequently detained in connection with the arrests of other human rights activists and searches were carried out of his home.

In spring 1979 Horbal received an invitation from relatives in the USA and tried to get permission to emigrate.  However his wife was not given the relevant document from work and without this the OVIR (visa and registration department) refused to accept their documents. On 23 October 1979 he was arrested. On the following day his wife received the document

On 30 October 1979, 30.10.79 UHG published a document signed by O. MESHKO, N. STROKATA and I. SENYK, entitled “Lamentation”, about the trumping up of criminal charges against dissidents in order to avoid protests about political trials in the USSR, as well as to discredit Ukrainian human rights activists.

On 21 January 1980, Horbal was sentenced by the Zhovtnevy District Court in Kyiv at a hearing held behind closed doors under Articles 17, 117 and 190 of the Criminal Code of the Ukrainian SSR to 5 years harsh regime labour camp. Only his sister, Maria, was allowed into the courtroom, other relatives were admitted only for the passing of sentence. In his final address, Horbal said: “I am possibly the first who has been charged with such a revolting trumped-up charge. Today I officially announce my membership of the Ukrainian Helsinki Human Rights Group”.

Before being sent to the camp, Horbal had the copy of his sentence and the text of his final address, as well as his letter of final (cassation) appeal, and letters confiscated. On 15 April 1980 he arrived at the criminal penal zone in Olshanskoye, in the Mykolaiv region. He worked as a lathe operator.  In 1982 he was moved to the penal colony IN-316/93 in the Mykolaiv region, where he worked in a mine extracting granite. He was surrounded on all sides by informers, however in September 1981 the journal “Vyzvolny shlyakh” (“Path of Liberation”, USA) published Horbal’s article “The Right to defence”, written while Horbal was awaiting trial. In the same year a book of poems for his two-year-old son appeared, illustrated by the author.  In 1982, the publishing house “Suchasnist” put out a collection of his poems with the title “Detali pishchanoho hodynnyka” [“The pieces of an hour-glass”].  His poems were published in English, German and French translation. In several issues of the newspaper “Ukrainske slovo” [“Ukrainian word”] between September and October 1983, an article by Horbal was published entitled: “On life in a camp for criminals”.

In 1983, in the camp, Horbal registered his marriage to Olga Stokotelna.

On 23 October 1984, Horbal was taken to the SIZO [Remand Centre] in Mykolaiv, where one day before his sentence was to end he was issued a warrant for arrest from 10 October 1984 on a charge of (“Dissemination of patently false statements defaming the Soviet political and social system”).  He was accused on the basis of 45 poems confiscated back in 1979, as well as of the articles mentioned above and the testimony of criminal provocateurs.

From 8-10 April 1985, Horbal was convicted by the Mykolaiv Regional Court under Article 62 § 2 (“anti-Soviet agitation and propaganda”), Articles 42, 43, and 26 of the Criminal Code of the Ukrainian SSR and Article 70 § 2 of the Criminal Code of the Russian SSR and sentenced to 8 years deprivation of liberty and 3 years exile. He was declared an especially dangerous repeat offender. From 25 September 1985, he served his sentence in the special regime camp at VS-389/36 in the village of Kutchino in the Perm region. On 8 December 1987, all 18 prisoners from Kutchino were moved to the penal colony VS-389/35, at Vsekhsvyatskaya. All political prisoners were told to make applications asking to be pardoned.  Horbal refused to write such a request.

On 13 June 1988, the Ukrainsky kulturolohychny klub [The Ukrainian Cultural Studies Club] (UCSC)) began a chain of hunger strikes demanding the release of all prisoners of conscience, including Horbal.

On 12 August 1988 a decree was issued by the Presidium of the Supreme Court of the USSR pardoning Horbal and others in one of the last groups of political prisoners. On 23 August he was taken by plane to the KGB in the Ukrainian SSR and released.

The overall period Horbal spent imprisoned was 16 years. He has been fully rehabilitated.

In September 1988 he became the Secretary of the Executive Committee of the Ukrainian Helsinki Union (UHU). From 1990-94 he held the post of chairperson of the Kyiv branch of the Ukrainian Republican Party (URP).  From 1990-94 he was a Deputy of the Kyiv City Council. From 1992-93 he was in charge of the editorial board of information programs for the studio “Ukrtelefilm”. On 4 March 1994, he was elected State Deputy (MP) of Ukraine. He was a founding member of the Christian Republican Party (CRP) and at its Founding Congress on 1 May 1997 was elected the First Deputy to the Chairperson.  On 30 May 1998 he became a member of the Central Board of CRP. He has been a member of the International PEN club since 1986. In 1992 he was laureate of the Vasyl Stus Award.

The External Representation of the Ukrainian Helsinki Group. Appeal to people of good will. // Suchasnist, Munich, 1984, № 12.

Alexandra Parakhonya.  Mikola Horbal. Something sublime and beautiful can only ever be built on love, never hatred. // Nyezavisimost.— 1997.— 20 May. 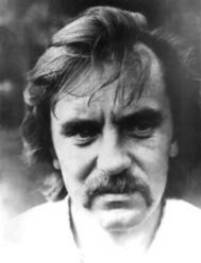