Vasyl Barladyanu(-Byrladnyk) was born in a Ukrainian village on the Dniester river. His father was repressed on 3 March 1945 for being the son of a general-cornet of the Ukrainian National Republican Army, Andriy Huly-Hulenko and died in the Mongolian uranium mines.

In 1964 he finished the Odessa School for Military Correspondents, then in 1970 – the Faculty of Russian Language and Literature of Odessa University. As an art historian, he did his practice in the museums of Moscow, Leningrad, Western Ukraine, and studied Rumanian and Bulgarian Language and Literature at the universities in Bucharest and Sofia.  From December 1969 to May 1974, he was in charge of the Department for Art Studies at Odessa University, and lectured on the history of world and Ukrainian art, classical European Literature, Ethics and Aesthetics at the Odessa Institute for Engineers of the Marine Fleet.  He carried out research into Ukrainian folk and professional art, literary, art and religious links in the Middle Ages between Ukraine and Bulgaria, Serbia, Greece, Italy and the territory of present-day Rumania. His thesis, written at that time, was on the theme: “The Portrayal of the individual in art and literature of the Second Bulgarian Kingdom 1118 – 1396”. In December, at an international conference “Ukraine – Bulgaria” in Odessa, Barladyanu’s presentation with the title “Renaissance features in the art of the Second Bulgarian Kingdom and Ukraine-Rus” immediately attracted the attention of the KGB.  He wrote a monograph on the life and work of the Ukrainian artist, Mykhailo Zhuk, and articles on issues related to Ukrainian, Rumanian and Bulgarian contacts. He began writing poetry in Russian in 1961, and in Ukrainian from 1965.

Under the pseudonym Yan Drubala, he wrote articles for samizdat on the history of the national question in the Russian Empire and in the USSR, and maintained contacts with many dissidents and patriots, in particular, with N. STROKATA-KARAVANSKA.

Persecution of Barladyanu for his patriotic and academic position began in May 1972. During questioning by the KGB in January 1974, he was accused of supporting Ukrainian nationalism.  In March that year he was expelled from the Soviet Communist Party and then in May he was dismissed from his job at Odessa University “without the right to work in ideological fields”, that is, not in research or teaching. He then lost his job at the Museum of Folk Architecture and Everyday Life in Kyiv. In May 1976, he found work as senior research assistant in the Odessa Museum of Western and Eastern Art.

On 16 June 1976, during a search of his flat, the KGB confiscated a collection of patriotic poems “Shyj, druzhyno, shvydshe prapor” [“Make a flag, my friend, as quickly as you can”], an autobiographical novel “Kompromisu ne bude” [“There will be no compromise”], as well as a lot of academic and publicist articles on the political situation in Ukraine and on the history of the national question. As a result of this and on the instruction of the KGB; in March he was dismissed from the Museum.

In December 1976, Barladyanu gave the Head of the Ukrainian Helsinki Group (UHG), M. RUDENKO a copy of his appeal addressed to the Prosecutor of the Odessa Region protesting about persecution for nationalist convictions and also his article “Do lyudej dobroyi voli” [“To people of good will”] and the autobiographical sketch “A yak zhe inakshe?” [“How else?”].  The Russian text of the sketch was published in 1977 in Paris, with a second publication in the book “Lykho z rozumu” [published in France as “The Chornovil papers”] in 1979. Barladyanu was also involved in distributing material of the UHG.

He was arrested by the Odessa Prosecutor’s office on 2 March 1977. During his arrest, he declared an indefinite hunger strike, which he stopped at the request of his relatives after the trial which took place on 27-29 June 1977. He was sentenced to 3 years harsh regime labour camps under Article 187-1 of the Criminal Code of the Ukrainian SSR (“Dissemination of patently false statements defaming the Soviet political and social system”).  The charges also included his academic works and rough drafts. Barladyanu rejected the charges. His friends and relatives were not allowed to attend the trial. Hannah Holumbiyivska came to the courtroom with flowers but was not allowed to give them to the accused. She read out a statement saying that she refused to give testimony.

Barladyanu was held in camp OR-318/76 (village of Polytsa, Volodymeretsk district, Rivne region), where he worked in a stone quarry. He spent half a year in a punishment isolation cell. On 31 January 1980 he was put there because “he had not made moves in the direction of reform”. He declared another hunger strike (in total, during those three years, he was on hunger strike for 13 months and 17 days).  While imprisoned, he wrote a collection of poems “Mizh lyudstvom i samotnistyu” [“Between humanity and solitude”], two cycles of stories “Skryzhali maha” [“Tablets of the Magus”] and “Uroki istoriyi” [“Lessons of History”], and ran a “seminar on culture” for other inmates.
Three days before the end of his sentence, on 29 February 1980, Barladyanu was taken to the Rivne SIZO [pre-trial detention centre] where a new “case” was concocted against him. He was sentenced on 13 August 1980 under the same Article 187-1 to a further three years deprivation of liberty. “Expert” opinions were given by the Associate Professor of the Rivne Institute for the Water Industry, Maximov, and the  Associate Professor of the Rivne Teachers’ Training College, Leshchenko. They examined his poems and academic articles and detected “defamation” of Soviet reality and “friendship of nations”, though they did mix up the Mongol Khan Mamai with the figure in Ukrainian folklore with the same name.

From 4 November 1980 Barladyanu  was held in labour camp No. 28 in Snizhne, then from 17 January 1981 in camp No. 82 in the village of Hostre, Chernoarmiysk district of the Donetsk region.

He was released on 28 February 1983 and worked in Odessa as an electrician. His works from that time include a novel “V dorozi do materi” [“On the way to my mother”], a historical drama “Ovidiy” [“Ovid”], a collection of poems “To Oksana”, as well as a number of articles on the history of Ukrainian culture.

From the beginning of “perestroika”, Barladyanu  again became actively involved in the human rights and national liberation struggle. On 6 September 1987, together with M. HORYN, I. HEL, Z. POPADYUK, S. KHMARA and V. CHORNOVIL, he created the Ukrainian Initiative Group for the Release of Prisoners of Conscience, which two days later became part of the International Committee for the Defence of Political Prisoners.

In September 1987 Barladyanu joined the editorial office of the journal ”Ukrainsky visnyk” [“Ukrainian Herald” ] which had been restarted by V. CHORNOVIL in August. He was also a member of the Editorial Boards of the journals “Kafedra” [“Rostrum”] and “Ukrainski Perspektivy” [“Ukrainian Outlook”] where he published a number of articles. On 30 December 1987, together with the entire editorial board of Ukrainsky visnyk”, he joined the UHG.  On 11 March 1988 he was one of the 19 members of UHG who signed the “Address of the UHG to the Ukrainian and world community” about the reactivation of the group. On 7 August 1988 it was transformed in the Ukrainian Helsinki Union (UHU).  When the Ukrainian Republican Party (URP) was created on its basis, Barladyanu remained outside the party.

In 1990 Barladyanu  travelled to Canada and the USA giving lectures on the political situation in Ukraine. Collections of his essays “Bilya vorit derzhavy” [“Near the gates of the State”] and “Shche raz pro nevolyu” [“Once again about captivity”] were published in Toronto.

In 1992 Barladyanu returned to lecturing at Odessa University and also gave lectures at the Seminary of the Ukrainian Orthodox Church of the Kyiv Patriarchate.

Vasyl Barladyanu is the author of over a thousand academic, academic-publicist works in Ukrainian, Russian, Rumanian, German, English and French. 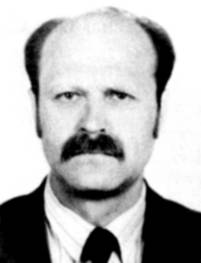