Doctor, human rights activist, author and disseminator of samizdat, one of the curators of the Solzhenitsyn Foundation

Both Olena Antoniv’s mother, Natalya Kotsyumbas (1907 – 1966) and her father, Timofei Antoniv (1902-82) were from families active in the national movement.  They consistently supported participants in the resistance movement – from the ’sichovi striltsi’ (military units fighting for Ukrainian independence, these appeared in Halychyna (Western Ukraine), and existed from 1912 through 1919, fighting both against Poland and against Bolshevik Russia) to the Shestydesyatnyky [Sixties activists].  Antoniv’s national and religious upbringing took place within the family. She was strongly affected by the harrowing images of thousands of political prisoners tortured by the NKVD in the prisons of Bibrka and Lviv, uncovered during the Nazi occupation. Studying in a Soviet school, she studied the history of Ukraine by herself, using prohibited pre-War publications and regularly attended services of the catacomb Ukrainian Greek-Catholic Church (UGCC).

After finishing school, from 1955 – 61, she studied in the medical faculty of the Lviv Medical Academy. She worked in the regional tuberculosis clinic where she is remembered to this day as having been an exceptionally sensitive and kind doctor.

During the Khrushchev “Thaw” and in subsequent years, she immersed herself totally in the cultural, and later, socio-political live of Lviv and Kyiv. She took part in the activities of the “Klub tvorchoyi molodi” [“Club for Creative Young People” (CCY)].  In 1963 she married Viacheslav Chornovil and moved with him to Vyshhorod where he was involved in the construction of the Kyiv Hydro-Electric Station.  She was also in contact with Ivan Svitlychny, Yevhen Sverstyuk, Alla Horska and other Shestydesyatnyky [Sixties activists]. She prepared, kept and distributed samizdat.

She was living in Lviv when the first wave of arrests of 1965 took.place.  Her home became a kind of political club where the   Shestydesyatnyky, former resistance fighters and members of the artistic intelligentsia could meet.  They held evenings dedicated to Taras Shevchenko, observed important anniversaries, religious festivals, in particular, preparing a Christmas ‘vertep’ (an old Ukrainian puppet theatre) at the beginning of that fateful 1972, with the participation of Vasyl Stus, Ivan KalYnets and Stefania Shabatura who were arrested a few days later.  Searches were often carried out of the home, the phones were tapped, and Antoniv was threatened with arrest.  During that time she became the effective administrator of the Solzhenitsyn Foundation [Public Foundation to help political prisoners and their families] in Western Ukraine, and risked a great deal herself to help victims of repression and their families, often using her own modest savings.  Fewer and fewer of those who shared her views remained at liberty, and the situation for the wives, sisters and mothers of political prisoners became ever more difficult. In the 80s the dissident movement in Ukraine was maintained by women like Oksana Meshko, Raisa Rudenko, Vera Lisova, Nadya and Leonida SvitlYchna, Mikhailyna Kotsyubinska, Raisa Moroz and others. 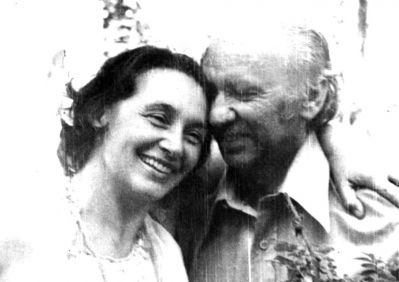 During that difficult time on 26 May 1979, Antoniv married Zinoviy KRASIVSKY.  While not formally a member of the Ukrainian Helsinki Group (UHG), Antoniv prepared and typed out many of its documents, taking them to Moscow to be given to foreign journalists. After the arrest of her husband on 12 March 1980, Antoniv was unable to find any work.  From 1981 – 82 she was subjected to persistent attacks in the press.  Threats of physical violence were also directed at her. She nonetheless continued to send information about political prisoners and to engage in her work helping victims. From 1980 to 1985, she spent a lot of time in the Tyumen region where her husband was in exile..

Antoniv saw the changes under Gorbachev primarily as an opportunity for constructive social activity, in particular, for renewing the movement to have the UGCC legalized.  Her life was tragically cut short when on 2 February 1986 she was killed in a car accident.

Перегук двох над безвістю. / Two voices calling to one another across the abyss.  The correspondence of the Ukrainian political prisoner Zinoviy Krasivsky with the American member of Amnesty International, Iris Akagoshi, Kharkiv: SP INART, 1995. p. 47. 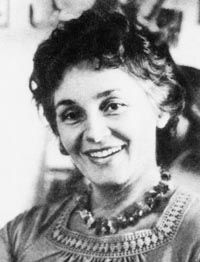 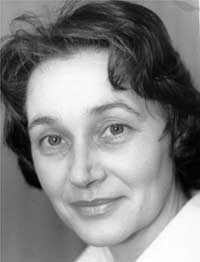 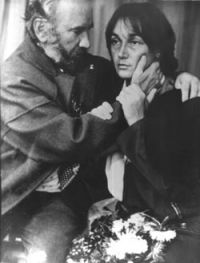