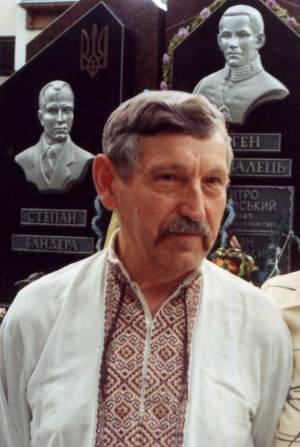 P.A.: Petro Arsenych, head of Ivano-Frankivsk oblast’ “Prosvita” society, associate professor of Prykarpattya University, honored worker of culture of Ukraine – these are all my regalia. I come from a peasant family that lived in Nizhny Bereziv, Kosiv raion. This village was visited by Ivan Franko, Bohdan Lepky, Bohdan-Ihor Antonych and others. It has glorious history with strong national traditions; many leaders of national liberation movement come from there. In particular, a distant cousin of my Mykola Arsenych who was one of the OUN founders in charge of security. I was born in 1934…
V.O.: And was Myroslav Symchych from Vyzhny [Bereziv]?
P.A.: Myroslav Symchych was from Vyzhny, he was the commander of a “sotnya”[a military unit, company] and fought “moskals” courageously in Kosmach, where colonel Dergachov perished.
V.O.: I believe, Dergachov was a general.
P.A.: That is how he is referred to in the documents. I was born in 1934.
V.O.: Give us the date, too.
P.A.: January 24, 1934. I remember everything that had happened in our parts. I have seen rebels more than once…That is what the boys proudly called themselves. I saw commander Orlyk riding his horse, and others. More than once my mother would give them food in our house. We lived in the town center. Whenever the rebels used to blow up the bridge to prevent the military and party and soviet officials from entering the village, we were always warned beforehand, so we lay down on the floor and mom and dad would cover us with pillows. Under the influence of our elders we became members of the OUN Youth organization in1949. And then, in 53, after Stalin died, the policy changed- the leading administrative positions were to be given to the local officials.
V.O.: It was Beria’s order.
P.A.: Right. At that time the most prominent students were sent to bigger cities for further studies. They summoned me to Yablunivka party committee and told me there were vacancies  in Kiev, in Kharkov and in Moscow. I went to Kiev and graduated from Kiev University in 1958.
V.O.: Department of history, right?
P.A.: Right. I was sent to Ivano-Frankivsk to work in Ethnography and History museum. In 1962 I started working as assistant in Prykarpattya, then still Ivano-Frankivsk, pedagogical institute. I was teaching archeology. At that time Khrushchev’s “thaw” began.  As a museum docent I have met former Sich fighters, the officers of Ukrainian Army of Galicia. Later when members of OUN and UPA were getting back after doing their time in jail, I was much impressed with their stories. I understood they had to be recorded. Even under the soviet rule, when these things could not be revealed, I collected their stories, recorded them and encouraged everyone to do the same. Sometimes bizarre situations occurred. I was interviewing a Sich fighter. He was telling me about his fight against Russia in the World War I. I asked: ‘And have you fought for Ukraine?” – “No I haven’t”.  Then I said: “So you fought for the emperor, but when you had to fight for Ukraine, you did not. That is why we don’t have Ukraine till now. Well, he was not sure how to answer a person whom he did not fully trust…I saw he was embarrassed and then he said: “I did fight…” I asked him to tell me the truth without fear.
It was very hard to persuade people to share their stories for me to record them. I understood the value of their memories. Sometimes they would come back asking to give the records to them, because they could not sleep peacefully unless they had them.
V.O.: How did you record them? There were no recorders at that time…
P.A.: I was just writing down whatever I heard, or asked them to put their memoirs down. Some people did. I remember a guy who was convicted, served his term in Siberia. He wrote everything about his family and brought the text to me.
And at the era of Khrushchev’s “thaw” I started disseminating samizdat books, first among students, whom I trusted, M.Maksymyuk, who later became school principle, I.Ivantsyv, the painter’s son, who was later the deputy rector of our institute among them. In 1964 Valentyn Moroz came from Lutsk to teach history in our institute, he was the youngest among us. Vynnychuk, he and I. We were three of us confronting old professor who adhered to Marxist-Leninist philosophy.
V.O.:What samizdat books have you started with?
P.A.: First of all we got B.Kravtsiv from Germany. That is what I had. We managed to make photocopies, or retyped the books. As a museum employee I collected many old editions like “Chronicles of “Chervona Kalyna”, “Prosvita” society calendar” etc. We distributed some articles of interest, like the ones giving evidence against Bolsheviks, against famine in Ukraine. Moreover, anticipating search at my place, I sent these materials to my co-students – B.Korhot, from Sumy oblast’, Mykola Shudrya and others…
V.O.: I know Shudrya.
P.A.: I disseminated materials among many people and received something in exchange. I tried to keep in touch. Chornovil was still in Lviv at that time. I dropped by the Writers’ Union and saw M.Kosiv, B.Horyn’,  I.Hereta from Ternopil. He is not alive any longer, unfortunately. Then in Kiev, I met Yevhen Proniuk, who was working in the Institute of Philosophy researching Ostap Terletsky’s work.
V.O.: It was his dissertation.

P.A.: Right, right. He went, but later related that he had done no harm to anyone. He could have refused, but he said it gave him the opportunity to warn someone. By the way, he even wrote about it, collected the materials for his archives. He kept that ticket, and in his memoirs he had written about where he was, what he said.
I know an instance when another, younger guy, certain Melnyk from Kalush, was sent on the similar mission. He loved literature, so he was sent to Czechoslovakia – to Prague, to Pryasiv. I told him: “If you decided to go, then at least warn the people that KGB is following them, so they had to be alert”.  And so he did.
V.O.: These “delegations of members of public” headed by a KGB official were brought to camps. And it was obvious that some people were coerced to participate, it was very difficult for them.
P.A.: By the way, M.Zelenchuk was visited in the camp by doctor of medical sciences Petro Vokalyuk. In the course of their conversation Mykhaylo mentioned that he would be released soon, and professor offered his help and support. Indeed, upon his return from the zone, he came to me, to help me get in touch with Vokalyuk and seek his support in the matter of registration. Only after he married a priest’s daughter Luda Lopatynska he was registered in her 2-room apartment in Ivano-Frankivsk. But Vokalyu, deceased by now, had nothing to do with, despite his promises. So it was common to send people to the camps with the goal of persuading the inmates, or even to recruit them right here.
I was summoned to the second hearing in Moroz trial – I had to be there and to report everything later. I entered the court building and saw a whole bunch of people. I recognized some people from Lviv and told them to talk as little as possible because of the surveillance – and went away. I was reprimanded later:” We assumed you would repent and help us, but you didn’t go, you found out nothing, you reported nothing”. I retorted:” I told you already, hire me properly, then I will work, otherwise… And I will do my bit – if an American spy happens on my way then I’ll report, but I will not rat on my own people”. And thank God it worked. Because I was worried – just fancy, the very idea to write that article against the Ukrainian bourgeois nationalism was tantamount to hanging oneself.  But God saved me from doing it and I put no one to jail nor caused any trouble for people testifying against them. But they were recruiting everyone. Quite recently my neighbor confessed that he was recruited too, to report on my visitors. But it was only in 1992. These things must be recorded, these methods, the collaboration. All these facts must be made public, so that all these turn-coats would be stripped of all their privileges.  Some people are so double-faced that they pretend to be real heroes while in fact they were nothing but henchmen. It should be checked. I myself am not afraid of such lustration. There is no evidence against me - I harmed no one, although I was not a saint either…Now it makes me feel bad to think that I did not refuse point blank, but pretended I was a model soviet citizen and would report an American spy if I come across one.. It was unnecessary. But you know what their methods of persuasion were. They terrorized people. Once I was even beaten. They grabbed me by the hair and I started screaming: “Fascists! What are you doing?” They used no force on me after that. They had other methods of psychological pressure – dragging people from one room to another, from one officer to the next one, ending with KGB commander himself -oh, they could torment a person infinitely. Later during the hearing I explained that I lied under torture like any one would. But my final word helped Valentyn Moroz in his line of defense. Finally he received lesser term than he might have. It was a first open hearing so he was convicted to a shorter term. The second one was closed, though.
V.O.: Right, the wave of 1965 arrests was not that severe. The longest terms were given to M.Horyn and Masyutko, while the other s received even less.
Р.А.: In 1990 I was elected a deputy to the oblast’ council and to the city council. Roman Krutsyk was also a deputy then. We organized oblast’ commission for commemorating the victims of bolsheviks’ terror and for taking down monuments erected under Bolshevik regime. I headed the commission in charge of dismantling Lenin monuments. It was not easy, not everyone had courage to sign the decision, but the demolition of Lenin’s monument in Ivano-

Frankivsk had to be somehow justified. It was made by Kalchenko and had certain artistic value. Still we gathered enough people willing to sign. Anyway, we managed to do it. The authorities did not support our commission in our efforts to retrieve the archive materials on reprisals.  It would be good to have an independent organization that would collect the data, while people who had witnessed the crimes are still among us. Because earlier or later we have, with the help of international organizations, to bring the terrible communist regime to trial for ruining so many people’s lives. By the way the authorities are also reluctant to return the houses lost in the course of reprisals, to their lawful owners. I believe the task of your partner organizations is supporting the patriots in their efforts to be recompensed, at least partially.