A member of the United Party of Liberation of Ukraine. 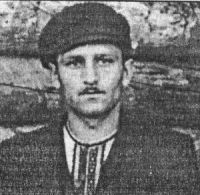 In 1947, Yurchyk finished the seven-year school. That year his brothers Vasyl (b. 1926) and Mykhailo (b. 1929 born) were imprisoned for participating in UIA; they did their terms in Siberia and the North. In 1949, his mother together with her sons Mykola (1933), Stepan (1937) and Bohdan (1938) were exiled to Khabarovsk Krai forever. In 1956, the family was released and returned to Broshniv, but the authorities did not want to register it there and did not give back their khata. They rented rooms here and there.

Yurchyk served in the Soviet army in Sambir, Lviv Oblast, and later worked at Broshniv House-Building Plant. He met there Bohdan TYMKIV, Ivan Strutynskyi, Yarema Tkachuk, who had already been members of the United Liberation Party of Ukraine. The organization existed since 1955. In the spring of 1958, the constitution of the party and its  program were developed by B.TYMKIV and amended by I.STRUTYNSKYI and V.PLOSHCHAK and adopted. The organization’s goal was to unite all segments of the population in the struggle for the independence of Ukraine and to achieve disconnection from the Soviet Union based on the Constitution, which granted the right to leave for each republic. They intended to contact such organizations in other republics.

The ULPU propagated its ideology being a good role model, conducting oral drive, participating in amateur performances, awakening consciousness of national youth. They had no printed matter, but were going to buy a typewriter.

The party groups were active in Kolomyya, Village of Pyadyky, in Ivano-Frankivsk, Broshniv and Vyhoda. The candidates were given careful consideration at closed meetings, and then they were proposed to join the organization. The oath was signed and fixed with blood. The meetings took place in Pyadyky, in Vyhoda, Dolyna, Kolomyya; during the meeting the security guards were posted; the strict secrecy was a must (the aliases were introduced; Yurchyk was called Syla); therefore there were no failures; in all probability they were not followed. The ULPU was discovered due to tips of two of its members (Mykhailo Cherevko and Myroslav Maslovskyi). The arrests began on 04.12.1958.

At trial, the prosecutor demanded death penalty for five ULPU members (B. GERMANIUK, Ya. TKACHUK, M.PLOSCHAKOV, I.STRUTYNSKYI and B.TYMKIV), but on 10.03.1959 the Ivano-Frankivsk Oblast Court sentenced them to 10 years of imprisonment in high security camps on charges of anti-Soviet nationalist activities under art. 54, p. 1a and p. 11. I.KONEVYCH and YURCHYK were sentenced to 7 years, V.PLOSHCHAK to 2 years. Another 20 ULPU members were witnesses.

In 1965, Yurchyk was discharged and went to his brother Vasyl in the Krasnoyarsk Krai and worked as an electric welder for a truckers’ team. In 1967 he returned to Broshniv, but for a long time the officials refused to record him and he remained jobless. Finally he got a job of electric welder at the Broshniv woodworking plant He got married to Stefaniya Ivanivna Lypovska, and brought up sons Bohdan and Roman. As a good professional, Yurchyk was transferred to the woodworking plant construction in the Village of Vyhoda, where he got an apartment.

He took an active part in the movement for independence.

He was buried in the Village of Vyhoda.