Member of the United Party for the Liberation of Ukraine (UPLU).

Peasant by origin. His father headed Prosvita and during the "second comeback of Bolsheviks" he was an elected and not appointed head of the collective farm, which helped OUN underground. P. graduated from the junior high school in his native village.

During the war, P. as a foolhardy boy loved and collected weapons, maintained contact with regional SS OUN "Bystryi". He wanted to join guerrillas, but his request was turned down as he was too short. He put wounded guerrilla Morozenko on his feet and armed him.

In 1951, he was called up for service in the Soviet Army. He served in the Leningrad Military District in the ordnance yard near the Town of Luga. Then, from spring to late fall he removed mines in the Novgorod Oblast, for which he was merited, but the high command did not allow to confer this decoration upon the “Banderivets”. Then district commander Zakharov awarded him a watch engraved with the owner’s name.

After his discharge he could not register at home. He got a job at the post office in Kolomyya and then as an adjuster at the weaving factory. He was the best footballer in the region.

P. became a founding member of the youth organization "United Party of Liberation of Ukraine" (UPLU), which intended to unite all layers of population in the struggle for the independence of Ukraine based on the Constitution of the USSR which provided for the union secession. They also intended to connect with similar organizations in other republics.

Each time the organization meetings were held at a different location, the security guards were posted, the strict conspiracy was maintained, and pseudos were used (his pseudo was Bilyi). However, they were given up by stoolies, former political prisoners recruited by the KGB.

On 08.12.1958, P. was arrested in Pyadyky. He did not try to escape, because it happened in the presence of his seriously ill father. During the search the agents found a magazine which contained an article depicting how Khrushchev shot in Vinnytsia, in Piddorohiv, 40,000 Ukrainians and how the Germans discovered these graves. They brought him to Ivano-Frankivsk and kept questioning him for 3 days in a row without letting him to sleep and eat. The investigators changed every 4 hours. P. did not confess to anything. They put him into a pre-trial prison, where he slept on a bench and got severe burns from the radiator. P. was twice fixed on a chair and tortured with stun guns and day in and day out the agents used to swear. They did not dare to beat him, because the felt they would get the wind up.

Then he was questioned by Major Meshcheriakov, who openly grieved for Stalin’s times. P. suggested face-to-face meeting with B. HERMANIUK. As agents Myroslav Maslovskyi, Hayovyi and Kozak had already given the UPLU documents to the KGB, HERMANIUK allowed P. to speak.

During the session of the Ivano-Frankivsk Oblast Court, on 10.03.1959 the prosecutor demanded death penalty for B. HERMANIUK, Ya. TKACHUK, B. TYMKIV, I. STRUTYNSKYI, and P., but the court sentenced them to ten years of detention in high security camps on charges in anti-Soviet nationalist activities under art. 54, p. 1a and p. 11. M. YURCHYK and I. KONEVYCH were sentenced to 7 years, and V. PLOSCHAK to two years. Another 20 members were UPLU witnesses.

He did his term in the Krasnoyarsk Krai (Vihorevka) in the 10th and 11th camps and from 1960 in Mordovia camps nos. 2 and 11 (Yavas). In the 7th camp he organized the Ukrainian football team and they played against Russian, Lithuanian, and German teams. It was during the Thaw when prisoners could walk in civilian clothes, had cameras, and musical instruments. All civilians, who had come to visit, were let into the zone, and the national and religious holidays were observed. In 1961, the rules were toughened. During the Caribbean crisis in October 1962 the soldiers said, “Guys, the pits are ready for you”. It meant that in the case of war the prisoners would be shot.

Not to let the administration to increase the output norms, P. fulfilled the norm for 30% on principle. When the Sixtiers were brought to the camp (L. Lukyanenko, B. and M. Horyn), P. participated in the concealment and transfer to the outside of information on the situation of the political prisoners.

On 08.12.1958, P. left the 11th zone, went to Moscow, lost the tail and handed the human rights activists the information. In Kolomyya he was met by his brother V. PLOSHCHAK and the KGB.

He went to work at the weaving factory as a plumber and then as a machine setup man.

With the advent of perestroika he actively participated in social and political movement, particularly in the formal opening of the grave of Sich riflemen, in UHG activities, and Brotherhood of UIA warriors. 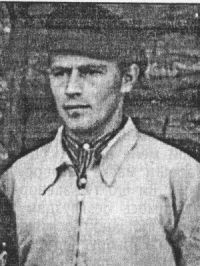