Klebanov first attended a mining college and then from 1956 – 1960 studied at the Donetsk Polytechnic.

In Donetsk he worked in factories and mines as a loader, hammerer, textile-worker, coal-plough machine driver and mining specialist, then in Makeyevka, in the Donbas region, he was foreman of a mining team and design engineer.

In 1958 he began to speak out again flagrant violations of labour legislation and safety norms, as well as against abuses by the administration. He was systematically punished for this with dismissals or by being moved to other jobs however he did not let this deter him.

In September 1968 he was arrested for speaking out in support of workers’ rights and charged under Article 187-1 of the Criminal Code of the Ukrainian SSR (“Dissemination of patently false statements defaming the Soviet political and social system”).  A ruling of the Donetsk Regional Court from 29 September 1968 declared him mentally unfit and sent him to the Dnipropetrovsk Special Psychiatric Hospital (SPH) where he was held for around 5 years. Following his release (at the end of 1973), he was unable to find a job anywhere. He went to Moscow and began approaching, both in person and in writing, higher State bodies asking that he be reinstated in his job and paid material compensation for the time spent in the SPH (he was to write in all about thirty letters). It was at that time that he met Moscow human rights activists and signed a petition in support of Sergei Kovalyov (on 9 January 1976) and Andrei Tverdokhlebov (May 1976). In February 1977 he was again forcibly hospitalized in Moscow and sent to the Dnipropetrovsk Psychiatric Hospital where he was kept for two months.

During his period of going from one State body to another in Moscow, Klebanov had met people with similar problems who had spent long hours in the reception rooms of the Supreme Soviet, of the Central Committee of the Communist Party, of the Prosecutor’s office, the All-Union Central Council of Trade Unions and so forth.  Having joined forces, they now began sending collective statements to various Soviet bodies, bring to the notice of the authorities the “lack of attention” of Soviet bureaucrats to the needs of the workers. They received no response to any of these letters.

In summer 1977 Klebanov made one of his first attempts to make contact with foreign correspondents in order to tell them about the terrible position workers were in. On 25 November 1977 at a specially organized press conference in Moscow, Klebanov together with others who had suffered injustice, passed on to foreign correspondents “An Open letter to the world community about the real position of workers and blue-collar workers on the eve of the 60th anniversary of the founding of the USSR”, which had been signed on 18 September by 25 Soviet workers. Klebanov spoke at this press conference, describing the mass discontentment of workers with their position and pointing to violations of labour laws, dismissals and other forms of persecution. Each of those present was to confirm Klebanov’s assessment through their own personal stories.  It was intended that copies of the letter would be sent to the UN and to the Belgrade Congress of State – signatories to the Helsinki Accords.

The “United claimants” did not have firm contact with activists of the human rights movement and treated them with some prejudice. Klebanov was to emphasise on several occasions that he had nothing in common with “dissidents” and that his aim and that of those with similar views was to help in the building of communism and to fight bureaucracy and red tape”. To some degree these statements were a naïve attempt to protect them from the retribution which, as they knew, awaited “dissidents”, however they did in part reflect the sense of self-awareness of the claimants, as ordinary Soviet people who, through no will of their own, had been thrown out of the mainstream of official Soviet life.  They had neither the psychology of human rights activists, nor their experience.

Soon after the press conference a delegation of between 20 and 30 people, led by Klebanov, asked for a meeting with the KGB.  They explained that they were not opposing the Soviet regime, but that each had a particular issue which required resolution and that therefore they should not be punished. They were assured by the KGB that all their problems would be dealt with if they stopped giving press conferences.

Repressive measures were soon however to begin. On 19 December 1977, Klebanov was detained by the police and placed in a Moscow psychiatric hospital. The Head Doctor of the hospital refused to give Klebanov’s wife any information about her husband’s state of health, and four days later Klebanov was sent to the Makeyevka Psychiatric Hospital with the diagnosis “paranoiac development of personality’, and was released only on 28 December.  Following his return from there he suggested to those with similar grievances to his own that they create a trade union to fight together for their rights.

The second press conference held for foreign correspondents by Klebanov and the others took place on 10 January 1978 and the third on 26 January. An announcement was made about the creation of an Association of free trade unions of workers (the word “association” was soon to be left off).

In January and February 1978 Klebanov circulated the Charter of the Free Trade Union to protect workers and sent a copy of this Charter to the International Labour Organization with the request to support and register them.

The Moscow Helsinki Group (MHG) declared their support for this initiative on 16 February 1978.

Attempting to attract as many people as possible, Klebanov assured them that creating a trade union was not against the law and that there was no need to fear any form of repression. More than 200 people joined up, however as soon as Klebanov and two of his closest helpers were arrested, the trade union disintegrated.

On 7 February 1978 Klebanov was detained in Moscow and sent to the Donetsk Psychiatric Hospital. He was charged under Article 190-1 of the Criminal Code of the RSFSR (“Dissemination of patently false statements defaming the Soviet political and social system”). In May 1978 a court reviewing Klebanov’s case in his absence declared him mentally unfit and sent him for compulsory treatment to a special psychiatric hospital. Over a period of 10 years when Klebanov was officially classified as psychologically ill, he was held on frequent occasions in hospitals in Moscow, Dnipropetrovsk, Donetsk, Tashkent and Makeyevka and virtually without a break treated with neuroleptics (anti-psychotic drugs).

Klebanov was discharged from psychiatric hospital at the end of 1987 being diagnosed mentally fit.

He was totally rehabilitated under a Resolution of the Supreme Court of the Ukrainian SSR on 26 August 1988.  Following his release he returned to active trade union activity. He created and headed a new trade union organization under the old name of free trade unions. In March 1988 he attempted to join forces with the Free Inter-Professional Association of Workers (Russian: SMOT[1]), however the Representative Council of the latter rejected the application from Klebanov and his group for membership on the grounds of differences in views.

Volodymyr Klebanov is a pensioner and lives in Moscow.

[1] SMOT was created in 1978 by, among others, Lev Volokhonsky and Valeriya Novodvorskaya. By profession the founding members included an electrician, worker, librarian and student, expelled from her institute.  (translator’s note) 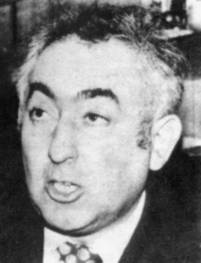