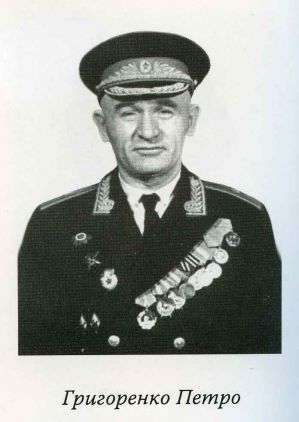 The memory of the renowned human rights activist , a dissident , fighter of the consequences of Stalin and Khrushchev’s policies , the founder of the Ukrainian Helsinki Group, friend of academician Andrei Sakharov - General Petro Grigorenko immortalized hero at home . In a city of Primorsk of Zaporozhye region the memorial plug was placed on the facade of the regional Ukrainian- Bulgarian Lyceum- former Nogaisk working school . Here he studied in the years 1918-1921 .

Petro Grigorenko was born in a village near the seaside Borysivka . His life was as grand as tragic. Integrity, formidable courage , love for people led him through the struggle for a better future for their people. During the Second World War he defended his homeland from the Nazis . Later , in early 1960-s , as a professor of the military academy Frunze , General Grigorenko publicly delivered a sharp criticism of the policies of Stalin and Khrushchev. He founded "Union of struggle for revival of Leninism". In the 70’s he was one of the founders of the Helsinki Group in Moscow , and later - in Kiev , coordinated their activities . The Communist regime persecuted him for his freethinking . Petro Grigorenko has been deprived of his military rank , awards and pensions, imprisoned several times , sent for compulsory treatment in a special psychiatric hospitals. As Andrei Sakharov , he was recognized as dissident , late in 70’s he was exiled from the Soviet Union, his citizenship was revoked and he was forbidden to return home . He died in the United States only four years before the independence of Ukraine was proclaimed.

The memory of this remarkable man immortalized in street names, particularly in Kiev one of the city avenues bears his name . And , for example , in Crimea , General Grigorenko ( his was restored after rehabilitation) is given a special tribute for what was quite an effort to protect the rights of Crimean Tatars and other deported peoples. In Crimea the monument to him was erected and his name was given to the street street in several localities.

According to the Zaporizhzhya regional state administration Alexander Starukha soon his name will be bestowed on the streets and Borysivka and Primorsk , said our newspaper correspondent Natalia ZVORYGINA.