Nekrasov’s parents were friendly with Lenin and Lunacharsky. They lived for many years abroad, and Nekrasov himself lived with them in Paris for several years before the family returned to Kyiv. He studied at the Architecture Faculty of Kyiv Structural Engineering Institute and at the same time at a theatre studio at the Theatre of Russian Drama which he graduated from in 1937.

For two years before the outbreak of the Second World War Nekrasov worked as an actor in different theatres. At the front Nekrasov was a sniper, and was twice seriously wounded. After the Battle of Stalingrad in 1942 Nekrasov, as he put it “with a pure heart and motives”, joined the Communist Party. His first doubts about the Party appeared in 1946 after the notorious resolution about the journals “Zvezda” [“Star”] and “Leningrad”[1].

In 1946 the journal “Znamya” [“Banner”] published Nekrasov’s novel “V okopakh Stalingrada” [“In the trenches of Stalingrad”] for which he was awarded the Stalin Prize for Literature the following year.  This was the first and for many years virtually the only truthful book to be published about the War. Nekrasov spent all his prize money on buying wheelchairs for invalids of the War.

In the words of his friend, the journalist and writer G. Kipnys, there was always something charmingly boyish about Nekrasov.  For example he painted a self-portrait in Annensky’s style with even a ‘signature of the artist’ forged below. Many of those who knew the artist well were unable to detect the forgery. He also liked to forge postage stamps and was childishly delighted when the post office did not notice they were fakes.
Nekrasov loved Kyiv and never tired of showing any visitors to the city his favourite places. It was Nekrasov who found the building Mikhail Bulgakov[2] had lived in on Andriyivsky uzviz [slope] and told people about it. It was he also who ensured that the Grave to the Unknown Soldier was put in order, and that a Memorial was erected at Babi Yar[3].  He also searched out information about the history of the White Guard in Kyiv.
Nekrasov was criticized both for his friendship with Ukrainian cultural figures, and for his contacts with Ukrainian nationalists. When he protested against the creation of an entertainment park at Babi Yar he was accused of Zionism.

In 1963 an individual Party matter was raised over Nekrasov’s book about America “Po obe storony okeana” [“On both sides of the ocean”], which resulted in a severe reprimand. Nekrasov was also slated by Khrushchev during the attack by the latter on the creative intelligentsia.
During the first wave of arrests of members of the Ukrainian intelligentsia in 1965 a meeting was called of representatives of the Union of Writers of Ukraine, the Presidium of the Verkhovna Rada of the Ukrainian SSR and the Central Committee of the Communist Party of Ukraine, which discussed, or more accurately, pulled apart the works of I. DZIUBA, L. KOSTENKO, I. DRACH, Nekrasov and others, who were called upon to give recantations. Nekrasov stated that he had always told, told and would tell the truth, that truth for which he had fought in the trenches of Stalingrad. Unexpectedly the audience broke out into applause, and even the Presidium, headed by M. Podgorny, was forced, as the bard Aleksandr Galich put it, to ‘put their hands together’.

However the typeset of a two-volume edition of Nekrasov’s work was dismantled.

In 1966 Nekrasov was one of 25 scientific and cultural figures who signed a letter to the General Secretary of the Central Committee of the Soviet Communist Party protesting at the ‘rehabilitation’ of Stalin. This marked the beginning of his civic activity in opposition to the regime. In Autumn 1966 he signed a collective letter to the Supreme Soviet of the RSFSR against two new Articles of Criminal legislation (190-1 і 190-3[4]), introduced to fight dissidents.

In 1968 he was one of many who signed a letter to Deputies of the Supreme Soviet of the USSR protesting at the conviction of five of those who came out on Red Square to protest at the invasion of Czechoslovakia[5], this being a violation of fundamental rights and freedoms of the individual.

In 1969 he faced a new individual Party investigation over his letter in defence of V. CHORNOVIL and his public speech on the 25th anniversary of the Massacre of Jews at Babi Yar.
Each time this was accompanied by slating sessions, explanations and ended up in bans on publishing his writing.

Nekrasov always loved and was close to the cinema. His filmscript was used for the film “Soldaty” [“Soldiers”].  During the worst years, when his books had stopped being published altogether, a documentary film based on Nekrasov’s script was made in many parts entitled “Neizvestnomu soldatu” [“To the Unknown Soldier”] which received an honorary award at the Leipzig Festival of documentary films, as well as the film chronicle “Pitdesyat vosem minut v Italiyi” [“Fifty eight minutes in Italy”].
In 1970 Nekrasov’s work was published abroad for the first time (in the journal “Grani” №74).  In June 1972 the KGB carried out a search of his home during which they found samizdat materials. In the same year, together with Andrei Sakharov, Nekrasov came out in defence of L. PLYUSHCH.

In 1972 Nekrasov was expelled from the Party, which he was to call the happiest day of his life. After this Nekrasov’s name was immediately added to the ‘blacklist’ of the Secretary of the Central Committee of the Ukrainian Communist Party, V. Malanchuk.

Pressure and persecution of Nekrasov intensified. During the second wave of arrests among members of the Ukrainian intelligentsia (1972-1973), many cultural figures were forced to publicly denounce Nekrasov and those who refused (for example, H. SNEGIRYOV) were themselves subjected to persecution.
On 17 January 1974 a 42-hour search (with a break for the night) was carried out of Nekrasov’s flat, with seven sacks of manuscripts, books, journals, newspapers, letters, photographs and other items being taken away.

In March 1974 Nekrasov, who was visiting people in Moscow, was forced to return to Kyiv, his registered place of resistance.

An article by Nekrasov appeared in samizdat under the title “Komu eta nuzhna?” [“Who needs this?”] in which he wrote about the persecution he had experienced for the last 11 years and about the fact that the regime was deliberately, by depriving him of readers, pushing him to emigrate. If the regime wanted to force him in such a fashion to perjure his soul, then he emphatically refused to oblige – “Better than that my readers do without my books. I will never degrade them with lies”.

In emigration, Nekrasov first lived in Paris where he worked for Radio “Svoboda” [Radio “Liberty”], then moved around a lot and, of course, wrote. He published 6 new books (Memoirs, travel notes, articles and essays), however he suffered a lot from not being in his accustomed environment and from the loss of his readers.

Viktor Nekrasov died on 3 September 1987. He is buried in the Russian cemetery in Paris.

[1]  The Resolution of the Central Committee of the Communist Party of the USSR slammed the two journals for publishing “ideologically harmful” literature. The targets of this serious attack were in fact the writer Mikhail Zoshchenko and poet Anna Akhmatova. (translator’s note)

[2]  Mikhail Bulgakov, writer and playwright, most famous for his novel The Master and Margarita was himself born in Kyiv, and lived for some time at no. 13 Andriyivsky uzviz.  (translator’s note)

[3]  Babi Yar (in Ukrainian Babyn Yar) is a ravine near Kyiv, where on 29 and 30 September 1941 the Nazis murdered more than 34 thousand Jewish people.  Later others, including Roma people and Soviet prisoners of war, were also murdered in the ravine. (translator’s note)

[4]  Article 190-1 was “for disseminating untrue stories which defame the Soviet State and social order”, while 190-3 was for “the organization of or active participation in group actions disrupting social order”.  These Articles under different numbers existed also in the Criminal Code of the UkrSSR.  (translator’s note)

[5]  There were 8 people  (including Natalya Gorbanevskaya and Larisa Bogoraz) who came out onto Red Square on 25 August 1968 to protest against the invasion by the USSR and its Warsaw Pact allies.  They were arrested within a few minutes. Two were put in psychiatric hospitals, five arrested and sentenced to terms of imprisonment. One was not charged.  (translator’s note) 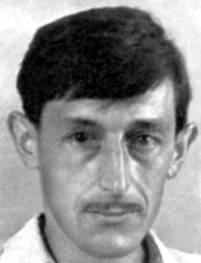