Mathematician, prominent publicist and literature specialist, human rights activist, member of the Initiative Group for the Defence of Human Rights in the USSR, member of the External Representation of the Ukrainian Helsinki group (UHG), victim of punitive psychiatry.

Plyushch was born into a worker’s family.  His father went to the front at the very outset of World War Two and was never to return. The family moved to Odessa after doctors found that Leonid was suffering from tuberculosis of the bone. There he spent four years unable to move from his bed.

In 1959 he finished school with a silver medal and entered the Physics and Mathematics Department of Odessa State University, however graduated in 1962 from the Mechanics and Mathematics Faculty of Kyiv University. He also worked for a year as a village teacher.  Until 1968 he held the position of engineer – mathematician, with specialization in biological and psychological cybernetics, in the Institute of Cybernetics of the Academy of Sciences of the Ukrainian SSR.  He married Tatyana Zhytnykova during this period, and their two children were born.

Plyushch took an active role in the Ukrainian national and democratic movement of the Shestydesyatnyky [Sixties activists].  He provided a link between Ukrainian and Moscow human rights activists, taking Ukrainian samizdat to those in Moscow and bringing samizdat books from Moscow to Kyiv from where they were distributed around the entire country.
In 1964 after Khruschev was deposed, Plyushch wrote a letter to the Central Committee of the Communist Party of the Soviet Union in which he expressed his thoughts on democratization in the USSR. From 1966 he began writing articles for samizdat about the nature of the Soviet State and its ideology, as well as about national issues in the USSR.  Like many of the dissidents of his generation, Plyushch was a committed Marxist and believed in “socialism with a human face”.

In July 1968 Plyushch was dismissed from his job because of a hard-hitting article he had written and sent to the newspaper “Komsomolskaya Pravda” [“Komsomol truth”] about the trial of Aleksandr Ginsburg. He began collecting information and passing it on to ’Khronika tekushchykh sobytiy’ [’Chronicle of Current Events’] (CCE) and circulated the bulletin ‘Ukrainsky visnyk’ [‘Ukrainian Herald’]..

In May 1969 Plyushch found temporary work at a post office sewing up parcels, but was soon fired because of a letter he had written to the UN.

In 1969 he became a member of the Initiative Group for the Defence of Human Rights in the USSR.  On 20 May he signed the first letter from the Initiative Group announcing its formation, then on 26 November, a letter protesting against repression of members of the Group.  In May 1970 he wrote letters to the Press Agencies ‘Novosti’ and ‘Reuter’ about the Group. On 26 Nov 1971 he signed a letter to the Fifth International Congress of Psychiatrists with a call to fight against psychiatric persecution in the USSR. Between 1969 and 1971 he was to sign many letters in support of  Alexander Solzhenitsyn, Andrei Sakharov, V. Bukovsky and Z. Medvedev.

On 15 January 1972 after several searches Plyushch was arrested and charged under Article 62 of the Criminal Code of the UkrSSR (“anti-Soviet agitation and propaganda for the purpose of undermining the Soviet regime”). In January 1973 the court ruled that Plyushch had been fit to answer for his actions at the time when he committed his “crime”.  On 5 July 1973 he was sent by the court for forced treatment to the Dnipropetrovsk Special Psychiatric Hospital with the diagnosis "sluggish schizophrenia”, where he was held until January 1976. He was “treated” for 7-8 months with haloperidol (an anti-psychotic drug).  On 3 June 1974 a medical commission extended this “treatment”.  In the summer of that year the International Congress of Mathematicians in Vancouver issued a statement calling for Plyushch’s immediate release. In 1975 T. Khodorovych collected material and published in samizdat a book with the title “The Case of Leonid Plyushch”.  On 23 October a big demonstration in support of Plyushch was organized in Paris.  The leaders of the communist parties of France, England and Italy issued demands for his release.

In January 1976 Plyushch was, against his will, removed from the USSR and has since then lived in France. He was declared mentally fit and healthy by Western psychiatrists.

In 1976 Plyushch published an autobiography called “Na karnavali istoriyi” [“History’s carnival”] which has been translated into many languages and published in a number of countries.

In 1977 Plyushch began an external representative of the Ukrainian Helsinki group in the West. He devoted a lot of time and energy helping friends who were still incarcerated in Soviet penal institutes. By the end of the 1970s he had lost any illusions as to the possibility of “good” socialism and had become a convinced anti-communist.  His interests gradually moved from politics to cultural and literature studies. Plyushch is a member of the Association of Ukrainian Writers “Slovo” [“The Word”].  He is a full member of the Cultural Studies Section of the Shevchenko Scientific Society.  His monograph “Ekzod Tarasa Shevchenka. Navkolo “Moskalevoyi krynytsi”  [The Exodus of Taras Shevchenko. A study of the “Soldier’s Well”] is an extremely original psychological and semiotic study of the two versions of the poetic work “Moskaleva krynytsa”, which is methodologically close to the Moscow-Tartu Structuralist School and the well-known works of Mikhail Bakhtin.

With the beginning of democratic changes in the USSR, Plyushch began to almost entirely devote himself to literature. He has written analytical articles on the work of Taras Shevchenko, M. Khvylyovy, V. Barka, Bohdan-Ihor Antonych, P. Tychyna, V. STUS, M. RUDENKO, O. Dovzhenko, A. Galich which have been published in Ukrainian, French and Russian. He is the author of an analytical documentary film with the title “Z Malorosiyi v Ukrainu” [“From Little Russia to Ukraine”[1]], as well as articles on the state and prospects of Ukrainian culture. He enjoys enormous respect in the Ukrainian community.

[1]  Malorosya [Little Russia] is a term which was often used by Russians (and some Ukrainians) when referring to Ukraine.  (translator’s note) 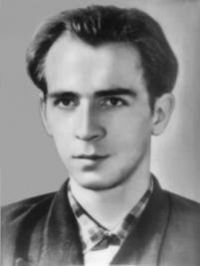