Rebryk was born into a peasant family.  His mother died in 1943. His father, who was in the Ukrainian Resistance Army (UPA), was imprisoned in 1944 and only released in 1956.

In 1956 Rebryk moved to Manitogorsk in the Urals where he trained as a carpenter, while also finishing secondary school education with specialization in radio engineering, as a radio operator for strategic aircrafts. From 1957 – 1962 he served in the army, where he lost 70% of his vision. From 1962-1967 he was an instructor for an Ivano-Frankivsk regional school for army cadets.
On 6 February 1967, Rebryk was arrested for “educating student conscripts in a nationalistic spirit”.  In actual fact, he was defending the use of the Ukrainian language and encouraging a sense of national awareness.

On 12 May 1967 he was sentenced by the Ivano-Frankivsk Regional Court under Article 62 § 1 of the Criminal Code of the Ukrainian SSR (“anti-Soviet agitation and propaganda” ) to 3 years labour camp and a 5 year ban on holding any position related to teaching and bringing up young people. He served his camp sentence in the Mordovian political labour camps from where he was released on 6 February 1970.

He was arrested again on 23 May 1974 and charged with distributing samizdat material.  On 17 February 1975 he was designated a particularly dangerous repeat offender by the Ivano-Frankivsk Regional Court, and sentenced under Article 62 § 2 of the Criminal Code to 7 years special regime labour camp and 3 years exile. He served his sentence in camp No. ZhKh-385/1-6 (Sosnovka, Mordovia).

In July 1976 his refusal to move into a cell for non-political prisoners led to his being seriously beaten by an officer and guard, and then thrown into solitary confinement for 15 days.

On 7 July 1977, at the Lviv transfer prison, Rebryk refused to remove a cross he was wearing under his clothes. He was beaten by the officer on duty who was helped by the guard. Throwing him into a basement cell, the senior lieutenant poured several bucket-loads of water onto the floor, jeering: “Let’s see if your God dries this cement, and if he does, we’ll pour some more”.

In July 1978 Rebryk was taken for “re-education” to Ivano-Frankivsk.  Along the way he was beaten so badly that on arriving he ended up in hospital.

On 1 March 1980, all the prisoners from Sosnovka were transferred to the special regime unit VS-389/36-1, a specially created zone two hundred metres from the harsh regime zone in the settlement of Kutchino, Chusovoi district, one of the Perm political labour camps. Before this, personal items and books belonging to Rebryk were taken away. Some of the books were burned, while others were placed in the camp library.

On 27 April 1981 he was sent into exile to the Tselinograd region of Kazakhstan. He was released from custody on 25 May and worked as part of a construction brigade.

Following his release in 1984, he remained in Kazakhstan, intending to try to emigrate from the USSR.  He worked at the Tselinograd porcelain factory. He tried to leave the USSR six times in order to find treatment for his eyes, however was never granted permission.

In summer 1987 he returned to Ivano-Frankivsk.

In 1988, in the town of Kolomiya, Ivano-Frankivsk region, the publication was restarted on the samizdat almanac "Karbi hir" ["Scars of the hills", which first came out in 1981].  The chief editor of this was D. HRYNKIV, while Rebryk was the executive secretary.

On 4 March 1990 he was elected State Deputy (MP) of Ukraine for the Tysmenetsky constituency and Deputy of the Regional Council.

On 6 April 1990, the Board of the Prosecutor’s Office of the Ukrainian SSR made an application to the Verkhovna Rada (parliament) to agree to bring criminal proceedings against Rebryk and several other Deputies for organizing political rallies without permission. The Verkhovna Rada turned down the application. Rebryk was part of the parliamentary opposition “Narodna Rada” [“People’s council”]. He was the chairperson of the Verkhovna Rada sub-committee on issues relating to victims of repression. 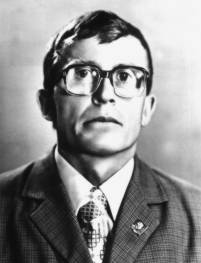