Osadchy was born into a peasant family working on a collective farm.

In 1958 he graduated from the Faculty of Journalism of Lviv University. He worked as the senior editor of a Lviv television studio, then from 1960 lectured at Lviv University. In 1962 he joined the Communist Party, and from 1963 – 1964 was a press instructor for the Lviv regional committee of the Komsomol.  He also became a member of the Union of Writers of Ukraine.  From 1965 he was senior lecturer in the Department of Journalism of Lviv University. He was the editor of the university newspaper which had a large print run, and the deputy secretary of the Party organization of the Faculty. He took part in the Lviv “Klub tvorchoyi molodi” [“Club for Creative Young People” (CCY)] “Prolisok” [“Snowdrop”].

Independently, without a formal PhD course and academic supervisor, he wrote and in 1965 successfully defended his PhD thesis on “The Journalist activity of Ostap Vyshnya (1919-1933)”.

Osadchy published articles in regional and national press both as a journalist and as a literary specialist, and also published literary works. The publishing company “Kamenyar” [“Mason”) put out a collection of his verse entitled “Misyachne pole” [“Moonlit field”], the entire print run of which was destroyed after Osadchy was arrested.

He was arrested on 27 August 1965 and charged with “anti-Soviet agitation and propaganda”.

On 18 April 1966 the Lviv Regional Court in a closed court hearing sentenced Osadchy under Article 62 §1 of the Criminal Code of the Ukrainian SSR to 2 years labour camp.  He was primarily accused of distributing the samizdat article “On the trial of Pohruzhalsky”[1], and also other samizdat material. The brothers Mykhailo and Bohdan HORYN, and M. Zarychevska were also tried in this case.  Osadchy served his sentence in the Mordovian political labour camps, working as a carpenter. During a search carried out in the camp in December 1966 Osadchy’s notebook with his translation of Garcia Lorca and poets of the Baltic States, as well as his own poems, was confiscated.

After his release, Osadchy wrote a biographical novel about Ostap Vyshnya “Genius of Laughter or a meeting with the leader”, where he revealed a little-known chapter in the relations of literary figures with the Party leaders in the 1920s.

In 1968 Osadchy distributed through samizdat his autobiographical novel “Bilmo” [“Cataract”].  In the opinion of H. Kasyanov, this novel is “a dazzling literary-philosophical essay in an existential mode, dedicated to the fate of the individual and his inner turmoil as a result of his confrontation with the system”.

In 1969 Osadchy signed a letter written by former political prisoners protesting against the trials of prisoners of conscience in labour camps and prisons. In 1970 he wrote a letter to the Secretary of the Union of Writers of Ukraine (UWU), Oles Honchar, in defence of Valentyn MOROZ.

After his release, Osadchy was unable to receive registration in Lviv and find a job, and was constantly detained “for infringements of the [internal] passport regime”. He finally succeeded in getting registration in the Lviv region and became a worker at a Lviv complex for the deaf and mute.

Via dissidents in Moscow, Osadchy had his novel “Bilmo” smuggled to the West where it first appeared in 1971. The book became known throughout the world and was translated into many languages. According to Nadya SVITLYCHNA, Osadchy brought the novel to show I. SVITLYCHNY who said that the book was very interesting, but needed good literary editing.  The book was effectively rewritten by Y. Supak, who established in advance, however, that Osadchy would keep his role in it a secret.

Osadchy was arrested for the second time on 12 January 1972 during the second wave of arrests, and charged with “anti-Soviet agitation and propaganda”.  The charges related to his articles, verse and prose, in particular, the novel “Bilmo”, and most importantly the fact that the novel had been smuggled abroad.

On 4 May 1972 the Lviv Regional Court, again in closed session, sentenced Osadchy under Article 62 §2 of the Criminal Code of the Ukrainian SSR to 7 years special regime labour camp and 3 years exile.  He served his sentence in the camp ZhKh-385-1, the village of Sosnovka, Mordovia. He played an active role in protest actions and hunger strikes, and wrote letters and appeals.

He was one of four political prisoners who signed a letter to the parliament and government of Canada on behalf of Danylo SHUMUK.

In 1978 Osadchy made an appeal to the American people, the Senate and to the President of the USA, Jimmy Carter, stating that he had been the victim of repression twice, moreover both times for the novel published in the West “Bilmo”, that he had been punished at the hands of criminals (in 1975 he had been beaten up in a transfer prison), and now they were threatening that he would be killed in exile. Osadchy asked to be granted American citizenship.

In 1978 Osadchy was awarded the Ivan Franko Literary Prize by the Ukrainian Diaspora.

In January 1979 Osadchy arrived at his place of exile in Mylva, 2-3 kilometres from the city of Troitsa-Pecherska in the autonomous republic of Komi. He worked as a boiler stoker.  After being allowed a ten-day holiday to visit his family in Lviv, he began working as a guard. Under unexplained circumstance the warehouse that he was guarding burned down. Osadchy was presented a claim for 1500 roubles, and on 4 October 1979 criminal proceedings were brought against him under Article 99 of the Criminal Code of the Russian SSR (“through carelessness destroying or damaging State or public property”)

Osadchy received a demand for 500 roubles as compensation for the damage and was told that if he paid this amount by 1 January 1980, the criminal proceedings against him would be suspended. The amount demanded was transferred to Osadchy by Andrei Sakharov.

After his exile, Osadchy returned to Lviv. For a long time he could find no work, then worked as a loader, caretaker and stoker.

In November 1987 Osadchy was one of the creators of the Ukrainian Association of Independent Creative Intelligentsia.

On 2 December 1987 unidentified individuals burst into Osadchy’s flat and beat him up.

From 1988 Osadchy was the editor of the samizdat journal “Kafedra” [“Rostrum”]. Three more collections of poetry were published.

In 1991 Osadchy defended his doctoral dissertation [higher than PhD] in the Ukrainian Free University in Munich.  From 1993 he was Associate Professor of the Department of Journalism in Lviv University.

[1]  This was an article about a fire in the Kyiv Central Scientic Library which destroyed a huge number of books of cultural and historical significance. The fire was deliberately lit and he article questioned the official version, suggesting that the act of arson was part of a policy to destroy Ukrainian heritage. It would seem that Pogruzhalsky, the man convicted of the crime was, in fact, employed by the KGB.  (translator’s note) 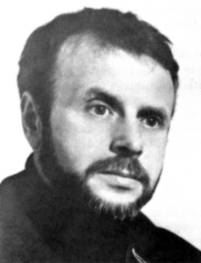