Lutsyk’s parents were both graduates of Lviv University, poets who knew many languages. At the end of June 1939, Lutsyk and his father were arrested by the Polish Guard, but they managed to escape and went underground.

After Poland was invaded and divided in 1939, Lutsyk joined the Forces of the Crown of Kyivan Rus’ (FCKR) – an army of monarchists. Its units fought in 1939 against the Polish, and then the Nazis and the Soviet Army. In 1939 FCKR was disbanded and many, including Lutsyk, moved over to the Organization of Ukrainian Nationalists (OUN), however the idea of proclaiming a monarchy in Ukraine continued to influence the activities of OUN.  Lutsyk was elected leader of the Skolyvsk region. Fleeing from the Soviet Army, Lutsyk ended up in Transcarpathia which at that time was part of Hungary. He was immediately arrested and faced execution. It was Hungarian supporters of the monarchist idea which saved his life. He was deported to the part of Poland occupied by the Nazis. He worked there as a teacher.

For poems with an anti-Hitler message he was arrested by the Gestapo and thrown into a cell for those sentenced to death, however underground resistance people working as guards in the camp helped him to escape.  He then renewed his contacts with activists of OUN, and in 1940 he returned to his home village, now under Soviet occupation, where he began OUN activities.

In autumn 1941 several hundred people from the villages were taken by the Nazis to Germany. Lutsyk ended up in Berlin where he worked in factories, at the same time studying in the Ukrainian University.

At the end of April 1943 he arrived in the Carpathian area on holiday and headed the district division of OUN. Having uncovered a Germany punishment camp in one of the villages, Lutsyk organized an attack. The Gestapo guards and camp administration were killed and more than 500 prisoners released.

In June 1944, Lutsyk defended his degree thesis in the History and Geography Faculty of the Ukrainian University in Berlin and returned to Ukraine where he immediately became involved in the struggle against the German occupiers.

In August 1944 he was seriously injured in a battle with Hungarian Magyars.

At the end of October 1944, Soviet troops entered Skola. Lutsyk remained in the village where he was born and on 28 October 1944 he was arrested by the NKVD.

On 29 December of the same year he was charged by a military tribunal of the NKVD forces in the Stanislavsk (Ivano-Frankivsk) region under Articles 54-1”a” (“Treason against the homeland”) and 54-11 (“Involvement in a counter-revolutionary organization”) of the Criminal Code of the Ukrainian SSR.  In accordance with Article 2 of the Decree of the Presidium of the Supreme Soviet of the USSR “On measures of punishment for German-fascist villains guilty of murdering and torturing the Soviet civilian population and Red Army prisoners of war, and for spies, traitors of their country from among Soviet citizens and their accomplices” for 19 April 1943, he was sentenced to 15 years labour camp with loss of civil rights for 5 years. He was charged with his participation in OUN as a messenger.

In 1945 in the camps of Dzezkazgan (Kazakhstan), Lutsyk created an Academy where the professors were from among the prisoners and the students those who had not completed their higher education. However within a month, after somebody informed on them, all the “academy” people were arrested. Lutsyk was sent to Vorkuta. In all the camps of the GULAG that he was in, he created underground groups which carried out work explaining policy, etc among the prisoners, and organized protest actions against arbitrary rule from both the administration and imprisoned criminals.

He was released on 14 June 1956 on the ruling by a commission of the Presidium of the Supreme Soviet of the USSR reviewing court cases.  In November of the same year, he was rehabilitated.

Lutsyk settled in the city of Stryi in the Drohobych region and immediately set to work on organizing an underground network of OUN not only in western regions, but also in the east, and in areas where there was a large population of Ukrainians in Russia, Byelorussia and Moldavia.

From April 1957 he was forced to go underground and involved himself in preparing a General Meeting of OUN.  This took place on 9 September 1957 on the Makovka Hill, near the village of Volosyanka in the forest.

Lutsyk was elected lifelong leader of this organization. Its objective was the overthrow of the communist single-party regime.

On 19 November 1957 Lutsyk was arrested. During the search, they found a pistol, money and a poem “O krayu miy ridniy” [“O my homeland”], which he had written in summer 1956 in which he laments over the harsh fate suffered by Ukraine.

On 19 December 1958 the Drohobych Regional Court sentenced him under Articles 54-10 {“membership of a counter-revolutionary nationalist organization”]and 196 (“violation of the surveillance regime”) of the Criminal Code (CC) of UkrSSR to 8 years deprivation of liberty, the first three years in prison, and to 5 years exile beyond the territory of the Ukrainian SSR.

Since in the course of a year’s investigation, as well as during the actual trial, the NKVD were unable to prove Lutsyk’s involvement in preparing uprisings in the camps, in particular that in Vorkuta in 1953, immediately after the sentence of the Drohobych Regional Court came into force, a new investigation against Lutsyk was launched on the basis of “newly discovered circumstances”.  Lutsyk was charged with creating and leading the GULAG underground when serving his sentence under the 1944 case, restarting the anti-Soviet underground organization OUN after his release in 1956.

Lutsyk was convicted for the third time while in the camp. On 12 April 1961 the Lviv Regional Court sentenced him under Articles 56 (“State Treason”) and 64 (“creation of an underground nationalist organization”) of the CC of the UkrSSR to death, commuted to 15 years deprivation of liberty, the first 5 of which were to be in prison, including the sentence from 1958.  He served his sentence first in the Vladimir Prison, then in the Mordovian political labour camps.

He was freed on 18 November 1972 and under convoy taken to where he was to live in the city of Rybnytsa, the Moldovan Autonomous SSR.

Lutsyk renounced his Soviet citizenship and demanded that he be allowed to leave for Austria.

On 31 June 1973, he was detained for vagrancy and sentenced on 17 September of the same year by the Rybnytsa People’s Court under Article 221 §1 of the CC of UkrSSR to 2 years harsh regime labour camp.

In 1974 the Supreme Soviet of the Moldovan Autonomous SSR revoked this sentence, however immediately afterwards, the Rybnytsa District Court declared him mentally unfit and sent him to the Dnipropetrovsk Special Psychiatric Hospital (SPH).  Lutsyk did not, moreover, undergo any psychiatric examination however the signatures of two psychiatrists who had never set eyes on him enabled the court to issue this extraordinary ruling.

In Memorandum No. 18 of the Ukrainian Helsinki Group (UHG) “On discrimination against Ukrainians with regard to their right to emigrate” from December 1977, sent to the Belgrade Congress of 35 States, Lutsyk is mentioned. Information about him was also included in the “Information bulletin of the Working Committee against Psychiatric Abuse for Political Purposes. In 1977 an examination was carried out in the Serbsky Institute in Moscow which not only removed the diagnosis, but established that Lutsyk had never been mentally ill, and on 1 September 1978 he was released.

Lutsyk knew O. MESHKO, P. SICHKO, he corresponded with I. ZISELS, with dissidents (Shestydesyatnyky [Sixties activists], as well as those who became active in the 1970s).  He knew A. Marchenko and L. Bogoraz, who helped him meet A. Sakharov. With the help of A. Ginsburg he was able to live illegally for a period of time in Tarus.

Lutsyk spent many years collecting documents about the history of the OUN and material concerning the GULAG resistance.

During the years of perestroika, Lutsyk created a Society of Ukrainian Former Political Prisoners of the Skolyvsk district and became its chairperson. He was also a member of the district Commission on restoration of the rights of the rehabilitated.

He has now moved away from politics, and without any help from others, he continues to collect documents about the GULAG resistance.

He lives in the city of Skola, in the Lviv region, in a cold, decrepit little house.. 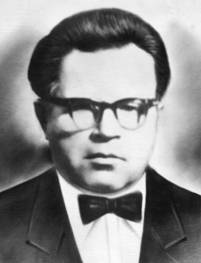