Kandyba was born into a peasant family. In 1945 the family was forcibly resettled in Ukraine. In 1953 Kandyba graduated from the Law Faculty of Lviv University, and worked up till 1961 in the city of Hlynyany in the Lviv region as a notary, a judge in a people’s court and as a lawyer in court.

In February 1960 he met the lawyer L. LUKYANENKO who was working as a court lawyer in the same consultancy as him. He supported the idea of creating an illegal Marxist party, Ukrainska Robitnycho-Selyanska Spilka [Ukrainian Workers’ and Peasants’ Union] (UWPU). In summer 1960 he received a draft program for UWPU and began active work. In November 1960 the program for the UWPU was discussed in Kandyba’s flat. Its ultimate goal was the creation of an independent Ukraine with secession from the USSR after a referendum was held. Kandyba distributed the newspaper “Nashe slovo” [“Our word”] which was published abroad, and told various people about the UWPU’s program.
On the evening before they were planning to discuss a redrafted version of the program, on 20 January 1961. 7 members of the group were arrested. Kandyba was charged with “State Treason” under Articles 56 and 64 of the Criminal Code of the Ukrainian SSR, and sentenced on 20 – 24 May 1961 to 15 years harsh regime labour camp. He served his sentence in the Mordovian political labour camps (camp ZhKh-385/11, Yavas) and in the Perm political labour camps (VS-389/35, Vsekhsvyatskaya in the Chusovoi district).
In 1962 in Yavas he received a 1 year prison term and was sent to the Vladimir prison.  His protests against the harsh regime led to his being convicted on 20 March 1967 by the Zubovo-Polyansk District Court of Mordovia to another 3 year prison sentence (served in the Vladimir prison).  On 25 August 1969, together with L. LUKYANENKO and M. HORYN, he smuggled their “Address to the UN Human Rights Committee” about the genocide of political prisoners to the outside world.
Kandyba was released in April 1976. He could not get registration in Lviv where his elderly father lived and was forced to rent a room in the city of Pustomyty 20 kilometres away from Lviv. The only work he was able to get was in a workshop repairing electrical devices or as a boiler stoker.

Kandyba was a founding member of the Ukrainian Helsinki Group (UHG) which was officially announced by M. RUDENKO in November 1976.
Kandyba actively participated in the work of the Group, unceasingly corresponding with political prisoners while himself continuing to be under the administrative surveillance which had been imposed on his release. In 1977, after a trip to Moscow where Kandyba met with members of the Moscow Helsinki Group, the surveillance was continued, effectively because of his refusal to make a public recantation to the press and on television (in exchange for which he was promised registration in Lviv and work according to his profession). The regime of surveillance was now tightened, for example, he now had to be at home not at 9 p.m. but at 8.

In May 1978 Kandyba was summoned to the Lviv department of the KGB and asked about UHG documents which carried his signature. These documents included letter № 2, which Kandyba said that he was seeing for the first time, adding that if it was a document of the Group, then he would acknowledge his co-authorship.  In the same year he was offered registration in Lviv and work if he left the UHG.  His refusal to compromise led to a new order on continuing surveillance control being produced.

In autumn 1978 Kandyba received a formal invitation from his sister to emigrate to the USA.  The KGB during their next “conversation” made it clear that they were not pleased with this invitation.  He was refused permission to emigrate.

On 3 February 1980 Kandyba again submitted his documents for emigration to the USA,  At the beginning of April the surveillance was again renewed for infringing the administrative surveillance regime – on 20 March he had not spent the night at home (he worked as a stoker and had been on night duty).  On 18 April he received a rejection of his application for an exit permit, dated 14 March 1980.

On 24 March 1981 Kandyba was arrested and charged with “anti-Soviet agitation and propaganda” under Article 62, § 2 of the Criminal Code of the UkrSSR.  He was accused of being the co-author and of distributing 18 documents of the UHG, an appeal in defence of the UHG, found during a search of M. HORYN, and a document which, Kandyba says, he had had nothing to do with.  On 24 August 1981, the Lviv Regional Court sentenced him to 10 years special regime labour camp and 5 years exile and designated him a particularly dangerous repeat offender.

On 5 September 1988 Kandyba was “pardoned” by decree of the Presidium of the Supreme Soviet of the USSR.  He was freed from Lviv prison only on 9 March, after he had already declared a protest hunger strike and US President Reagan had called for his release.

On 8 April 1990 Kandyba created and became the first head of the All-Ukrainian political association – “State Independence of Ukraine” (SIU). He was the founder and then the editor of the association’s newspaper "A nation unconquered”. 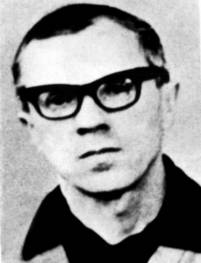