Horska was born in Yalta into a family belonging to the Soviet nomenklatura.  From 1941 – 1943, she and her mother survived the two winters of the Leningrad Blockade. She was a graduate of the Kyiv Fine Arts Institute, where she specialized in painting. She painted portraits and worked in easel painting, as well as using lino cuts and ceramics.  Large-scale works (on the end walls of buildings and schools, on a wall of a jewellery shop) in Donbass were carried out together with V. Zaretsky and others. She and Zaretsky shared a studio where friends gathered, made presentations and held discussions on various topics.

Horska was one of the organizers of “Klub tvorchoyi molodi” [“Club for Creative Young People” (CCY)] (1960 – 1964).  Together with V. SYMONENKO and L. TANYUK, she discovered the places of burial of victims of the NKVD at the Lukyanivske and Vasylkivske Cemeteries in Bykivnya (1962 – 1963), and informed the Kyiv City Council (“Memorandum No. 2”).  Soon after this V. SYMONENKO was brutally beaten up.

In 1964 Horska worked together with P. ZALYVAKHA, L. Semykina, H. Sevruk and H.Zubchenko to create a stained-glass window entitled “Shevchenko. Mother” in Kyiv University.  The window portrayed Taras Shevchenko with an angry expression with one arm around a woman betrayed – symbolizing Ukraine, and with the other raised high and holding a book. Below were the words: “I will glorify these silent slaves, and my words will stand guard over them” The window was destroyed by the University Administration, with the commission called qualifying it as ideologically alien.  “Shevchenko is behind a grate (the grate was from the frame used to fasten the glass).  The interpretation is totally formalistic, and incompatible with Shevchenko’s image.  They should have shown how Shevchenko’s dream had been fulfilled …”, and so on. Horska and L. Semykin were both expelled from the Union of Artists, but were reinstated a year later.

Horska was summoned to the KGB for questioning as a witness and for the one-to-one specific KGB-style “conversations” full of warnings and threats.

In 1965 a large number of Horska’s friends and people she knew were arrested. That year was to mark the beginning of her active participation in the resistance movement. On 16 December 1965 she sent a statement to the Prosecutor of the Ukrainian SSR regarding the arrests which was to be published in samizdat. Following the trial of Y. Hevrych she sent another statement, as well as two complaints in December 1965 and March 1966 to the Prosecutor, concerning Hevrych’s case.

She gave both moral and material support to families of political prisoners and corresponded with them, in particular, on a regular basis with O. ZALYVAKHA.  In April she signed an appeal in his defence. Human rights activists who had served their sentences would turn to her for help.

She was also present at the trial of V. CHORNOVIL on 15 September 1967 in Lviv, where, together with a group of people from Kyiv, she expressed protest at the illegal way the court was run. In April 1968 she was one of the 139 people who signed a letter of protest addressed to the heads of the Communist Party of the USSR and of the Soviet State which demanded that a stop be put to the practice of illegal trials. This text was included in the samizdat collection “Protses chetyryokh” [“The trial of four”] about the Ginsburg and Galanskov case. A wave of administration persecution and KGB pressure began against those who had signed the letter. Rumours spread in Kyiv and throughout Ukraine about the existence of an underground terrorist Bandera-supporting[1] organization led by Western security services. Horska was named as one of the leaders of the alleged organization. On 15 June 1968 she, together with seven other people, was expelled from the Union of Artists of Ukraine.

She was followed, sometimes ostentatiously, and also threatened by unidentified individuals. In 1970 she was summoned for questioning to Ivano-Frankivsk in connection with the case against V. MOROZ, however she refused to give evidence. A few days before her death, she registered her protest with the Supreme Court of the Ukrainian SSR at the unlawfulness and severity of the sentence.

On 28 November 1970 Alla Horska was murdered in the village of Vasylkiv in the Kyiv region.  The funeral, which was to be held on 4 December (on that day people from Kyiv, as well as from other cities, gathered in her studio where her friends had organized an exhibition of her work), was suddenly changed by the authorities to 7 December, supposedly in the interests of the criminal investigation. It was not permitted even for a few minutes to take the coffin with Horska’s body either into her home or into the studio. Nonetheless, 150-200 people still gathered at the cemetery, where Y. SVERSTYUK, V. STUS, I. HEL and others spoke. The investigation run by the Prosecutor’s office of the Kyiv region decided that Horska had been killed by her father-in-law, due to personal animosity, and that the latter had then killed himself. Rumours were rife throughout Ukraine about these two deaths, and Western radio stations put forward their versions. Conversations about Horska’s death and the circumstances in which she was murdered were cut short by the authorities.

Even after the collapse of the USSR, the Prosecutor’s office and security service of Ukraine, despite calls from the public, did not give out any information about the death of Horska, and made available only the investigation file. An analysis of this file shows that the investigation was incomplete and ridden with contradictions, and that it had been carried out with infringements of investigative norms, i.e. falsified. One can also see common features between Alla Horska’s murder and other political murders in the USSR.

[1]  Stepan Bandera was the leader of one of the factions of the Organization of Ukrainian Nationalists. 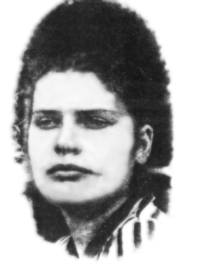